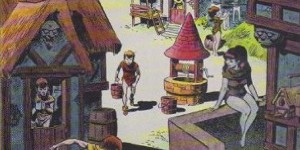 Welcome back to a new edition of Fabulous Finds, brought to you by your host, Greg Turner.  This week I’ve only taken a couple of steps over to my bookshelves and pulled out my copy of the 1978 limited edition hardcover book entitled; The Wizard King.  This graphic novel is the brainchild of writer/artist Wallace, or Wally as he is better known as, Wood.  The book is black, faux leather, with the title The Wizard King by Wallace Wood in silver ink.  This is covered by an illustrated dust jacket.

Here is that front dust jacket, as drawn by Mr. Wood: 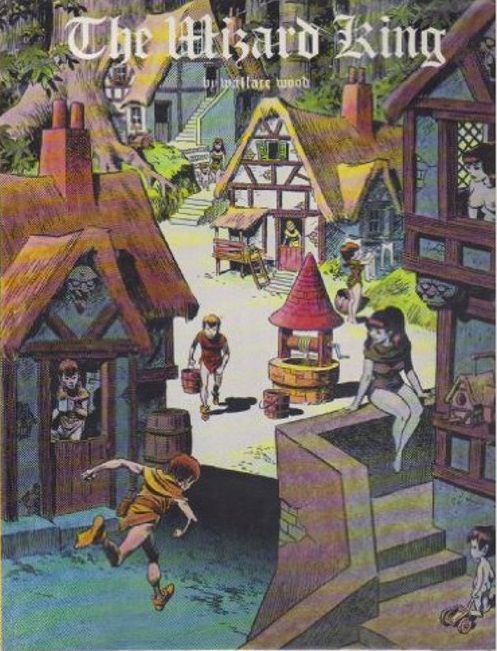 The package is handsomely put together and includes illustrated front and back end pages, drawn by Wood.  The story is the first part of a planned trilogy.  It is similar in scope to the writings of J.R.R. Tolkien in some ways but obviously focusing on the artwork as drawn by Wood,  Needless to say, you’ll find far fewer words here than in Tolkien’s famous books.

Wood introduces the reader to the Immi, a race of small forest dwellers (if it helps to compare them to Tolkien’s Hobbits, feel free) in Chapter One, entitled; Shadows With Eyes.  One of the young immi, named Odkin, rushes to his father saying he has seen a shadow, a shadow with eyes.  Once this has been confirmed the Immi decide to send one of their own to report this siting to the wizard, Alacazar.

After a bit of comedy relief, Odkin finds himself with the duty of making the journey.  After facing many trials along the way, Odkin arrives at Alacazar’s cottage.  The next day, Alacazar reveals a prophecy that one day a hero would come and free a magic sword that has been thrust into a tree (okay, now think about the sword Excalibur and the King Arthur legends).

Alacazar sends Odkin to find the sword.  Along the way Odkin encounters the man known as Iron Aron.  Of course, he too is after the magic sword.  The decide to search together. Eventually they find the sword and Iron Aron is unable to remove the sword from the tree, but does manage to break it.  I guess they just don’t make magic swords like they used to! Aron’s efforts have also made him unconscious.

Odkin picks up the hilt with the broken blade and it begins to glow and since he is so small the broken off shaft is perfectly suited to his size.  It is at this point that a vision of the Wizard Kind appears in the sky, looking down on Odkin.  Odkin decides to leave and return to the wizard, Alacazar.  Aron wakes up, digs out the rest of the sword blade from the tree and decides that Odkin has stolen his prize and sets off to find him.

In chapter two, entitled; Mirror of Memory, Odkin makes it back to Alacazar, with the assistance of a creature named, Weer.  One of Alacazar’s assistants.  Alacazar reveals the past to Odkin, of the rightful King’s downfall, which was caused by a demon named; Amnot. 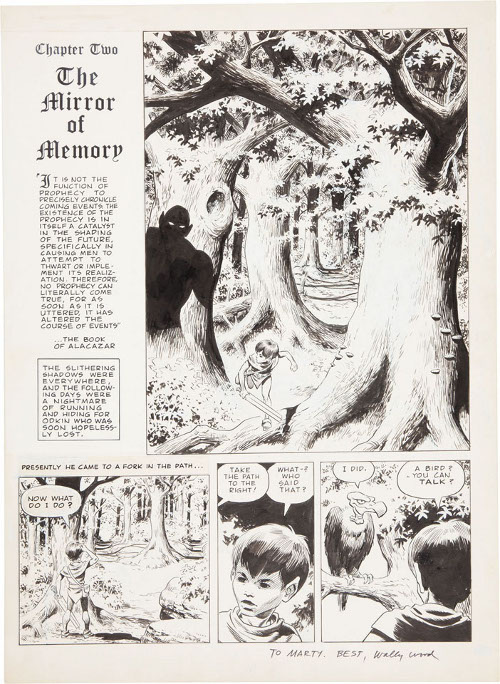 Chapter three, Lord Vandall’s Decision, begins with Odkin’s return home to Immiville.  His fellow Immians turn him away, as they have been warned of the danger Odkin now holds.  It’s at this point Aron shows back up, just in time to help Odkin turn back a horde of Unmen.  Odkin flees back into the forest.

in the fourth and final chapter, entitled; The Laughing Dead, Odkin, Aron and Alacazar are reunited and have to face off against another horde of Unmen, lead by the Demon Amnot.  Alacazar is slain but gets Odkin to promise to go free the true King.  And so the first book of the trilogy comes to and end.

I also have a soft cover version that was published by Vanguard Productions in 2004.  This version is in color and is actually entitled; The Wizard King: The King of the World.  An interesting note is that wood drew all of the women in his story in the nude, i.e. sans clothing.  In the reprinted edition twenty-five years later the publisher decided to add clothing to the female characters.

Here’s that book, as well: 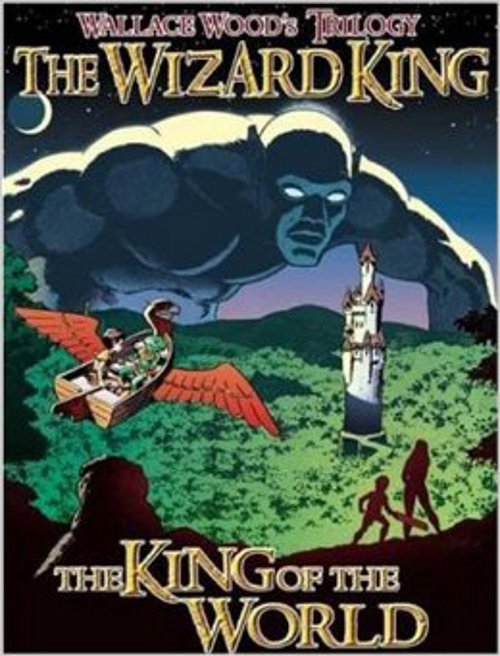 I’m pretty sure the second book in the trilogy was published, but I don’t think the third one ever was.  And truthfully, I only own the two versions of this first story myself, so if you have found this interesting, you might want to see what is out there in regards to the rest of the storyline.

Thanks, as always for stopping by and please tune in next week for a new RETRO REVIEW.   Happy Halloween!