From the Sea of Carpenter Movies Comes…The Fog! 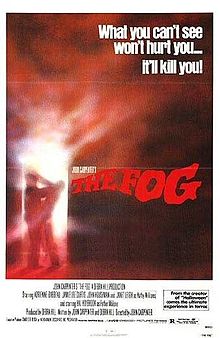 A Plethora of Familiar Faces

In 1978 the duo of Carpenter and Hill were on top of the world. They had just taken $325,000 and made the groundbreaking juggernaut known as Halloween. The Fog was the first film the two released after Halloween, and they absolutely loaded it with familiar faces. The Fog has a ton of people with appearances in notable horror films. The Fog puts Adrienne Barbeau (Creepshow), Jamie Lee Curtis (Halloween), Janet Leigh (Psycho), Tom Atkins (Halloween III: Season of the Witch), Nancy Loomis (Halloween), Hal Holbrook (Creepshow) and Charles Cyphers (Halloween) all in the same film, which is crazy.

The Fog is a story about a small coastal town called Antonio Bay getting ready to celebrate its centennial, but Antonio Bay’s horrifying past catches up to it. 100 years ago six of the soon-to-be founders of Antonio Bay were approached by the owner of a ship, the Elizabeth Dane, hoping to found a new colony near where they were. The problem they had with that was the fact that the ship owner Blake had leprosy. The six men lit fires on the beach at night near some rocks and the Elizabeth Dane began to approach, thinking they were being welcomed. The ship sank and all onboard were killed. The six men stole the gold aboard the ship and founded Antonio Bay. Now, 100 years later, the residents of Antonio Bay are going to have to pay for the sins of their forefathers.

When The Fog was released fans and critics found it to be underwhelming, but not bad. It was a very middle of the road film critically, but a success commercially, making about $20,000,000. I personally think that The Fog is awesome. It moves at a slow pace, but it holds my attention every time I see it. The setting is amazing and keeps a subtle and creepy vibe going throughout the film, especially coupled with John Carpenter’s score. You never really get a good look at the creatures, which I think works. Whether intentional or not, The Fog leaves the details of the creatures to your imagination, which is infinitely more terrifying than anything that can be shown on screen.

The cast didn’t disappoint, either. Some of the actors and actresses I mentioned earlier have bigger roles than others, but they all did what they set out to do. Adrienne Barbeau did an amazing job working within her limited space and Janet Leigh showed us that even 20 years after Psycho she could still bring it. Tom Atkins did a great job, but this movie came down to the women and their performances.

While The Fog didn’t quite live up to the expectations of the masses after Halloween, it’s still a classic. It doesn’t get the praise that it deserves. John Carpenter has been responsible for many great movies and The Fog shouldn’t be overlooked.