I WILL TELL YOU #71: The Unsinkable Spider-Man

I Will Tell You #71:
The Unsinkable Spider-Man

Happy New Year, everybody! It’s a brand new day! For us and Spider-Man! 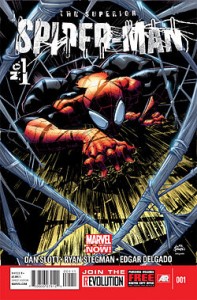 Unless your smartphone is broken, your internet is out, and you’ve gained too much weight over the holidays to climb the steps out of your parents’ basement, you undoubtedly know that tomorrow sees the release of the anticipated and already-controversial Superior Spider-Man by Dan Slott and Ryan Stegman.

The story, ambiguously stated to avoid spoilers, features a Spider-Man who’s not exactly Peter Parker. And it’s one that’s been decreed already by some as sacrilege, a travesty to the legacy of the character, a marketing stunt, etc. And while, in fairness, it can’t be condemned or praised sight unseen, I can say that it does seem like a pretty cool idea, it had a great lead-in, and to put things in perspective, we’ve seen Marvel do far worse things to the character than this.

Like what, you want to know? Well, far too many for a single column. But I can narrow it down to a few doozies, that’s for sure. So, spin a web, sit back, and I will tell you:

The 5 Worst Things Marvel Ever Did to Spider-Man, and By Extension, Us Readers: 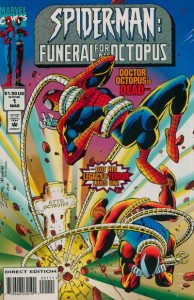 5. Actually Publishing A Comic Called Funeral For An Octopus
Yes, they did, back in 1995. Spider-Man: Funeral For An Octopus was a four-issue mini-series that tied into the justifiably-maligned, overly-long, and hopelessly-convoluted Clone Saga from back then, and was symbolic of everything that was wrong with the comic book market in those days. It was a wasteful mini that did nothing to advance this wasteful saga. The story involved Spider-Man and The Scarlet Spider (remember him?) and who knows else battling for Doc Ock’s mechanical arms, after Ock died the first time. Or maybe it was the second; I forget. Spidey ends up being the one getting ahold of them, but as far as I know nothing ever came of this. It was poorly written and was nothing more than an excuse to put out a comic that featured “Spider-Man” and “#1” on the same cover. Oh, and it’s the stupidest name ever for a comic. And it’s a perfect example of the wretched dreck that Spider-Man comics were during this era. The Clone Saga is an all-too obvious candidate for this list, so I’m getting it out of the way early. 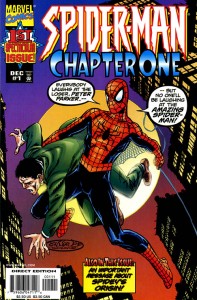 4. Thinking Stan Lee’s Early Ideas Could Be Improved By John Byrne
Remember Spider-Man: Chapter One? Well, now you do. Sorry about that. A few years after the Clone Saga ended, someone at Marvel thought that John Byrne (whose work I normally did and still enjoy) should launch a series that retells Spidey’s early days for a modern audience. You know, just in case they were all griping about how bad Stan Lee’s original stories were. And Byrne delivered said series with a whole slew of unnecessary reworks. Like having Uncle Ben give Peter a PC instead of a microscope. Or revealing that The Vulture couldn’t really fly, but instead had to levitate over scattered magnetic generators. Or, perhaps the most uncalled for tweak of all: tying Spidey’s origin into that of . . . Doc Ock. Yep. Hmm . . . two bogus Doc Ock stories on this list. No wonder people are worried about Superior Spider-Man. This series last about a year, was quickly dismissed and forgotten, and; surprise! None of these changes ever stuck. 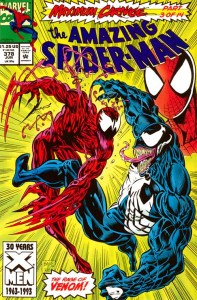 3. Maximum Carnage
This was an unnecessarily violent, highly-contrived, and totally unneeded storyline from 1993 that plagued many a Spider-fan for months as they endured this mindless gorefest that crossed through a dozen or so issues of the various Spider-Man titles that spring. Essentially, Carnage and bunch of other super-powered psychopaths rampage through New York and kill hundreds for no reason whatsoever. The end. This was just before the onset of the impending Clone Saga and was a stain on every Spidey title it touched, some of which had been enjoyable up to this point. It was an unwanted embrace of the grim and gritty era at its peak, and had no business being featured in such a prominent storyline. And the name inspired an even worse subplot during the Clone Saga called Maximum Clonage. But why stop there? They could have done an arc where all the characters gorge on cole slaw, and call it Maximum Cabbage. Or they could have all become numismatics, which would inspire Maximum Coinage. Or they could just play cards all night, which would be Maximum Cribbage.

On the upside, though, this story did not feature Doc Ock. 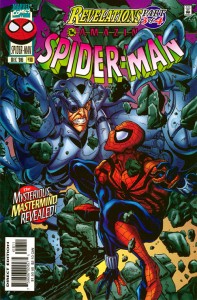 2. Peter and Mary Jane’s Forgotten Baby
In a happier alternate reality, Baby May grew up in her daddy’s sticky footsteps and became Spider-Girl. But in ours, Mary Jane was poisoned before giving birth, and later awakened to be told that she had miscarried. This was a lie told to MJ and Peter, though, to cover the fact that not only had the baby been born, alive, but had been immediately taken by Norman Osborn to parts unknown. Never to be seen again. Or spoken of, not long after, in apparent case of mass-amnesia in the Spiderverse. This type of occurrence has happened in pop culture before, like when Richie Cunningham’s older brother left for basketball practice in one episode of Happy Days, never to return, and never to be mentioned again. Perhaps Baby May, Chuck Cunningham, and the Brady Bunch’s dog and cat are now living peacefully in the nether-realm, somewhere. But regarding Baby May, it seemed that Marvel figured out that Peter and MJ having a baby was a bigger mistake than them getting married. So, why not a miscarriage? It would be very sad, sure. But it’s not without precedent. It happened to Sue Richards, after all, in an issue of Fantastic Four, by . . . John Byrne, when Reed fought . . . Doc Ock. Hmmm . . .

But hey, this is Marvel. Nothing can be that simple. Just look at how they eventually decided to end Peter and MJ’s marriage, by having MJ essentially strike a deal with the devil. Yeah; that’s a lot better than a divorce.

And, the worst thing Marvel ever did to Spider-Man, and by extension, us readers, is . . . 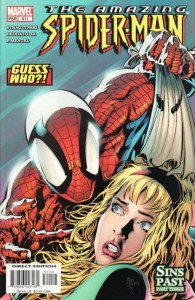 1. The Goblin Twins
Yeah, you had forgotten about them too, didn’t you? Well, we’ve all wanted to forget how, in a 2004 story by J Michael Straczynski, it was revealed that years earlier, Gwen Stacy had sympathy sex with Norman Osborn, the man who eventually killed her. It was also revealed that Peter and Gwen themselves had never done the deed. Now if having consensual sex with your worst enemy’s girlfriend isn’t the ultimate revenge, I don’t know what is. If I were Norman, I would have been content at that point to never go after Peter again, other than to give him a little nod and a wink if they ever crossed paths again. But it’s always hard to forget about that one night of sex when the baby arrives. Or babies, in this case. Only unlike Baby May, these babies grew into adults and eventually faced off against Spider-Man. But very much like Baby May, these offspring, and the reviled storyline associated with them, have largely been dismissed by fans, and even the most ardent continuity geeks have been willing to let this absolutely repugnant storyline slide.

That’s only my top five. There’s still the whole One More Day / Brand New Day / One Moment in Time debacle. And Peter revealing his identity to the world, which spawned all of that. Oh, and don’t forget the Spidermobile. Marvel has done a lot over the past fifty years to seemingly and intentionally tank this character, but he’s never gone down. He’s come back strong and remained an icon. He’s unsinkable.

So, even if this whole Superior Spider-Man thing ends up being as dreadful as any or all of the above, there’s no cause for concern. If it’s ill-received, it’ll be dismissed. Or forgotten. Or retconned. And then, undoubtedly, relaunched. If so, look for The Unsinkable Spider-Man #1, on sale soon.

And, if it turns out to be as promising as it looks, there’s still the inevitable return of the unsinkable Peter Parker we all know. And that, by the nature of this story, will be, well, amazing.