The Innkeepers is a Great Way to Prevent Sleep 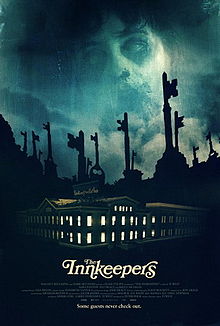 The Innkeepers is a film from 2011 that was written, directed and co-produced by Ti West. It stars Sara Paxton and Pat Healy. It has an approximate running time of 101 minutes.

The Innkeepers is Endearing and Underrated

I had seen a previous film of Mr. West’s entitled House of the Devil (which I will review at a later date) and was pleasantly surprised at the quality of this relatively unknown (at least to me) film. It was a no brainer that I would be checking out this movie. The Innkeepers is a classic “haunted house” story in which a hotel, the Yankee Pedlar Inn, is inhabited by spirits of those who had some sort of connection to it during their life. The hotel is in its last weekend of operation and is being run by two young employees, Claire (Sara Paxton) and Luke (Pat Healy).

I fell in love with the character of Claire almost immediately. The characterization and dialogue was absolutely nailed by Paxton and she brought the character to life. Claire had a certain charm about her and as I watched the movie I started to react to situations involving her like she was my little sister. Luke was a standard supporting character that brings the comic relief. Healy did a great job of playing the quirky nerd type without overdoing it to the point of annoyance. He was just a guy who was into what he was into. Working at a comic shop, I can respect a guy like that.

What I loved about this movie is that it doesn’t fit the “more sex, gore and profanity” archetype of modern horror films. It’s clear that Ti West is an appreciator of old horror and classic storytelling. Instead of throwing stuff in our face this movie takes us by the hand and guides us through the story. I’m not a fan of when you spend too much time trying to figure out what’s going on and not enough time just enjoying what’s on the screen.

It’s Not Perfect, But It Wastes Little Time

The Innkeepers isn’t perfect, though. There are some moments that are clearly telegraphed. There is one moment in particular that I spotted coming a mile away and that was kind of a bummer. The epilogue of the film I felt was unnecessary, but that’s just coming down to personal preference. I don’t feel every movie (horror films in particular) need to have every piece of the story wrapped up. I like it when things are left to the imagination. Again, that’s just my preference and not necessarily something Ti West did wrong. An issue I can see people having is the pacing of the “scares” is pretty slow. They don’t really get going until you’re well into the movie. Personally, I don’t mind a long suspenseful build-up as long as it pays off in the end and for me it did.

When it was all over, I felt that was time very well spent. I thought the acting, script, and cinematography were great and I highly recommend it to those who love a good, old fashioned ghost story.