I WILL TELL YOU #73: Top 5 Marvel Titles That Are Wholeheartedly Totally Awesome-like

I Will Tell You #73:
Top 5 Marvel Titles That Are Wholeheartedly Totally Awesome-like

Hi folks;  there will be no fables, personal anecdotes, or long-winded stories this week. It’s another back-to-basics look at the medium we all love: comics. And specifically, several comics that many of us really do seem to love. More specifically, Marvel comics; this week, anyway. So without further delay, I will tell you all about some of my favorites. 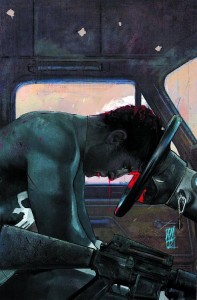 5. Daredevil: End of Days (Bendis / Mack)
Apparently, writer Brian Michael Bendis didn’t feel that he put Matt Murdock through enough hell during his five year run on Daredevil that ended in ’06. So he makes up for that shortage by putting future Matt through an even worse ordeal: a grisly death at the hands of his worst enemy. But that’s only the beginning of this eight-issue mini-series. Set in the near-future like the various The End titles Marvel did years ago that featured many of its characters meeting their demise, this story instead unfolds after the character’s death, with reporter Ben Urich talking with various individuals who had known Matt Murdock, in an effort to piece together the events that led to Daredevil’s final battle. It’s a very gripping and compelling mystery of sorts, one that brings forth even more fascinating questions about what happened with Daredevil prior to this point. And it’s great to see Bendis and artist David Mack collaborating on the character again. Ironic that, years after their last Daredevil story, the two creators have never been in better form. 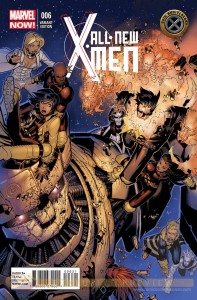 4. All-New X-Men (Bendis / Immonen)
What, Bendis again? Yep, only it’s not the gritty-noir BMB from the aforementioned Daredevil: EoD, but instead a Bendis more akin to the one we saw the past several years on just about any comic with the word Avengers in the title. And yeah; that’s a good thing, as he brings the not only the same kind of character interactions that he did so often in The Avengers, but also comes up with a great hook in this new Marvel Now series: what would happen if the original younger, inexperienced X-Men were to meet the modern-day X-Men; especially a post-Phoenix, neo-ultra-revolutionary Cyclops? The answer: everything you might be guessing, and far more. This could finally be the X-title that brings back those who had abandoned the franchise (cough *me* cough) long ago. It’s actually fun; an adjective rarely associated with the X-Men in recent . . . decades. Artist Stuart Immonen is as capable as ever, although I’m really not sure what to make of The Beast’s new look yet. You drew a mean-looking traditional blue Beast in those mind image sequences, Stu; just sayin’. 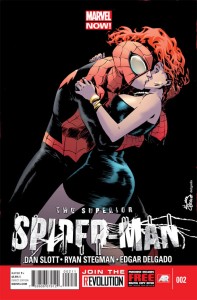 3. Amazing / Superior Spider-Man (Slott / Ramos / Stegman)
Before the first issue of Superior Spider-Man shipped last week, all of the attention had been on the game-changing “final” issue of Amazing Spider-Man, #700. But lest we all forget, #698 delivered a kind of comic industry equivalent of a Sixth Sense-type shock that had jaws dropping in comic shops everywhere. No spoilers from me; either you already know, or you can easily find out elsewhere. It was that surprising, and it was that good. More surprising, perhaps, is that writer Dan Slott has given us the best Spider-Man in modern-day history, especially in light of the fact that it was the same Dan Slott who also gave us the horrid Spider-Island “event” and the preceding Brand New Day arc that did nothing but throw away three decades worth of character growth. In his defense, though, these kinds of events historically have often been force-fed to reluctant writers by insistent editors, and it seems as though Slott was signed up to tell a lot of stories that he didn’t really have his heart set on. But freed from editorial restraint and event-driven mandates, Slott has prospered on the title and taken the character into fresh, uncharted territory. Personally, I welcome the art of Ryan Stegman on the new title, as artist Humberto Ramos made Amazing very difficult to look at. I mean, artistic style is one thing, but dude; come on; all of the characters all look like road kill from a bad manga. 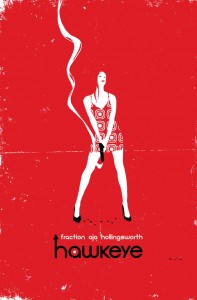 2. Hawkeye (Fraction / Aja)
Probably the surprise comic of 2012, writer Matt Fraction tells the story of Hawkeye’s life when he’s trying not to be Hawkeye. Possibly one of the best normal-guy-against-impossible-odds comics ever, Fraction is probably the only writer who could put Hawkeye in a room full of super-villains and have him not only plausibly escape, but win. He could probably do the same putting him in front of a pack of charging, over-caffeinated rhinos after losing his bow and have him walk away sipping a Colt 45. Or face Galactus and send him packing. And the proverbial cherry on top in artist David Aja, who not only understands the boundaries of sequential art, but knows how to change them. It’s not only a great story; it’s a great comic book story, and one that could only be told in a manner that only this awesome medium allows. It’s fun, it tells the story of an extraordinary hero, and it makes full use of the potential comics can have. I’d say if only all comics could be like this, but I’d be thrilled if only a few were half this good.

So what could possibly be better than Hawkeye?

Then, I will tell you: 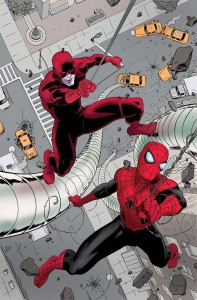 1. Daredevil (Waid / Samnee)
Probably the only comic that is better than Hawkeye. I never thought I’d see the day where the character of Daredevil makes any Top Five list of mine not once, but twice. But that’s the power great writers and artists have. Writers like BMB, Ed Brubaker, and Andy Diggle tortured Daredevil for years and told some great stories doing it. But Mark Waid realizes that you don’t have to go all grim and gritty to tell good stories, so he’s proudly brought the character from the depths of Hell’s Kitchen back to its skies and rooftops. Although he takes him briefly underground to fight villains like the Mole Man. That’s right, The Mole Man. If you never thought there was a reason for Daredevil to face this villain outside of a contrived idea like the dreadful Acts of Vengeance storyline from decades ago, Waid provides a good reason for the two to face off. Artist Chris Samnee, as well as predecessors Marcos Martin and Paolo Rivera, keeps things light; no overuse of shadows here, matching the more free-spirited feel that Waid has brought to the title. Of all the comics out there, Daredevil is the best among the very few that are consistently good and consistently fun.

There are so many more. Greg Rucka’s Punisher / Punisher War Zone is arguably the best take ever on that character. Rick Remender’s Uncanny Avengers is not only great but bringing the X-Men back into the main fabric of the Marvel Universe. And Fraction and artist Mike Allred are making FF incredibly entertaining. In a couple of weeks, I’ll talk about the best from DC, but in the meantime, feel free to comment about some of these, or your own favorites!