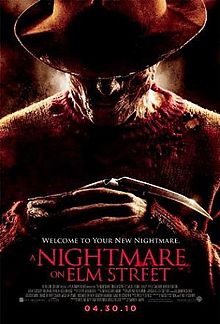 WARNING: This article contains spoilers if it’s possible to spoil a movie that came out in 2010.

I’m going to level with you from the start, folks. If you want me to roll my eyes at a movie, tell me it’s a remake. In my opinion, there’s a “Big 4” when it comes to slasher flicks. Leatherface from the Texas Chainsaw Massacre franchise, Freddy Krueger from the A Nightmare on Elm Street franchise, Jason Voorhees from the Friday the 13th franchise and Michael Myers from the Halloween franchise. All of these franchises have been “remade” in the past decade. I actually enjoyed one of them. This wasn’t it.

I had heard nothing but terrible things about this film, and having liked only 1 of the 3 remakes previously mentioned, I decided to pass when this came out. In fact, I decided to pass until it was almost 3 years old. What changed my mind was a friend whose opinion I value telling me, “It’s not that bad”. To be quite honest, of all the remakes this movie had the best shot at entertaining me. I don’t have a ton of sentiment or nostalgia for the original run of Nightmare movies, so this didn’t have a very high bar to clear. That being said, I gave this the old college try. I popped some popcorn, turned out the lights and watched it from my room while sitting on my bed. Why the bed? That’s where people sleep and have nightmares!

Let’s get all the ugliness out of the way, shall we? I hate CGI in horror movies. You can make fake blood. You can make a prosthetic. You don’t have to rely on computers to pull things off. Don’t do it. Especially don’t do it when someone did it 26 years earlier and did it better using PRACTICAL EFFECTS. If that seems like I’m talking about something specific, it’s probably because I am. The iconic scene when Freddy comes out of the wall while one of his victims is sleeping. In the original movie, they built a latex wall and actually had Robert Englund press against it. It looked absolutely freaking terrifying. They went the CGI route for this one and it looked laughably bad. I audibly groaned when I saw it. Another cringe worthy happening was Freddy’s voice. I’m not talking about the acting; I’m talking about the level. A lot of his lines sounded like they were added in post and not balanced with the rest of the audio. I don’t know if this was done on purpose for dramatic effect or if it was a blunder, but it was distracting. The last bit of negativity comes from the script. For some odd reason this movie leads you down a path to make you believe Freddy may have been innocent, and murdered for no reason only to debunk that later. Going into this film and up until the implied innocence, you think this guy is a dirt bag. The whole “he’s a monster, but maybe he was innocent, wait…he really is a monster” bit just seemed like wasted effort and didn’t add anything to the story.

That being said, there were some good aspects of this film. Jackie Earle Haley gave me the creeps. He did the best he could with the circumstances he was in. I wasn’t a huge fan of his Freddy, but that’s more of a testament to Robert Englund than a shot at Haley. It would be like them recasting Han Solo. Harrison Ford owns that role and there’s nothing anyone can do about it. Other than a couple moments where things looked painfully bad due to poor CGI, the movie looked great. The set design was awesome and the quick set changes were great. My eyes liked what they saw for the most part and that shouldn’t be ignored. I’m sure there were a ton of people that worked hard on making it look good and they will never get the praise they deserve for it. The overall story wasn’t bad, it just had some pretty bad moments and sometimes it’s hard to keep that in mind.

When it was all said and done, this movie wasn’t terrible. It really wasn’t. I just can’t sit here and tell you that it was good, either. If you want to see a great Nightmare on Elm Street movie, watch the original or New Nightmare. I will give those films two thumbs up every day of the week. This one, however, can be missed.

A Nightmare on Elm Street (2010) (R) is available for purchase or rental, both on DVD or digitally.