Welcome back for another Retro Review!  This week I’ve brought to light the first book, in the second series, of Marvel Comics’ comic book Marvel Feature # 1, cover dated November 1975.  This issue presents the first color Red Sonja solo feature!  Roy Thomas had first brought Marvel readers Red Sonja in the pages of Conan # 23 & 24, that he wrote and was drawn by the incomparable, Barry Smith.  Then she appeared in the black and white Marvel magazine The Savage Sword of Conan, all before arriving in this issue of Marvel Feature!

For the record, her origin wasn’t told until the story; “The Day of the Sword”, in Kull and the Barbarians # 3, another black and white magazine from Marvel.  This story was written by Roy Thomas, scripted by Doug Moench and drawn by artist, Howard Chaykin.  And of course, the character of Red Sonja was loosely based on the Robert E. Howard  character, Red Sonya of Rogatino, from his 1934 Conan short story “The Shadow of the Vulture”. 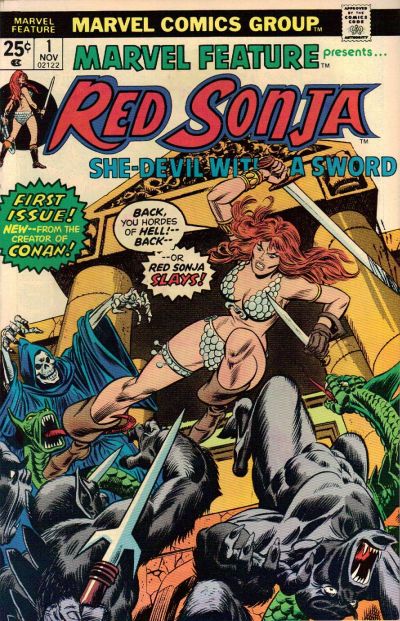 As you can see above, the initial cover was done by Gil Kane with inks provided by John Romita Sr.  The comic contains two stories, the first only eight pages, entitled; “The Temple of Abomination!” and it was written by Roy Thomas and pencilled by Dick Giordano, who also inked the figures and the backgrounds were inked by Terry Austin.  The story follows Red Sonja, as she travels through the Darkwood, where she comes across an abandoned temple!

As she explores the temple she is set upon by a figure, with the shape of a man, but with horns and animal like legs, which ends with hooves!  She is forced to kill it before she is killed.  As she continues to explore the temple she sets off a deadfall trap, but saves herself with another use for her sword!  She finds a captive, a former Priest of Mitra, but he is close to death, she is forced to put him out of his misery.  It is then that she is attacked by a host of satyrs (man-goats)!  She defeats them, destroying the “pipes of pan” in the process and makes her escape, after first burying the priest.

The second story, is a reprint, but in color, from The Savage Sword of Conan # 1, Simply entitled; “Red Sonja”, written by Roy Thomas and featuring beautiful artwork by penciller, Esteban Maroto, a Spanish artist, with inks provided by Ernie Chan and Neal Adams! It is well worth reprinting, even so soon (only a year later) and it sports some of the prettiest art ever to grace a comic book!  The combination of Maroto and Adams is a art lovers dream.  No lie!  Here take a look: 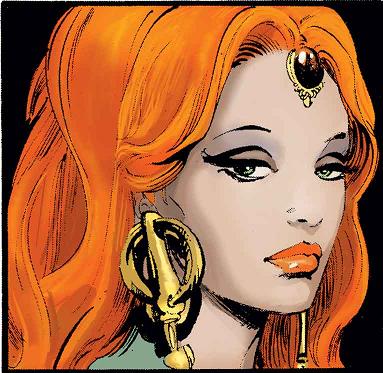 In this story Red Sonja is sent by King Ghannif to recover a lost tiara, which refers to the Conan storyline in Conan # 23 & 24, which is shown in flashback.  As we know form that comic, she does indeed recover the tiara, with the help of Conan, who she leaves in the lurch, so that she can bring the tiara to King Ghannif and claim her reward!  Only the promised reward is not what she expects!  The King plans to reward her by adding her to his harem!

And this “She-devil with a sword” has no plans to go along with the King’s ideas!  She is seized and prepared for the King’s royal bedchambers.  Only once there the King is the one who is surprised!  At the end Sonja once again rides off into the Darkwood alone!

Red Sonja’s feature lasted for seven issues in Marvel Feature.  The biggest change was that in issue two the artist most associated with Red Sonja assumed the artistic reins and that man was Frank Thorne, doing his first art for Marvel!  Here’s a look at his cover for the new Red Sonja series: 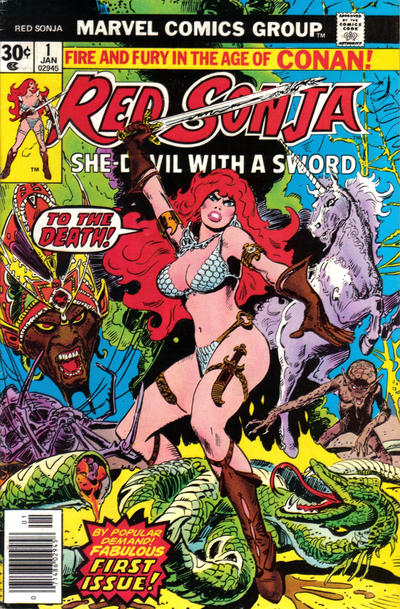 And as a bonus a promotional button from Marvel from 1976:

Frank Thorne really became well known drawing the Red Sonja comic book.  He even attended Comic Book conventions and performed a bit of a show, with himself as a wizard and early cosplay women, dressed as Red Sonja.  The most famous may have been comic book artist, Wendy Pini, who went on to create and draw Elfquest.  I’m sorry to say I never got the chance to see one of his performances!