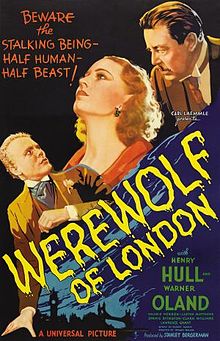 Most people (at least people my age and older) know the iconic image of Lon Chaney, Jr. as the Wolf Man. He’s one of the classic monsters from the Universal Monsters stable along with Frankenstein’s Monster, the Monster’s Bride, Dracula, The Invisible Man, the Mummy and the Creature from the Black Lagoon. Most people, however, aren’t familiar with Henry Hull. Henry Hull was the lead in Universal’s first werewolf film, Werewolf of London.

Werewolf of London was released in 1935 and bombed in theatres. People felt it was too much like Dr. Jekyll and Mr. Hyde which Universal released only a few years earlier in 1931. I can definitely see where people get that seeing as how the werewolf keeps a lot of his human tendencies. A quick Google image search will bring up pictures of Henry Hull as a werewolf wearing a hat, coat and scarf. He’s a domesticated werewolf! Many classic movie fans feel the movie took too much criticism when it was released and still consider it a classic, for good reason. It’s really a solid film that had a lot of great elements, especially for the time.

I’m a huge fan of the werewolf design in this movie. As a whole I like The Wolf Man better than Werewolf of London, but the werewolf looks so much better to me in this movie. The first transformation I thought was very well done in this film, as well. Movies were still a relatively new media at the time and they had the bare bones of practical effects and make-up. I’m a huge fan of practical effects and I always enjoy seeing effects get pulled off in a clever way.

The story itself isn’t ground breaking and nothing unexpected happens. It’s just a good, fun movie that you can pop in and enjoy from time to time. I’m a huge fan of the Universal Monster movies and this is actually one of the movies it took me the longest to see. That being said, this movie already had a high bar set by all of the other classics. I was pleasantly surprised that I enjoyed it as much as I did. Anyone who hasn’t seen Werewolf of London or any other Universal Monster film should check them out if you’re a fan of the fantastic and bizarre. You won’t be scared but I’m willing to bet you’ll be entertained.

Werewolf of London (NR) is available to stream or buy on DVD.