I WILL TELL YOU #72: Ramblings About Comics Buyer’s Guide and Stuff

I Will Tell You #72:
Ramblings About Comics Buyer’s Guide and Stuff

If you’re young enough to proficiently navigate your way to this page on a smartphone, then you might be a little too young to remember The Big Three in comics. I’m obviously not talking about Superman, Batman, and Wonder Woman. Or Thor, Iron Man, and Captain America. Or even Marvel, DC, and Everyone Else.

The Big Three in comics I’m talking about are three publications that, at their peak, were all must-reads for comic buffs in the pre-internet age. Before Twitter and Facebook, and publisher websites, and message boards, fans who wanted the latest news about the comic industry, from upcoming comic releases to creator interviews to fan discussion, turned to The Comics Journal, Comics Buyer’s Guide, and / or Wizard magazine.

The serious-minded Comics Journal became the go-to source for fans looking for news and in-depth discussion on comics beyond the mainstream. The flashy Wizard was the exact opposite, catering to fans wanting to know more about the latest hot comics from the big publishers. Both served these opposite ends of fandom spectrum for decades, and served them well. 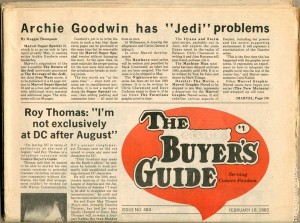 In between, though, was Comics Buyer’s Guide. CBG was the perfect middle ground for serious comic fans who felt the Journal to be a little too pretentious and Wizard a little too hollow. And being the only weekly publication of its kind during this time, CBG was the go-to place for fans hungry for the latest comic news and reviews.

Like when Frank Miller’s The Dark Knight Returns #1 blew out of stores in 1986, CBG was what told worried fans that a second printing would quickly be available. When Alan Moore announced he would be stepping away from Swamp Thing after a groundbreaking run, most saw the news in CBG first. And the magazine often broke news that happened outside the confines of comic books; such as when Revolutionary Comics founder Todd Loren was found murdered in his San Diego apartment, a lot of readers found out about this horrific story from CBG before they heard it elsewhere.

But with the onset of the internet and the digital revolution, it allowed this kind of news to get to the people looking for it a lot quicker than a magazine, of any publishing frequency, could ever hope to. And usually for free. So as sites like Newsarama and Comic Book Resources took hold, the grip of traditional print magazines started to weaken.

To the point where The Comics Journal ceased print in 2009, moving to a semi-annual online format on the publisher’s website. Wizard followed the Journal into print oblivion two years later, and maintained an online version of its magazine for a time before it, too, ceased. But the last mag standing from the heyday of comics journalism; the last print mag, that is; was Comics Buyer’s Guide. 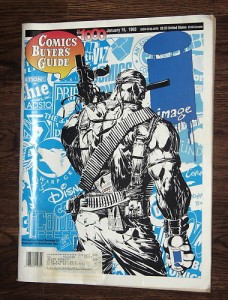 Comics Buyer’s Guide #1000, 1993. Not many publications reach this milestone.

It was the same cause of death as its competitors; declining circulation, declining advertising revenue, and in general, a declining interest due to competition from the internet. Only unlike its competitors, there will be no successive web presence to soothe the pain.

It should have come as no surprise, really; but then, the end always nevertheless does, even though we know it’s coming. The fact that its print life outlasted its competitors; even outlasting mainstream news publications like Newsweek; and the fact that it had the cushion of a large parent company, gave cause for hope.

And in truth, that association probably did prolong its life, allowing for a lower circulation than would have been possible on its own. And its transformation from a weekly tabloid format into a monthly magazine in 2004, while unpopular with many of its readers, gave it a durable format and mainstream exposure that also extended its lifespan.

Founded in 1971 as The Buyer’s Guide to Comics Fandom by comics fan Alan Light, the mag was purchased by Krause Publications in 1983 and became known as Comics Buyer’s Guide, edited by Don and Maggie Thompson. The magazine gained a strong and respected presence in the industry during the 80s, and was continuously edited by the Thompsons until Don’s unexpected passing in 1994, at which time Maggie continued on as sole editor. John Jackson Miller, now best known as a comics writer and Star Wars novelist, was brought on a few years later as managing editor, along with projects editor Brent Frankenhoff. Miller eventually left to pursue writing full time, Frankenhoff was promoted to editor while Thompson became senior editor.

And then; in 2001, for those who don’t know; yours truly was brought on board as a comics reviewer, officially kicking off my career as a freelancer. In 2004, I was awarded a regular review feature entitled Obligatory Fight Scene which I co-wrote each month with John Petty, and a year later I started up my first column, Ramblings About Comics and Stuff, as one of the debut features on CBG’s then-brand new website, CBGXtra.

That decade-plus relationship with CBG is what laid the groundwork for just about every professional relationship I’ve developed in comics. I’ve forged business relationships, developed friendships, and been given opportunities that I could only dream of as a fan. Through all of this, I’ve been exposed to countless comic books and graphic novels that I never would have discovered otherwise. I’ve learned how to network in ways that decades on the day job never taught me. And I’ve been given a look behind the scenes of this wonderful industry of comic books that has only strengthened my love of this awesome medium. 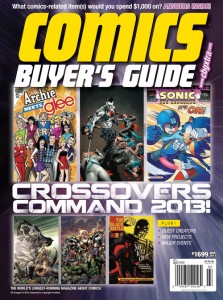 It’s not an exaggeration to say that CBG changed my life. I truthfully cannot imagine what my life would have been without it. Not just in the way I interact with comics, but with the people who make them; many of these creators have become some of my best friends and I can say without a doubt that my life would have been all the worse for not knowing them. So much fun was it hanging out with these folks at a con, it would be all too easy to forget that I was actually working. Or supposed to be, anyway.

And so, I mourn the loss of Comics Buyer’s Guide, not only as a subscriber; not only as a contributor; but also as a forever-grateful fan-turned-into-a-sorta-industry-guy. It truly is the end of an era, and I consider it nothing but the highest honor to have been allowed to be a part of this respected institution for the last quarter or so of its existence, and to be there for its passing. I am already missing it.

Thank you, New York Times best selling author John Jackson Miller, for the opportunity. Thank you, Editorus Supremus Brent Frankenhoff, for letting me keep it and not kicking me in the pants every time I missed a deadline. And thank you, CBG Matriarch Maggie Thompson, for making it all possible in the first place.

Gotta go. There’s something in my eye, and I’ve got that last issue of CBG still to read.