Chopping Mall is a Bargain Bin of Entertainment 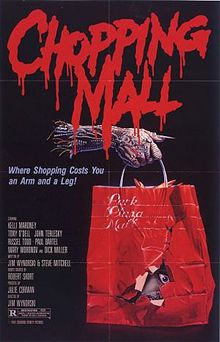 Chopping Mall is a sci-fi/horror/comedy from 1986, originally titled Killbots. It was directed by Jim Wynorski, produced by Julie Corman and written by the duo of Wynorski and Steve Mitchell.

A Ridiculous Premise and a Great Time

Yes. That’s what you need to say if anyone ever asks you if you want to watch Chopping Mall. Chopping Mall definitely falls into the “good bad” category. I picked this up on an 8 movie collection for $7.99 at Best Buy and it was well worth it. This is pure 80’s camp and I wouldn’t change a thing about it. The premise is that a mall is using a new type of security system after hours which involves 3 high-tech robots. During the demo of what these well armed robot sentries can do the question of safety comes up from the shop owners. They are told that the robots are programmed to detain and not use lethal force. The shop owners also ask what would happen to those who work late. They are told they will be issued ID badges and as long as they show them to the robots they won’t be detained. With a smile on his face the man running the presentation assures them that absolutely nothing can go wrong. Riiiiight. As the story unfolds, you find out that a group of youths that work at various places in the mall decide to have an after hours party in one of the stores. I know this will come as a surprise, but things don’t go according to plan.

Dick Miller For the Win!

None of the characters are particularly likeable, so there is no real suspense when they are put in danger. It’s one of those films where you can just it back and let the carnage unfold. There was one character that I didn’t like, however. The moment I saw the character of Mike Brennan I couldn’t wait to see him bite it. The effects, action and acting aren’t the best you’ll ever see, but then again you are watching a movie called Chopping Mall.

Chopping Mall should be taken for what it is, pure 80’s camp, and it has Dick Miller in it! If you go into it with that in mind you’ll have a blast. I highly recommend watching it with a friend or two. I guarantee you’ll think of some good jokes while watching it and nothing is worse than a wasted joke.