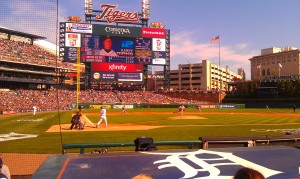 Two weeks ago, as you’ll recall, I wrote a piece on what was so wonderful about the onset of spring. If you don’t recall and don’t believe me, or do recall and want to relive the wonderment of it all, you can find said piece here. One of those elements that I sang the praises of is one that I and many others have looked forward to since last fall, and that is the return of Major League Baseball, with the current season finally getting under way last week.

Having grown up in suburban Detroit, I will tell you it should come as no surprise that I am first and foremost a Detroit Tigers fan, and have been since I was a kid, probably around 7 or 8 years old, which predates my becoming a comics fan by several years. But once I did discover comics, many of my favorite childhood memories will always be reading comics on a muggy summer night while listening to Tigers baseball on the radio. The nostalgic sound of legendary broadcasters Ernie Harwell and Paul Carey in the background is my soundtrack to many a comic book adventure as a kid. 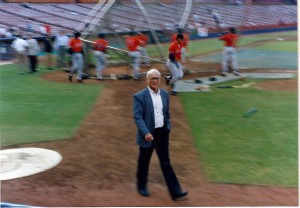 Ernie Harwell in Anaheim, circa 1992

Comics and baseball have long been connected in my pop culture world. An annual tradition for my dad and me began back in 1981 when I started attending the old Chicago Comicon; Dad and I would make the drive to the Windy City and once there, while I was busy blowing what little money I had at the con, Dad would venture out to see either the Cubs or White Sox, depending on which team was in town that weekend. While I had plenty of fun at those shows and have no shortage of great memories of scoring some treasured comics and meeting some of my favorite creators, I often wished that I had gone with Dad to some of those games. Although if I had, I probably would have forever regretted missing a day of the con. Such is my way. 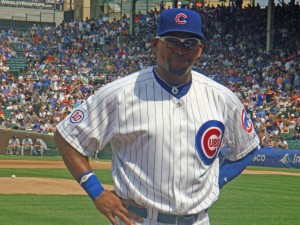 Although Dad and I stopped making those trips together after a few years, I’ve been making the trip to Chicago for one con or another every single year since. And three years ago, with the first Chicago Comic and Entertainment Expo (C2E2), I finally made good on that wish of attending a baseball game. With thirty years of convention going to my name by that point, I realized that I wasn’t going to miss anything at that con that I hadn’t experienced several times already, so I ditched the show for a day and took the L (or is it El? I’m still not sure after all these years) to the north side to see the Chicago Cubs play at Wrigley Field.

Buying back issues? Chitchatting with comics pros? Sitting in panels? Been there, done that. But watching a ballgame at a literal historical landmark? Well, I had not been there nor done that, at least in a very long time. And I had every bit as much fun doing it. 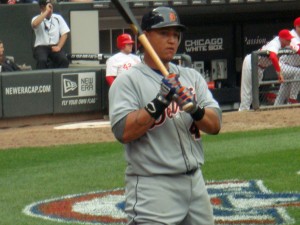 Triple Crown winner Miguel Cabrera, when the Tigers played at US Cellular Field during C2E2.

So much fun, in fact, that I’ve since added an additional trip to Chi-Town every summer, exclusively to watch the Cubbies for a game or three. That’s right; I called them the Cubbies, for over the past few years I’ve also become a fan of the team many see as baseball’s most loveable losers. I’m not sure how that happened, but hey; you don’t always intend to get into a relationship with someone you meet, but sometimes it just happens.

Last year at C2E2 it was even better, in fact, as not only were the Cubs in town the day I arrived for the con, but the White Sox were also there that weekend. And in some kind of cosmic coincidence; the Detroit Tigers were the White Sox’ opponent for that series. So I had no qualms whatsoever about playing hooky from the con again for a day; and what a day it was. The Tigers won, and I took great pleasure in gloating from my seat at US Cellular Field, and from another seat in a nearby tavern afterwards. 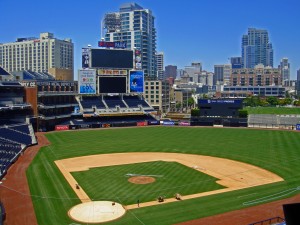 So last year’s C2E2 was bookended by two major league baseball games in two different ballparks. Note to Chicago residents, and New York residents, for that matter: two teams in one city. You don’t know how good you have it.

Of course, the comics / baseball connection isn’t limited to Chicago. The city of San Diego also has a comic con that some of you might have heard of. They also have a baseball team you might have heard of. However, the connection is far more limited, as I learned a few years ago that Major League Baseball tries to avoid scheduling any Padres games at PetCo Park during San Diego Comic-Con, per the city’s request. With 125,000 or so Comic-Con attendees already pushing the capacity of the city’s hotels and parking beyond its max, the last thing it needs is another 40K fans coming downtown for a baseball game, in a venue that’s literally located next door to the convention center. 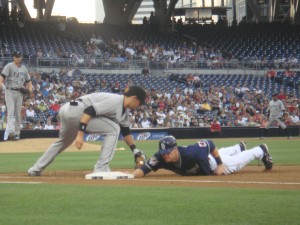 The San Diego Padres played the Florida Marlins, a few days before Comic-Con in 2009.

But, if you get into town a few days earlier, as I historically have done, you might get lucky as I did in 2009, and catch the Padres at the tail end of a home stand, before they hightail it out of there. And this turned out great, for unlike a show like C2E2, SDCC is so packed with events and other things to do and see that it’s pretty tough to sneak away for an entire day. So that Padres game a couple of days before Comic-Con that year was a nice, restful calm before the proverbial pop culture storm.

So comic conventions have often afforded me the luxury of partaking in not one, but two of my favorite pastimes, at least when I’ve decided to take advantage of it. And spring time is a time where I often start thinking of both. So with the onset of spring, the boys of summer are back; the Tigers still hunger for the pennant that eluded them last year, and have the pieces all in place to get it.

The Cubbies by this time might already be looking to next year, but hey, I’m still gonna watch ‘em anyway.