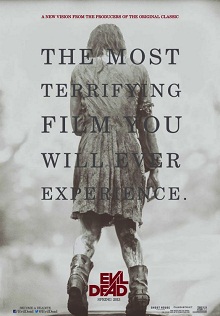 “Hey, Mike. They’re remaking Evil Dead.” Boy, you should have seen the look on my face when I heard that. I went into immediate purist fanboy mode. “It’s gonna suck! Why would they do this!? They’re going to crap all over a classic and tarnish the reputation of the series!” I just knew this movie was going to suck. Sam Raimi and Bruce Campbell (the gentlemen that brought us the first Evil Dead, Evil Dead 2 and Army of Darkness) would be disappointed and I’d have to hear people talk about this abomination. Then I heard that Sam and Bruce were producing it. “Oh. Well…the Ash character is going to suck because no one can play that role after Bruce Campbell. I can’t believe they’d sign off on that.” Then I read there wouldn’t be an Ash character. “Oh. Really? That’s cool. Maybe this could be good.” I had run out of unwarranted anger towards this movie and had nothing else to whine about, so I just rolled with it. I gathered a group of people, bought tickets to the midnight release (and happened to be in theatre #13 which was awesome) and experienced the new Evil Dead.

The movie hit the ground running and I was all in from the moment it started. It was everything I could have wanted from an Ash-less Evil Dead movie. It made me tense, it made me cringe, it made me laugh and it made my inner horror fanboy squeal with delight. I believe this movie absolutely succeeded in what it was trying to accomplish. The story (which is based off of the original Evil Dead from 1981) was solid. It had a nice sense of familiarity without making me feel like I’ve seen this movie before, which is where most remakes fail. They had plenty of nods to the original franchise without copying it and that’s the hallmark of a great remake, which brings me to my next point. I’m going to stop calling it a remake, because it really wasn’t. This was a different movie and should be treated as such. I won’t entertain comparisons between the two because they are such different animals it wouldn’t be fair to either film to do so.

The best way to review a horror movie is to watch the audience in the theatre. It’s not fair to judge horror films based solely on how you react, but how the masses do. People were screaming, jumping and covering their faces. A few things I overheard during the movie: “Do it! Oh my God, just do it!”, “I’m freaking out, man!”, “No, no, no!” and “I’m not sleeping tonight.” This was on top of all of the screaming, jumping and cringing. It was awesome to see such strong reactions from the audience.

I really don’t have enough good things to say about the new Evil Dead. I almost never go see movies in the theatre because I always end up in a room full of talkers and cell phone users and it ruins the experience for me, but I’m glad I saw this. On top of that I plan on going at least once more because it’s rare to get a horror movie these days that actually delivers. The director, Fede Alvarez, did a great job and that shouldn’t be overlooked. I implore horror fans and any original Evil Dead franchise holdouts to see this film (and stay during the credits).