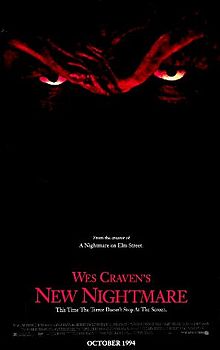 Continuing on the adventure of exploring movies starring some of this year’s guests at Motor City Nightmares, this week I’m focusing on a film starring Heather Langenkamp. Heather busted into the public eye playing the legendary role of Nancy Thompson in the Wes Craven classic, A Nightmare on Elm Street (1984). She appeared twice more in the Nightmare franchise, A Nightmare on Elm Street 3: Dream Warriors (1987) and the subject of this article, Wes Craven’s New Nightmare (1994).

With the help of huge box office outings and the extremely talented Robert Englund playing him, Freddy Krueger had become a full blown celebrity. People were in love with the character and couldn’t get enough. Before New Nightmare there had been 6 Nightmare movies in 7 years. That’s insane. The downside of being the mutilated, wise cracking serial killer and horror icon that everyone wants to see is that Freddy started to change. He went from a terrifying force to a campy killer slinging one liners. Freddy was still bringing home the bacon at the box office, but he was a shadow of his former self.

New Nightmare brought Freddy back to his visceral roots, and it’s absolutely awesome. It’s a metafilm about the Nightmare series and its effect on actress and the leading lady of the series, Heather Langenkamp. She portrays herself, married and with a young child, coping with celebrity life and a stalker. She’s brought back into the world of Nightmare due to the 10th anniversary of the original coming up. Weird stuff is happening all around her and she finds out that Wes Craven is working on a new script…which seems to be matching the weird happenings.

The best thing about New Nightmare is the fact it had the guts to do something very different. With Heather, Robert Englund, John Saxon and Wes Craven portraying themselves we get to see the core of the original Nightmare face their greatest (and worst) creation. The kills are grotesque, Freddy is vicious and the story is rock solid. Heather and company do a great job making you feel for them as people and not characters, and that was something I didn’t see coming.

Much like all long running film franchises the Nightmare series has its highs and lows. New Nightmare is definitely a high, second only to the original for me. It’s something that we haven’t seen from any other of the big horror franchises and we probably won’t see again. Being the lowest grossing film in the series, outsiders will always think it’s the black sheep of the family. New Nightmare isn’t the black sheep…it’s the buried treasure.