The 24th springtime Motor City Comic Con is currently taking place at the Suburban Collection Showplace in Novi, MI this weekend, May 17-19.

This year’s show saw the usual mix of media celebrities including familiar names such as The Incredible Hulk’s Lou Ferrigno and Star Trek’s Walter Koenig, but also newer faces such as The Walking Dead’s Norman Reedus. Former Walking Dead co-star Jon Bernthal was also scheduled but canceled days before the show opened. 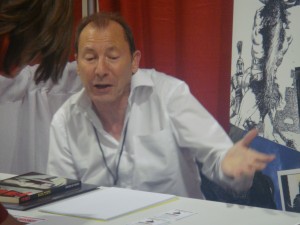 David Lloyd had a busy Friday at MCCC.

The show continued to see an expansion of comic guests, a trend continuing from last year, including veteran artist Mark McKenna, making his first-ever MCCC appearance. Fellow artist Tom Raney made his first show appearance in over a decade, and artist Jim Calafiore set up for his second consecutive year. They were joined by past industry regulars such as Billy Tucci, Brian Pulido, and Mark Sparacio.

Most notably, comics legend Stan Lee is the show’s special guest, appearing at the show on Saturday only, but also appeared Friday night at a special party at the nearby Crowne Plaza Hotel held for VIP ticket holders. 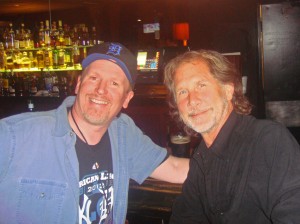 Parker Stevenson was cool enough to take some time and talk about his first MCCC.

Convention organizer Michael Goldman reported that the show’s ticket pre-sales had shattered past years’ ticket sales, and were roughly quadruple of the show’s prior year. While this couldn’t be independently confirmed, lengthy lines of attendees waiting to enter the show on its opening day Friday, were estimated to be a few hundred in number, many more than on the show’s first day last year, bearing out claims of much higher advance sales.

The number of exhibitors also increased, with an additional row of retailers added to the show’s floor plan this year. Creators set up in Artists’ Alley in the rear half of the convention floor reported mixed results on sales of prints and original art; while artists like McKenna and Calafiore reported strong sales on the show’s traditionally weak opening day, other artists further back did not report the same good fortune. Along the rear wall of the exhibit hall, however, artists like Tucci, George Pérez, and David Lloyd had consistently strong traffic. 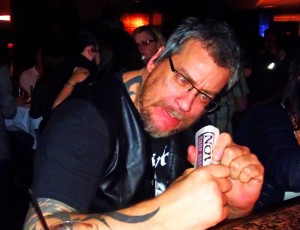 The wider aisles housing the media guests tend to make attendee traffic appear to be much less than it often is. Superman’s Margot Kidder had a small crowd around her table throughout the afternoon, but Starship Troopers’ Dina Meyer had several slow periods. First-time guest Parker Stevenson (The Hardy Boys) reported periods of both steady crowds and slowdowns, but did well, and spoke highly of the show’s organizers and the polite fans he met on the show’s opening day.

All creators and retailers asked anticipated a strong Saturday, likely to be fueled in part at least by Stan Lee’s appearance that day. More to come later.

Not long after the convention opened on Saturday, there were indications that the organizers’ claims of advance presales indeed were far more than those in the show’s previous years. And while such vast increases are definitely signs of success for this year’s show, Motor City Comic Con appeared to be victimized by its own success as much as it benefited from it. 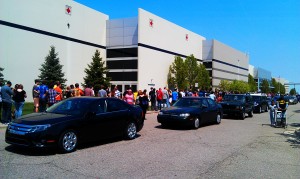 The line to enter extended around the building, as others circle the lot in search of parking.

Attendees driving to the show were faced with traffic jams that extended to all major roads surrounding the Suburban Collection Showplace and snarled traffic for miles. Upon arriving, many of these attendees discovered that the venue’s parking lot had filled up quickly and were left to scramble for parking elsewhere, filling up nearby vacant lots and parking lots of adjacent businesses. Once these unsanctioned options were filled, later arrivals were forced to park a mile or more away and walk the rest of the way to the convention center.

The challenge unfortunately didn’t end there, as those finally arriving at the convention discovered lines extending around the back of the convention center and reported wait times of two hours or more to enter. This did not apply to just those looking to purchase tickets, but also those who had purchased advance tickets believing that this would alleviate any kind of extended wait times.

And once inside, the massive crowds congested most aisles and making several of them nearly impassable. Lines for restrooms, concessions, and the lobby ATM resulted in reported wait times of over a half hour, with some concession stands running out of basics such as soda pop and pretzels with many frustrated patrons only discovering this when they reached the front of the line. 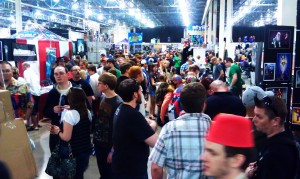 Record crowds jammed nearly every aisle of the exhibit hall.

According to organizer Michael Goldman, the overcrowding was largely attributed to the draw of The Walking Dead actor Norman Reedus and Marvel Comics legend Stan Lee, whose lines each numbered several hundred attendees at any given time during the day. Goldman stated that he expected this problem to be alleviated next year, when the show expands to additional halls within the exhibit center.

Of course, this was of no benefit to current ticketholders already inconvenienced by the overcrowding problem. Twitter was abuzz with complaints of exasperated fans standing in seemingly endless lines outside with no shade or water, those who had to endure additional lines once inside for autographs, and fans who simply gave up on the congested traffic and turned around to head back home. Local media also caught on to the problem and reported it on their websites.

The convention did stay open nearly an additional hour to accommodate fans caught up in the long lines. Both Reedus and Lee reportedly stayed beyond their appointed signing times to ensure that every fan who had waited got the autograph or picture they had paid for. And some Artists’ Alley exhibitors reported further sales from the extension of the show’s hours. These exhibitors largely reported strong sales for the day, indicating that whatever frustrations endured did not deter fans from spending their money.

Such extreme travel and crowding conditions are not expected for the show’s final day on Sunday, due to the traditionally smaller crowds on the final day as well as Lee only appearing on Saturday. Amidst criticisms of poor organization and deliberate overselling, show organizers scrambled to make good on their commitment to the day’s paid attendees and were doing their best to ensure that there would not be a recurrence the following day. 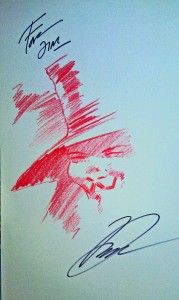 Much to the relief of fans returning to Motor City Comic Con the day after record crowds, lengthy lines, and traffic jams for miles around Suburban Collection Showplace, there were no such problems on the shows final day. Show organizers, too, undoubtedly, breathed a sigh of relief, as fans driving in were able to readily enter the parking lot and get in line to purchase tickets or enter the show if they already had them. While there was a line outside the convention center to purchase tickets, its length was not unlike those typically seen in past years. 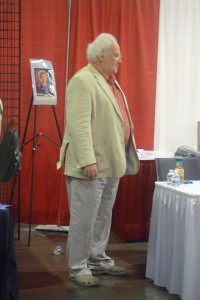 Colin Baker stretches his legs during a slow period on Sunday.

Retailers and Artists’ Alley exhibitors reported the typical mixed reviews for the show’s final day; many retailers benefitted from deeper discounts on comics and trade paperbacks, and many artists reported the strong sales from the show’s previous day carrying into Sunday. Omega Paradox creator Mark Sparacio was especially pleased with his business over the entire weekend, selling prints and colored sketches. Artist David Lloyd had frequent breaks in traffic but reported strong sales of his digital effort, Aces Weekly, where he provided a free sketch to any fan making a purchase. 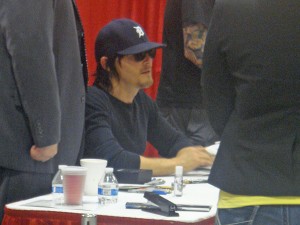 Norman Reedus was busy all day. All weekend, for that matter.

While Stan Lee’s Saturday appearance was over, actor Norman Reedus continued to draw large numbers of fans seeking pictures and autographs. Other media guests had the normal Sunday slowdowns, and many appeared to skip the day entirely.

While the show undoubtedly will report all-time record attendance, it will be done amidst criticisms of overselling and failing to anticipate the resulting large crowds. Despite the widely reported problems on Saturday, Sunday by all outward appearances went smoothly and fans asked their opinion of the show overall reported enjoying the event.

The 25th springtime Motor City Comic Con has already been scheduled for the same weekend and same venue next year, on May 16 – 18, 2014.