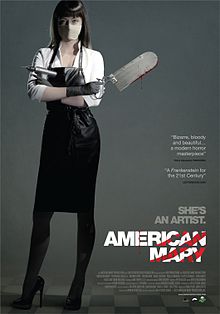 The horror genre has always produced a ridiculous amount of films each year. Every horror fan dreams of creating a horror flick. Unfortunately, they don’t always come out as winners. It’s always unfortunate when you hear some really great things about a movie because expectations begin to build. That being said, I heard some really great things about American Mary and I finally had a chance to check it out.

American Mary is a horror film from 2012 starring Katharine Isabelle (Ginger Snaps) and written and directed by the Soska Sisters (Dead Hooker in a Trunk), a.k.a. the Twisted Twins, Jen and Sylvia. This film came out to a limited release in 2012 and came out on DVD and Blu-ray in the U.K. in early 2013. In that time it had garnered a fair amount of critical acclaim, and us folks in the good ol’ United States had to wait until this past week to see it (unless you ordered the region free U.K. Blu-ray off Amazon). It just hit Video on Demand, will get a limited theatrical run and will be available to own here in the U.S. in June. So while Europe praised this film, I was stuck waiting to see this supposedly awesome movie.

The big day finally came and American Mary graced my television set. It’s about a young med student, Mary Mason, and a series of bizarre events in her life. Let’s just get right to it. This movie was fan-freaking-tastic. I enjoyed American Mary from beginning to end. I don’t have a bad thing to say about it. It looked great and the story was original. It’s rare to get that with modern horror. The characters were unique, interesting and extremely likeable. Katharine Isabelle absolutely kills it as Mary. This is a performance she should be proud of because she owned this movie. Tristan Risk who plays Beatress in the film wasn’t too far off from earning the same praise. I think the only thing preventing that was the fact that she had less screen time. If given more time she could have potentially stolen the movie.

American Mary is what the horror genre needed. Nowadays there are a lot of remakes and movies that just don’t break free of what the mainstream thinks horror is. American Mary succeeds because it’s just damn good. Given the subject matter this movie could have gone off the rails very easily, but Jen and Sylvia kept it right where it needed to be. In horror it’s not uncommon to see stuff happen that screams “we did this just because we could”. In American Mary, everything is done for a reason.

American Mary is a unique and refreshing film in the genre that will hopefully be remembered by many as a film that succeeded on all levels. I can’t wait to own this because I see myself revisiting this one many times. If you get the chance check this movie out. It lived up to the hype and it’s a must see for any horror fan, especially those looking for something fresh.