Bonjour, mes amies!  or in good ol’ English, Hello, my friends!  Why the French greeting, you ask?  Well, why not, I answer!  This week I’ve ventured into the D C Comics section of my huge back issue collection and uncovered The Brave and the Bold # 93, cover dated January 1971.

The book features an interesting team-up, if there ever was one, teaming up The Batman with The House of Mystery!  Huh, how’s that suppose to work?  Well, that’s a valid question and one I’ll answer by saying; quite well!  Take a look at the nice cover drawn by that fabulous Neal Adams guy! 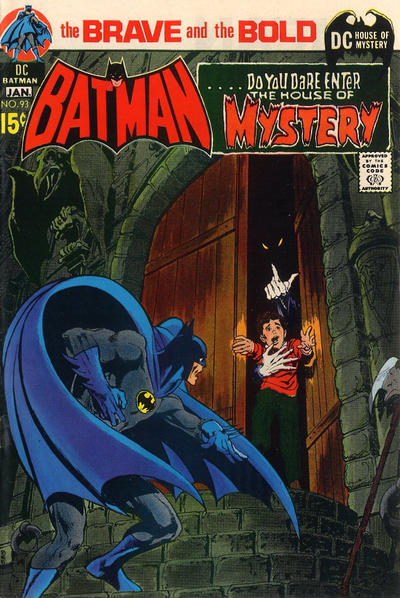 The cover features a child being pulled into a creepy castle with The Batman looking on from the steps!  The glowing eyes are a very nice touch, as is the beckoning hand/finger, also the leaning axe to the right of the door and the stone gargoyle to the left.  All in all, pretty creepy, or maybe that’s eerie?  Oops those names below to Warren Publishing Company, so forgot I mentioned them!  (Wink, Wink).

The story is entitled; “Red Water, Crimson Death” and it is written by Denny O’Neil and both pencils and inks are provided by the aforementioned Neal Adams.  Murray Boltinoff is the editor of the story and the comic book!

The story features The Batman and The House of Mystery, as I mentioned previously.  So we quickly find ourselves confronted by Cain, the host of The House of Mystery comic book.  He doesn’t allow a crook into his house, where he has sought asylum, and moments later, the crook is confronted by Batman.  The Batman stumbles as he rushes up the steps of the house’s porch and the crook has Batman in his sights!  But his gun misfires and Batman captures the fleeing criminal and turns him over to Commissioner Gordon.

Gordon and Batman talk and Gordon convinces the Batman that he needs a vacation, as he has been pushing himself too hard for too long!  And Jim Gordon, just so happens to have a steamship ticket to Ireland, that he gives to Batman and insists he takes a vacation and surprisingly Batman agrees to take the vacation!

The scene shifts to the ship sailing across the Atlantic ocean, where Batman is travelling as Bruce Wayne.  Cain continues to narate the story, as he does in the House of Mystery comic, and his ghostly form follows Batman/Bruce Wayne around.  Bruce meets a young boy named Sean.  Shortly thereafter, Sean is swept overboard during a storm and Bruce dives into the dangerous waters and rescues the boy.  The ship stops short of Ireland, to let the boy off at an island, where he lives.  On a whim, Bruce also departs the ship, hoping for a restful visit on the sparsely populated island off the coast of Ireland!

Bruce is awakened by something and looks out the window, only to spy the boy leaving the village and making his way across the moors to a distant castle!  He encounters other townspeople, who tells him of the “Crimson Death” and the recent deaths on their island.  Bruce, as Batman, follows Sean and makes it into the castle as the gates close behind him.

It’s here where Denny chooses to explain how the “team-up” of Batman and the House of Mystery is possible.  That explanation is found on page fifteen (15) of the story, in panel two  and three.  Take a look, here’s panel two: 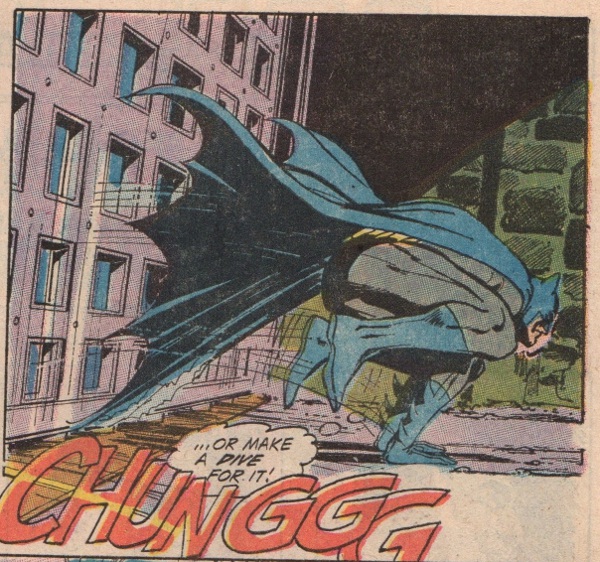 As you can see, The Batman has barely succeeded in making it into the castle before the gates slam shut upon him.  Now here’s panel number three, with Dennis O’Neil’s clever explanation:

Batman is unsure where Sean has gone and doesn’t want to traverse an open courtyard, when unexpectedly he feels a tap upon his shoulder, only to find no one there, but now he sees a trap door leading to a secret passageway into the castle.  He takes on two thugs and finds out the boy, Sean, has been captured and they plan to poison the boy and use his death to further scare off the people living on the island, so that they can gain outright the fishing rights worth millions of dollars!

Batman saves Sean again, but the poison has reached his own bloodstream through a cut on his arm.  Aloysius Cabot, the boss explains that Batman has a fifty-fifty chance of choosing the antidote in one beaker or simple water in the other beaker set before him.  Batman must chose immediately or die.  But as his eyesight begins to fail, with cool artistic effects provided by Monsieur Adams, he sees a portrait that is pointing at a separate test tube.  He lungs for the test tube and drinks the real antidote.  Neither of the two beakers actually contained the antidote!

Before Batman completely recovers, Cabot aims a gun and takes sight on killing the Batman!  But before that can happen the portrait falls for the wall killing Cabot!  Yes, that’s right, the portrait of the dead King Hugh, who’s castle the bad guys were inhabiting, saves Batman!

The story ends with Batman carrying the boy back to town, who has just awakened remembering nothing!  Batman is left thinking that they will never know why the boy wandered off to the castle, or why he even went up to the deck of the ship during the storm.  Clearly it’s a mystery that he will never solve!

The last panel reveals Cain once again having the last word and that’s that King Hugh is gone, but he obviously couldn’t stand having someone disturbing his rest!

A pretty good story for a rather unusual team-up!  I definitely give it high marks and recommend that you consider adding it to your collection, if you get the chance!  Til next time, be seeing you …