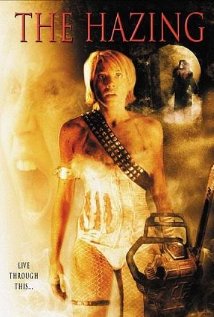 Sometimes life hands you an unexpected treat. I was browsing the horror selection on Netflix for something to watch for my weekly horror movie viewing when I stumbled across The Hazing a.k.a. Dead Scared. The poster and brief description that Netflix gave me of The Hazing led me to believe this would be good for at least one or two laughs at its expense.

The Hazing is a horror/comedy that came out in 2004 and is about a group of pledges going through the initiation process of a brother/sister fraternity and sorority. Naturally, being a horror movie, things get weird. It stars a few familiar faces to horror fans. Brad Dourif (the voice of Chucky in all of the Child’s Play movies), Parry Shen (from the Hatchet series) and Tiffany Shepis (from a crazy amount of B horror movies) all have roles in this film, but the real star is Nectar Rose. She plays the stereotypical big breasted, blonde haired and ditsy girl and she owns that role. That’s a role that can very easily go from fun to irritating and a lesser actress would have ruined the character. Rose’s performance gave this movie a little something extra.

For the most part all of the actors and actresses in this movie did at least a decent job, which isn’t always the case in low budget horror movies. Most of the effects were pretty good, with only one or two coming off as painfully bad. Again, this is pretty surprising for a low budget film. Technically speaking there’s not a lot to complain about when it comes to The Hazing. The most annoying thing is probably the fact that Netflix has it listed as The Hazing, but IMDB has it listed by the new title, Dead Scared. That could potentially cause a bit of confusion.

Overall this movie was pretty entertaining. It played it pretty safe with the plot and didn’t take many risks, but it what it set out to do and did it well. My initial thought that I’d be laughing at it and not with it was wrong, as The Hazing made me laugh for all the right reasons. This isn’t a movie I’d say is a must see, but if your “to watch” list ever runs short this would be one that I don’t think you’d regret adding.