Hello again!  It’s time for another edition of Fabulous Finds!  Number eighteen (18) to be exact, and this week I’ll be writing about the Marvelmania club magazine entitled, oddly enough, Marvelmania Magazine!  But the interesting story is that there were actually two separate number one issues!  Say what?

Yep, there was a sixteen page trial run issue dated October 1969 and there was also a thirty-two page number one dated 1970, that was printed and sent out during the spring of 1970.  Both featured Jack Kirby front covers and Jim Steranko back covers, but each was entirely different.  Take a look at the front covers of each issue, first the test number one from October 1969: 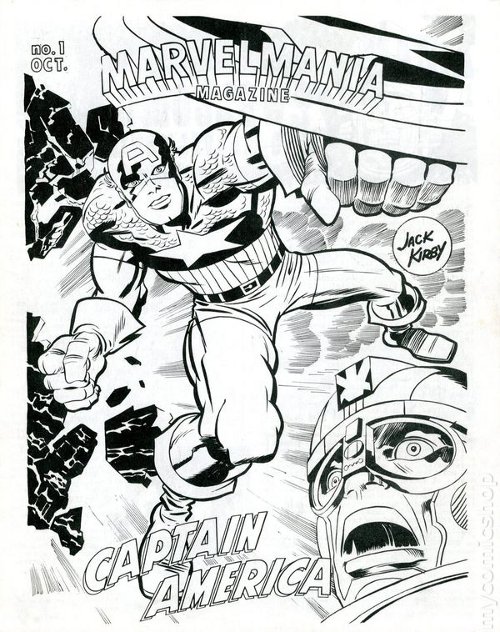 Next the more well known second number one issue from the Spring of 1970, below: 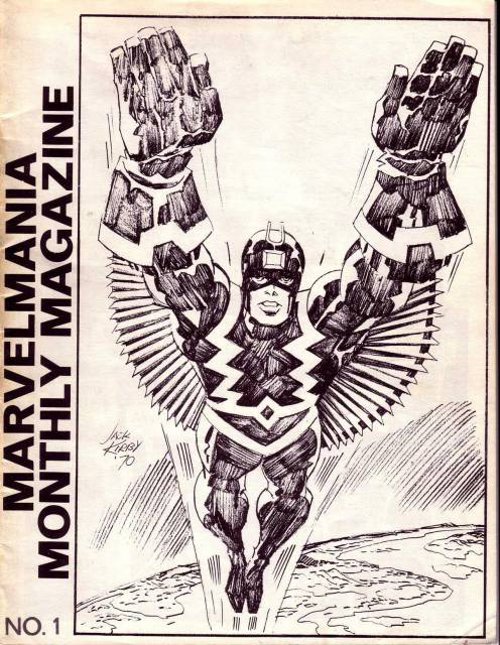 I wonder why they didn’t just go ahead and use the same artwork on both number ones?

But they didn’t!  And they went so far as to also change the artwork on the back cover of each issue, as well.  But that’s one of the reason it’s important to secure both number one issues!  Here’s the back cover to the October 1969 # 1: 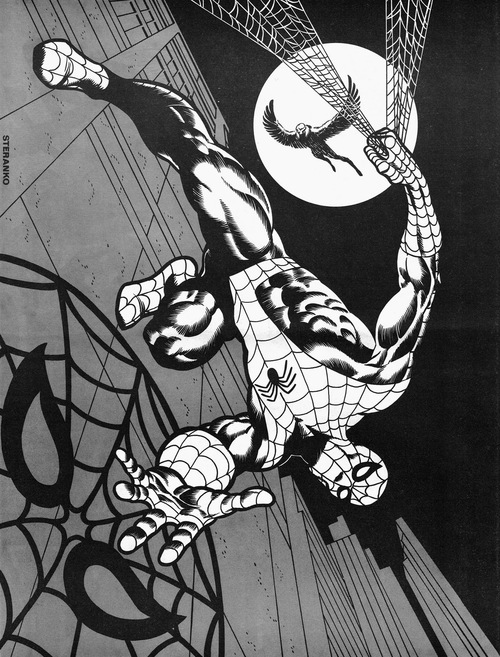 Jim Steranko’s First Back Cover from the Oct. 1969 issue

Actually the artwork wasn’t run full page, like what I’ve shown to the right.  It was printed maybe three quarter sized and on the top and along the right hand side, there were heads of some other Marvel characters, like Thor, Black Bolt, Cyclops, Hercules, the Hulk, Black Panther and Dr. Doom!  Also a full body shot of Iron Man flying towards the reader for some reason!

A pretty nice Spider-Man drawing by Mr. Steranko, but I like his Nick Fury Agent of S.H.I.E.L.D. artwork from the back cover of the second number one issue better.  So for your viewing pleasure, I also show you that: 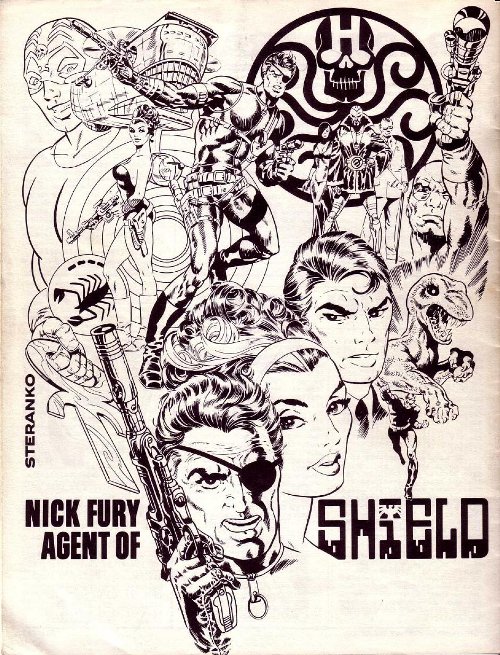 I think the back cover to the right, that ran on the second number one issue is outstanding!  But I’ll let you, the reader make up your own mind.

Which Kirby front cover do you like best?  Which Steranko back cover?

Please take a moment and leave me a comment and We’ll take a poll.

Okay the covers were different, the second first issue was twice as long as the first.  So, was there any overlap of subject manner?  Well, yes and no!  The first test issue featured a welcome page, an editorial, a letters page with three letters (neat trick, since the issue hadn’t been mailed out at that point).  A Doom’s Dispatch column and Marvel I.Q. test.  A page spotlighting Jack Kirby.  Another page of Marvelmania International club news, a two page Toys for Tots push, including the Jack Kirby poster.  In case you never saw it, I’ll run it for you.  As you can see it features; Thor, Captain America and Spider-Man! 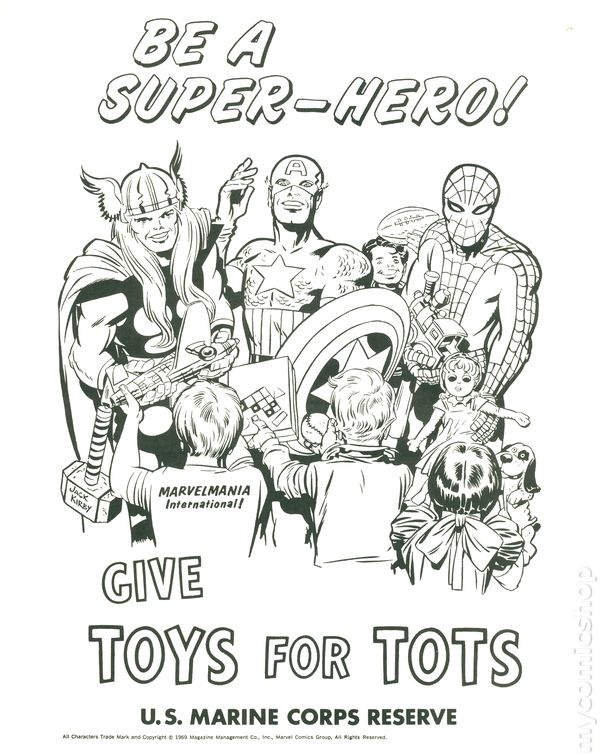 The magazine also includes a few short columns; like Marvelmanic of the Month, Tony Isabella‘s The Coming of the Avengers, part 1, Mark Evanier‘s Graphic Traffic, Bruce Schweiger‘s SERIAListic Writings, and Ed Noonchester‘s Realism in Comics!  All in all a pretty good first issue, wrapped up in sixteen pages with pretty darn good covers and with Marvel artwork sprinkled throughout the magazine!

So how did the second number one issue compare?  Well I already have shown you the different front and back covers, so what about the insides!  The book opens with The Adventures of Osgood and Zelda, a fumetti photo page, that ends with an appearance by Dr. Doom!  Then a Table of Contents page, an editorial, three and a half pages of letters ( from people that had received the test issue), then a half page Stan’s Soapbox, by none other than, Stan Lee, himself!

Then two pages of Marvemania club news, a list of people looking for pen pals, called Correspondence Corner, then the big news, it was announced the Jack Kirby was leaving Marvel Comics and moving to D C Comics, where he had accepted a job as an editor for three brand new titles!  Wow, that was a shocker for all die in the wool Marvel fanatics!

Then the magazine spent a page explaining the new Marvel Mad Money concept.  Next up was five pages on the Toys for Tots campaign, with different Jack Kirby artwork, plus lots and lot of pictures showing the Marvel characters (Thor, Captain America and Spider-Man) interacting with the U.S. Marines, as well as, Jack Kirby and lots and lots of children!

Then a full page on the Marvelmaniac of the Month,Part two of Tony Isabella’s The Coming of the Avengers (focusing on Captain America).  I wonder if people that didn’t receive the first number one wondered why this column started with Part 2, in a first issue???

The second number one issue sported a three page Doom’s Dispatch, as well as, short columns like in the first number one.  This time up there was one entitled; Marvel Revisited by Tim Russell, More on Realism in Comics, this time written by John Ostapkovich, another Graphic Traffic by Mark Evanier.

Again, it’s a darn good fan magazine and takes what was done well in the test  issue number one and expands it into thirty-two pages for the second issue number one, just a few months later.  The editor was Mark Evanier for both issues and I think he did a terrific job with both first issue!

The second first issue is easier to find and will be cheaper to add to your collection.  The first, first issue, is much tougher to find, and even though it’s half the length of the second # 1, it will run you double the cost, unless you can find a bargain out there!  And occasionally there are bargains to be found, if you’re willing to keep looking.  It took me years and years before I found my test issue number one at what I considered a price that I was willing to pay!  But I’m happy that I spent what I did to complete the collection.

Oh, and in case you were wondering, there were only six issues of Marvelmania magazine, well, I guess seven if you count both of the number ones!

That’s it for this edition of Fabulous Finds.  Be sure to come back in two weeks for the next Fabulous Finds column and be here next Friday for another in my RETRO REVIEW series!  Take care, all.