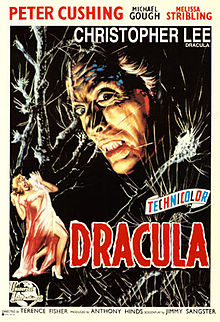 The horror movie market was primarily dominated in the 1920’s through the 1940’s by Universal. They had all of the big guns in their arsenal and the actors to portray these larger than life characters. Bela Lugosi, Boris Karloff and Lon Chaney, Jr. were names that the public couldn’t escape. Universal churned out tons of black and white classics starring these actors and they were relatively unrivaled in the horror market. That was, however, until 1957 when Hammer Films dipped their toe into the horror market with their first full length color horror movie, The Curse of Frankenstein. Though it’s not one of my favorites the success of The Curse of Frankenstein led to the production of one of my favorite Hammer films, Dracula.

Dracula (or The Horror of Dracula as it was retitled for the United States) was released in 1958 and starred the ever classy Peter Cushing as Van Helsing and Sir Christopher Lee as Count Dracula. I love the Universal horror films.  They set the standard for what the world pictures when thinking of these classic monsters. When a little kid first does a Dracula impression, they impersonate Bela Lugosi, not Christopher Lee. That being said, as much as I love the Universal version of Dracula, this is the superior film. Where the Universal Dracula is a series of great moments and memorable characters, the Hammer version of Dracula is the better story as a whole.

Hammer absolutely drew a line in the sand with this film. They not only wrote a tense, smart and action filled film, but they hired Christopher Lee and Peter Cushing to star in it. To be quite honest if someone made a movie that was just Cushing and Lee sitting on stools and making fart noises with their mouths for 90 minutes, it would still be pretty decent. Lee didn’t try to imitate Lugosi in the role of Dracula. He came out and reinvented the role and absolutely nailed it. His Dracula is far more accessible and less of a cartoon character. Lee’s Dracula is one you can be afraid of. Peter Cushing, the ultimate class act, played Van Helsing and actually rivaled Lee’s Dracula. The character of Dracula is larger than life and often overshadows damn near every other character that appears in a movie with him. Peter Cushing, armed with his understated charisma, made Van Helsing interesting and a character I could get behind and legitimately root for.

This is one of those films that genuinely deserves the praise it gets from horror fans. Anyone that knows me can vouch for my undying love of the Universal horror films. It was painful to admit that the Hammer Dracula was better than the Universal one, but I believe it to be a true statement. Any fan of classic horror that hasn’t seen this movie needs to get their hands on a copy and enjoy it. I can almost guarantee you won’t be disappointed.