Welcome back to another edition of Greg Turner‘s RETRO REVIEW!  This week it’s time to turn our attention to a non D C or Marvel comic book, and as summer in Michigan has arrived, I decided to dig out Comico‘s Gumby’s Summer Fun Special, dated July 1987.

It’s a really fun book and if you don’t already own this comic, I high suggest that you search it out and add it to your collection.  If you are already familiar with Art Clokey‘s lovable character, Gumby, you’ll know what I’m talking about.  And if you’re unfamiliar with Gumby and his pal, Pokey, you owe it to yourselves to find out, and this comic is a wonderful place to start!

As an aside, do you remember Garrett Morris‘ Gumby from television’s Saturday Night Live?

This summer special, and no, there was no regular series, just this summer special and a winter special to follow later, features a terrific wraparound cover by the artistic Arthur Adams!  And here it is, for your viewing pleasure, take a peek: 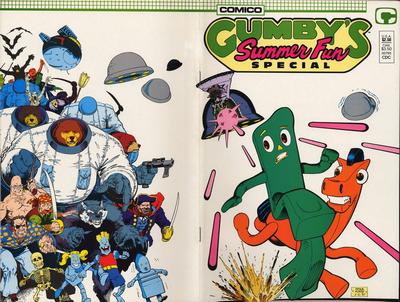 As you can see it features our heroes, Gumby and his pal, Pokey, running from all sorts of trouble, aliens in space ships, bears, pirates, robots, monsters and a rather large werewolf!  I don’t know about you, but it really makes me want to pick up that comic and see what it’s all about!  And of course, it’s drawn by Arthur Adams!

The comic is written by Bob Burden, of Flaming Carrot fame and the interior artwork, both pencils and inks are provided by Arthur Adams!  The forty (40) page story is entitled; “Gumby’s Summer Fun Adventure” and the story lives up to the title!  It’s a rollicking fun story that begins with a neighborhood game of  Kick the Can!  Chubby is it and Gumby and Pokey hide.  When they are found by Chubby, they all race back to the can and Pokey wins by kicking the can high over a fence.  Unfortunately he kicks it too hard and breaks a window in their neighbor, Mr. Wooster’s garage.

All the other kids run away, but Gumby and Pokey do what’s right and go to see Mr. Wooster, only to find him depressed and lying on his couch ready to die.  They convince him to come back to their clubhouse and attempt to cheer him up, but before they succeed, Gumby is called into the house as he is suppose to babysit for Mr. and Mrs. Robot’s three robot children!

Gumby’s parents and Mr. & Mrs. Robot leave Gumby in charge until the babysitter can arrive in a couple of hours and she’ll stay with all the children until Mr. & Mrs. Gumby, as well as Mr. and Mrs. Robot get back from Stockholm, where Mr. Robot is to receive an award.  The parent leave and the kids play cowboys and indians, and when it begins to rain they move indoors and play with Gumby’s train set in the basement!

To move this along I’ll only hit the high spots; the youngest robot child is kidnapped by aliens, the babysitter arrives only to be revealed as a werewolf and finally space bears arrive, who are chasing the other aliens that abducted the robot child.  The bears take Gumby, Pokey and the other two robot children with them to find the “bad” aliens!  Eventually they track them to a deserted island where they all encounter pirates!

Gumby and company try to sail home only to become totally lost, but they do stumble upon Halloweentown in their journey!  Gumby, the friends and the pirates save Halloweentown from the dreaded pumpkin-eaters and the witches of Halloweentown help Gumby find the way back home via an airplane.  The pirates decide to stay and take up residence in Halloweentown!

So Gumby, Pokey and the three robot children finally make it home, to find that Mr. Wooster and fixed up their damaged home in their absence, and is no longer depressed, as he has found true love and gotten married to the local Avon Lady, who came and knocked on the door, while everyone else was gone!

And then Mr. & Mrs. Gumby and Mr. & Mrs. Robot arrive back from Stockholm and thus ends a grand summer adventure for Gumby and his pal, Pokey!  Definitely a fun romp from beginning to end!  And to wrap the issue up, the reader is gifted by a wonderful pin-up page of Gumby and Pokey riding a dinosaur drawn in lovely black and whit by Mr. Arthur Adams!

Here’s a last pic of the stars, Gumby and Pokey!: 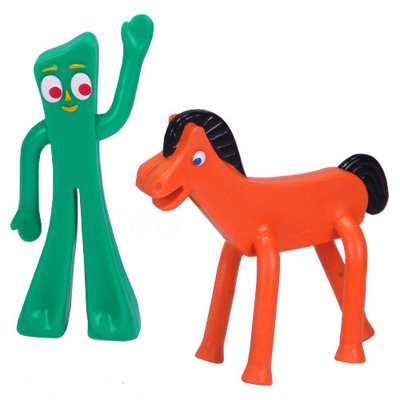 They still make and sell these bendable toys.  I myself still have a Gumby figure from way back when.  Maybe I need to find him a Pokey, one of these days, so he won’t be lonesome!  Till next week …