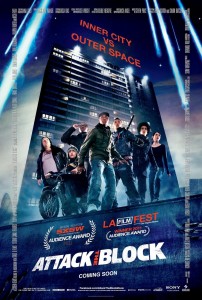 There are some movies out there that just knock the wind right out of you. Some of them are so bad that you can’t believe what you’re seeing. Others are so good that you can’t believe what you’re seeing. I try to never go into a movie with any kind of expectations. I just let the chips fall where they may. That being said, my jaw was on the ground for pretty much the entirety of Attack the Block.

Attack the Block is a sci-fi/monster movie from 2011. Being a British film, there’s not a person in this movie I recognize other than Nick Frost (Shaun of the Dead). The film was written and directed by Joe Cornish, a man that has done nothing else that I’m familiar with. Attack the Block is about a gang of young teenagers that all live in the same building and have to defend their turf against a non-human threat. Everything about this movie is rock solid. The actors did a great job, the humor was delivered perfectly and the effects were fantastic. The creature design was pretty simplistic, but it worked very well with this movie. I hate when movies try to pull something off that just doesn’t work and ends up tainting the movie.

I don’t even know where to begin my praise of Attack the Block. This movie was all kinds of fun from the moment it started. The movie starts with a pretty dark (figuratively and literally) scene and I completely forgot that this was a monster movie. When the sci-fi stuff kicked in it was almost a surprise. I had a brief moment of shock before my eyes lit up and I was completely sold on this movie. Apparently I’m not the only one to feel this way because Attack the Block has received critical acclaim from all over the world.

A lot of modern horror flicks disappoint me and always leave me wanting more. It seems that more often than not I see a modern horror movie and it feels like I’ve seen it before, because they’re all so similar. Attack the Block was refreshing, original and awesome. I watch a lot of horror movies and this is one of the few that stands out for all the right reasons. I had never heard of Joe Cornish before this movie, but I sure as hell hope I hear a lot more from him if this is the kind of quality movie he’s capable of creating.

I highly recommend this movie to anyone remotely interested in monster movies. The only thing I would have to warn people about is the dialogue. Attack the Block is filled with thick British accents and slang, and can easily lose someone not used to hearing it. I didn’t have any problems and I loved it. It felt like a modern day, harder edged British version of The Monster Squad and you all know how I feel about The Monster Squad.