No comic book character deserves to be a hero more than Iron Man. 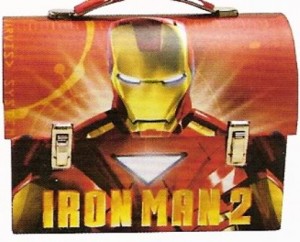 An Iron Man lunchbox. There weren't many of these when I was a kid.

And I don’t mean a superhero; he’s already been filling that roll for nearly fifty years. No, I mean a pop culture hero; one whose likeness can adorn a tee-shirt or lunchbox or toothbrush and look right at home at the local Wal-Mart sitting next to similar merchandise with likenesses of Spider-Man, Batman, and Sponge Bob. 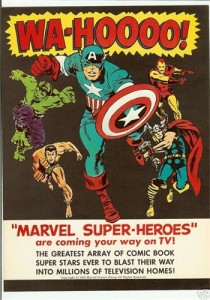 The Marvel Superheroes Cartoon. Prior to the movie, cartoons were about the only place you'd find Iron Man outside the comic.

Iron Man has long been a plenty popular character among comic book fans over the years, but remained largely unknown to the world at large until the 2008 movie came along and reminded audiences that there were other superheroes out there. It was not only the most successful adaptation of a non-iconic comic book character, it was acknowledged by many as being the best adaptation of any comic book character. And perhaps more importantly, it wasn’t graded on the kind of sliding scale that comic book movies sometimes are judged upon; it was largely praised as being a great film, period. It wasn’t seen as a movie just for kids or comic geeks; it was a movie enjoyed by a whole dang lot of people.

There have been other such attempts; Daredevil, Ghost Rider, and the Fantastic Four among them; that have enjoyed moderate success, at best, or crashed and burned, at worst. It would have been nice to see these efforts succeed better than they did, to be sure, but even if they had, their success would not have been so sweet in the eyes of comic fans. But why? Why is Iron Man the one comic character so deserving of being elevated to iconic pop culture status?

It’s because that, despite the character’s success and popularity in the comic world, Iron Man has been crapped on too many times over the years. By the fans? Well, yes, at times, but during the worst of it this fan reaction was only in response to Marvel themselves taking the biggest crap they could on their own character. 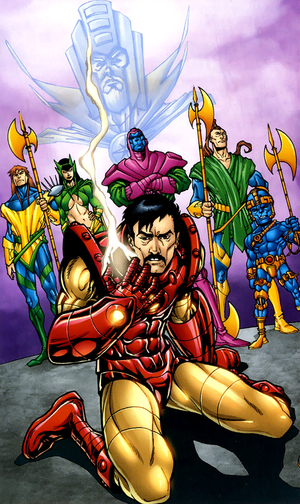 Avengers - The Crossing. A dark time for Iron Man fans.

When people think of Marvel dumping on their own characters, they often talk of the Spider-Man Clone Saga from the mid-90s being the benchmark for such unfortunate and boneheaded storylines. And largely because of this, they forget about another travesty that was taking place in the Marvel Universe around the same time. And that travesty was this thing over in The Avengers called The Crossing, a storyline where, from out of nowhere, Iron Man betrayed The Avengers to their longtime nemesis Kang the Conqueror, after revealing that he had apparently been following Kang’s manipulations for some time. This revelation was a betrayal, all right, not only to the Avengers, but also to their fans. It was seemingly drummed up for no other reason than the usual ones: to shake up the status quo and hopefully increase sales. 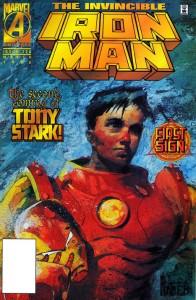 The New Teen Tony only sunk the chararacter further.

But what it succeeded in doing was what these kinds of shakeups usually end up doing: leaving a worse mess than what was there in the first place. With the character of Tony Stark now hopelessly tainted and corrupted, Marvel tried to fix things but instead did something else they’re notorious for doing: digging themselves in even deeper. This “fix” begat the whole Teen Tony thing, where a teenage Tony Stark was brought to present day to possibly fill the role of his future self. Just about everyone hated this story, possibly even more so than The Crossing itself. And this debacle was one of the factors that eventually led Marvel to decide to essentially reboot their universe with the whole Heroes Reborn relaunch. Which; guess what? That was even more reviled by many. 1996 was not a time when anyone would ever have envisioned Iron Man being a blockbuster movie. 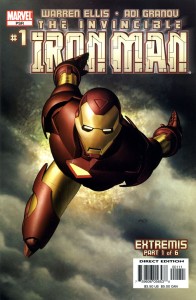 Warren Ellis not only had a nice run on the book, but helped define the modern day version of the charcter.

But seeing as how the Marvel Universe still exists, we all know that they eventually righted the ship and things sailed along pretty smoothly after that. There were some pretty great runs in Iron Man by excellent writers like Kurt Busiek and Warren Ellis, and all seemed good. But then, along came the Civil War event in ’06, where Marvel once again turned Tony Stark into Public Jerkwad #1 by making him into a government stooge who was responsible for the superhero registration act that fractured the Marvel U, ruined the careers of characters like Peter Parker, and resulted in the apparent death of Captain America as well as many others. 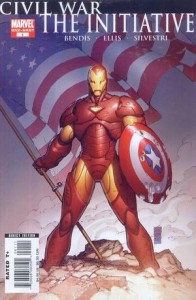 A few things-will-never-be-the-same events later, things are now thankfully pretty much the same as they were before Civil War. While Marvel might be content to merely no longer crap on Iron Man, Hollywood, on the other hand, in that time has done no less than worship him. With two blockbuster movies and an imminent third featuring the character that’s generating far more buzz than the upcoming Dark Knight Rises and Amazing Spider-Man, Hollywood knows how to treat its characters, even if the publisher that created them often does not.

At Marvel, Iron Man has sometimes been the dog that its owner kicked when no one was looking. But now, lots of people are looking. A character that has been mistreated too many times is finally getting the proper respect that has been so long deserved. The Avengers, the movie, could well be the film that turns Iron Man, and maybe some of its other characters, into icons.

So, Marvel, next time you feel the urge to turn Tony Stark into a villain or a kid or a jerk, just remember all of the additional merchandising and licensing associated with iconic characters that just might be at stake.

A lot more people will be watching.