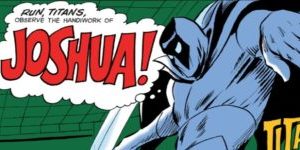 Welcome back to My Hero, where one-off super heroes are more worthy of notice than ones with 300 issues under their belt! Today’s selection from our Custom Action Figure Collection is Joshua, a costumed vigilante who originated in 1969’s Teen Titans #20.

Teen Titans #20 opened with the team’s headquarters being invaded by a costumed intruder! Using a variety of gadgets to hold off the young heroes, he revealed he was there to ask for their aid. It seems that tensions between youth protestors and police officers in his hometown were reaching a boiling point, and he wanted to enlist some superhuman assistance sympathetic to both sides in preventing violence from erupting.

This was a very good call on his part, as the ultimate cause of the unrest turns out to be the Teen Titans recurring foes from Dimension X. In a somewhat tone-deaf twist, those aliens were funding local criminals who in turn backed the hapless young dupes doing the protesting. Joshua’s brother is the head dupe, and the Titans help Joshua (which appears to be his actual name) defuse tensions, beat back the aliens, and keep his brother alive. With peace restored, he retires his costumed ID and never appears again.

But wait! That wasn’t the original planned story. Marv Wolfman (then 23) and Len Wein (then 21) wrote a tale of the Teen Titans helping an African American hero named Jericho defuse racially charged tensions in his home town. Neal Adams, who was brought in to alter the story at the last moment (and who wasn’t exactly shy about tackling social issues in his work), remembers the story as being heavy handed and overly simplistic. What we ended up was the compromise version, and DC wouldn’t have even a one-off black superhero until Neal Adams and Dennis O’Neil created substitute Green Lantern John Stewart in 1971.

I first heard about Joshua’s history as a teen while wasting my evenings studying every word of the excellent fansite TitansTower.com, where an article about the story switch originally printed in Comic Book Artist Magazine is reprinted. He was brought back to my attention while researching obscure and one-off DC heroes a couple years back, arising from my fascination with Lois Lane’s hopeless hanger-on The Human Cannonball. Joshua has a cool design and, let’s face it, breaking into Titans HQ is pretty good power move in your first appearance. Sadly, it remains Joshua’s only appearance and the reason why he made it into our Custom Action Figure Collection. All the same, this week he’s My Hero.