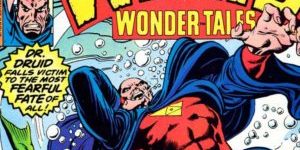 Welcome back to My Hero, where the obscure characters that make up our Custom Action Figure Collection take center stage! Today, we’re looking at a Marvel hero: a doctor who traveled to Himalayas and learned the ways of the mystic arts, later joining the ranks of The Avengers…but not the one you’re thinking of.

The Amazing Adventure of Dr. Druid

1961’s Amazing Adventures #1 featured a short tale entitled “I am the Fantastic Doctor Droom”, in which American doctor Anthony Droom travels to Asia at the request of a Tibetan lama. After going through a battery of dangerous tests (including battling a Lion-Gorilla, a chimera of animals not at all native to the Himalayas ), the doctor finds that the lama is not actually ill but instead looking for an heir. Granting Dr. Droom mystical powers (and Asian features), the newly minted sorcerer hero would battle evil for five of the six issues of Amazing Adventures published before fading into obscurity for a while. Dr. Strange, a hero with a very similar origin story (minus the cosmetic race lift), would debut two years later to much greater success.

Fast forward to 1977. Marvel reprinted the old Dr. Droom stories in the anthology Weird Wonder Tales starting in #19. The stories were slightly altered, with hero being renamed “Dr. Druid” and holding on to his western facial features after gaining his powers. The title would only last four issues with Dr. Druid’s reprinted stories gracing the cover, but he was now part of the Marvel Universe proper. He would do guest shots in the Incredible Hulk and Ghost Rider in 1977, likely to promote Weird Wonder Tales, before once more fading into the background. The early 80s would feature Doc Druid guesting in the pages of Contest of Champions, Power Man & Iron Fist, and The Avengers…which would give him his biggest break a few years later.

1987’s Avengers #276 added Dr. Druid to the ranks of Earth’s Mightiest Heroes, even ascending briefly to the role of team chairman. He only appeared in a total of 21 issues, but this lead to him being the mystic-of-choice for Avengers-related titles like Captain America and Quasar for years to come. He even took over as leader of the Secret Defenders from Doctor Strange in that series fifteenth issue, and earned his own mini-series in 1995. Unfortunately, that mini-series featured him dying in the final issue, so his time in the limelight came to an end after that.

My first encounter with Doctor Druid came when he was drafted into the villainous zombie Legion of Unliving in Avengers (1998) #10. His proximity to my pet favorite Thunderstrike (I was eight, it was the 90s, a ponytail and leather jacket appealed to me) piqued my interest, leading me to his time with The Avengers and his dalliance with space pirate Nebula. The character still pops up any time dead Avengers get temporarily resurrected en masse, but he’s unlikely to come back for good any time soon. Despite his peak coinciding with the beginning of Marvel’s Toy Biz era, he never got an action figure. That means customizers are the only way to get him in plastic, making him (at least for this week) My Hero.