My Golden Age: How Our Hero Learned Leadership

I love the character Cyclops. I’ve never in all my years reading comics ever understood why people thought he was a boring character. Especially X-Men fans who feel that way, when the final page of the X-Universe is written it’ll be from Scott Summers perspective. He was Xavier’s first X-Man, and I would assume that he’ll be the very last. His singular (yes, that’s intentional) vision of achieving Xavier’s dream is one of the things that made me appreciate and root for the character. I don’t believe that Scott Summers was born to lead the X-Men, but I do think he grew into it. In fact, I believe that he’s grown to become the best leader in all of comics. 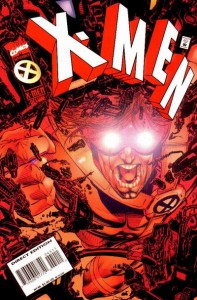 For me this realization reached its zenith when I read X-Men: The Fall of Avalon (#42-44) It was the first arc after “the Age of Apocalypse” written by Fabien Nicieza with Art by Paul Smith (an artist I underappreciated in my youth, but now love, as you should too) he was on art duties for issues 42 and 43, with Andy Kubert taking over on issue #44. The story revolves around Magneto’s team of Acolytes (which also includes the former X-Man Colossus) led by Exodus during Magneto’s comatose state (due to Xavier mind wiping him in X-Men #25, which leads to all sorts of greatness that I will get into soon) finding another mutant floating unconscious in space. They bring him aboard their floating asteroid base (Comics!) where the creature/person starts siphoning the life energy of those around him. The mutant that they’ve brought aboard is actually a reality displaced Holocaust (a horseman of Apocalypse in the Age of Apocalypse universe) in that world Exodus is a member of Magneto’s X-Men, believing this to still be his world, he attacks his “enemy” Exodus. The battle between the two begins to destroy Asteroid M. This sends the Acolytes scrambling to escape pods. Colossus attends to the comatose Magneto finding an escape pod for them, while Acolyte Amelia Voght trying to contact the X-Men for help inadvertently teleports Scott Summers (Cyclops) and his wife Jean Grey to the Asteroid. Exodus and Holocaust continue to battle each other, Jean Grey rescue Skids (a mutant that Scott and Jean saved as members of X-Factor)  they plummet to earth, Jean is protected by the combined might of her and Skid’s power. Scott is in another part of the asteroid with the remaining Acolytes (being held together by one of their members) that crashes into Australia.

This is where my appreciation for Scott Summer’s leadership was cemented. Issue #44 revolves around Scott and the surviving Acolytes making their way through the Gibson Desert in Australia. The Acolytes are sworn enemies of the X-Men, the Acolytes have tried to kill the X-Men on multiple occasions. They hate the X-Men, and here is the very first X-Man, the embodiment of Xavier’s dream leading them through the desert to safety. The Acolytes complain along the way, convinced that they are going to die out there, a day has passed and when just as all hope is lost Cyclops (carrying an exhausted Acolyte) leads them to their destination, an abandoned Australian outpost that the X-Men made their base when the world thought them dead (shoutout to the 80’s heeeey!)

I’m not a fan of where they have taken Cyclops in recent years. I haven’t been a fan of the militant general Cyclops that resembles Magneto more than Xavier, and I’m not pleased with him becoming possessed by the world destroying Phoenix force that killed his wife, I don’t believe a man that lost as much as he has to the being would put so much fun into the Phoenix. I do hope however that after all this is said and done they get the character back to his roots, and I hope they look to issue #44 of X-Men as a starting point to what made that character great. That issue, those moments are what made me believe that Scott Summers is the greatest leader in the Marvel Universe. He put all others before himself and helped his enemies who had countlessly tried to kill him and his friends because he believed in a dream where they would one day live in peaceful coexistence together.