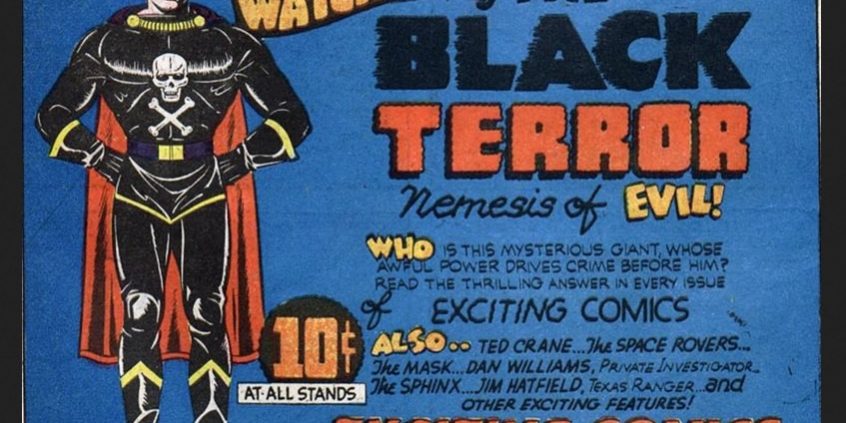 Welcome back to My Hero, wherein we here at Back to the Past tell you why the obscure characters from our custom action figure collection are great! Years ago, we purchased the life’s work of an artist and comic fan whose chosen medium was granting forgotten comic characters the action figure immortality denied to them by major toymakers. We’re still sorting through it all, and we’re making new finds every week! This week’s find, who will soon be available on ebay, is The Black Terror and his sidekick Tim! 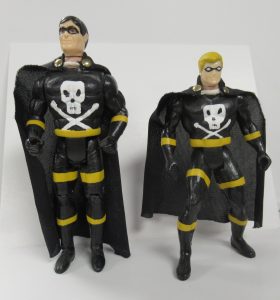 Black Terror and Tim as they appear in our custom action figure collection.

Pharmacist Bob Benton was working on a special drug to help people who were “run down”. His assistant Tim screwed up an experimental formulation by adding Formic Acid. This caused a reaction that released a gas Benton named “Formic Ethers”, which he inhaled. It turns out that the formic acid was the key ingredient needed, as it granted him superhuman speed, strength, and agility.

Experiencing these new powers, Benton decided he would begin battling crime. Fashioning a black costume inspired by the Jolly Roger, he dubbed himself The Black Terror! Tim, once again being a tad overeager, decided his mentor would need a helping hand in his crusade. Tim huffed some of the Formic Ethers, gained powers himself, and put on a smaller version of Bob’s new costume. Thus, Tim became….Tim. At least until his final appearance, where he finally became Kid Terror. 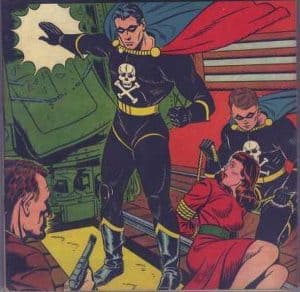 The Black Terror & Tim in the Golden Age! Tim’s hair color changed a lot over the years.

The Black Terror and Tim were some of Nedor Comics’ top characters. They appeared in sixty issues of Exciting Comics, thirty-one issues of America’s Best Comics, and twenty-seven issues of a self-titled solo issue. As Golden Age comics from anyone other than the future big two go, that’s a strong run.

Over time, like so many Golden Age characters, The Black Terror lapsed into the public domain. AC Comics brought him into their FemForce universe in 1983. Roy Thomas used him as a supporting character in his 1986 mini-series love letter to the Golden Age, Alter Ego. Eclipse Comics gave Black Terror his own gritty reboot with a three issue mini-series in 1989. Alan Moore revived all the Nedor Comics heroes for his Tom Strong spin-off Terra Obscura in 2001. And since 2008, both the Black Terror and Tim have been leading heroes in Dynamite Entertainment’s ongoing Project Superpowers universe.

And yet there are still no toys of them! None of the universes they appeared in got their own toylines.That means that if you want an action figure of this dynamic duo, you need to turn to something like our custom action figure collection. Speaking of which, if you’ve got collection like it – be it original art, custom action figures, convention sketches, whatever – and are looking to sell it, get in touch!