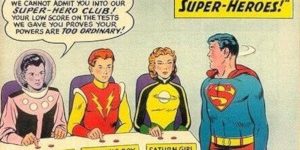 Welcome back to this week’s RETRO REVIEW.  I’ve dug deep into the comic book vault, over in the DC Comics annex, and brought out, to the light of day, Adventure Comics # 247.  It is cover dated April 1958, and features Superboy in the lead story spot in the front of the book and a Green Arrow and an Aquaman story in the back-up feature spots.

But what is historically significant about this book is that within the Superboy story, is the introduction of the Legion of Super-Heroes!  Love ’em or hate ’em, this group of teenagers from the future made it’s mark on DC Comics and comic book readers and created a sub strata of comic book fandom that still exists today, sixty-one years later!

So let’s take  look at where it all began.  First up, here is that cover, which is drawn by Curt Swan and inked by Stan Kaye:

The story is entitled, simply; ‘The Legion of Super-Heroes” and it is written by author, Otto Binder, with the both the pencils and inks done by artist, Al Plastino. The story begins with three teens from the future, who go back into the past, to 1958, and offer Superboy membership in their super-hero club. Superboy returns to the future, 2558, with the three super-powered teenagers and they show him around.

They take him to the Space Satellite Tours, where a space ship is named the Jules Verne, they take him to an ice cream parlor, where he is offered nine delicious flavors from nine different planets, they tour a robot factory and even visit a school of the future. Eventually, they all end up at the Super Hero Clubhouse, where Superboy is introduced to the various club embers, though only Lighting Boy (here after known as Lightning Lad), Saturn Girl and Cosmic Boy are identified.

Superboy is given three super tasks to accomplish so that he can join. In these tasks he will be pitted against one of the other super heroes. First up is to locate and bring up a statue from the ocean, where it has been lost. He must compete against Saturn Girl in this first test. Superboy gets distracted saving a run away robot on the way and because of this Saturn Girl beats him, finding the statue and using her mental powers to coax a sea creature into raising the statue from the deeps.

The next test has Superboy going against Cosmic Boy. They must save the crew and passengers from a crashed rocket-liner. As they race to the site, again Superboy is distracted by a falling meteor, which actually an old US satellite, which is on target to hit a city. Again Superboy, saves the day, only to lose the contest to Cosmic Boy, who manages to rescue the people before Superboy can get to them.

Finally, the third test pits Superboy versus Lightning Boy (Lad). The “Nova Express” has left Earth for Mars, but it has been discovered that it has a leaking fuel tank and will not have enough fuel to make it all the way to Mars and will likely get stranded out in space.

But when Superboy fails to complete three simple tasks, the Legionnaires pretend to reject him, until they reveal that the three tasks were merely initiation pranks which proved he is a good sport. Will the third time be the charm, will Superboy be able to come up winner this time?

Don’t count on it! As both heroes start to blastoff into space, Superboy sees that an “invisible eagle” has escaped from the local interplanetary zoo and chooses to capture and rescue it. Meanwhile Lightning Boy has reached the Nova and warns it to return to Earth for repairs before it runs out of fuel.

So for Superboy, it’s three strikes and he’s out! And the cover image comes true, as the Legion of Super-Heroes reject Superboy from membership into their club! With tears in his eyes Superboy gets ready to return to his past, but wait. The three heroes stop him and explain how in each test, they caused the distraction, which Superboy choose to deal with, which then caused him to fail in his given test/task.

As the story comes to it’s conclusion, Superboy is elected as the newest member of the Legion and before he returns back to the year 1958, he takes care of one more potential disaster at the South Pole and then he returns to the past! And thus was introduced the newest super-hero team to the DC universe. A team that has had it’s ups and downs through the years and a team that is scheduled to return to comics later this year.

So whether you love them, or hate them, the saying is true … Long Live the Legion!