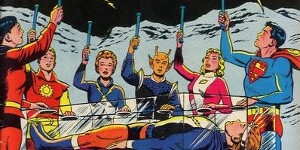 Hey gang, welcome back for another RETRO REVIEW.  This week it’s time for another fine comic book from D C Comics.  This one is cover dated September 1963 and it is Adventure Comics # 312!  It features the Legion of Super-Heroes and it has a very nice cover drawn by Curt Swan and inked by George Klein, though I understand that the faces (heads) were inked separately by regular Legion penciller, John Forte.  Take a look: 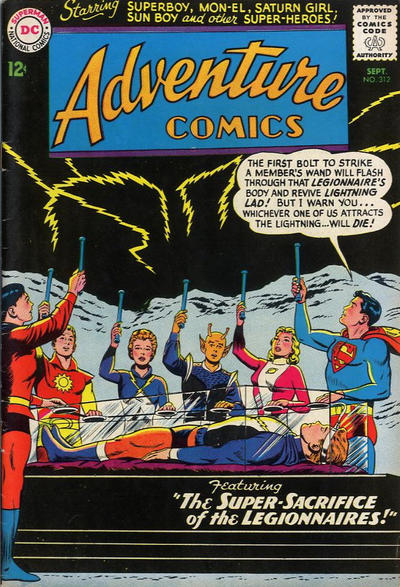 This comic was the first I ever read featuring the Legion of Super-Heroes, and I probably read it at the barber shop my dad took me to to get a haircut.  Needless to say I’ve since tracked it down and added it to my collection!  The cover shows six Legionnaires standing around a glass coffin holding some kind of wand with lightning flashing around them.  Superboy is saying that the first bolt to strike a wand will kill the legionnaire, but will revive the deceased Lightning Lad!  Wow, pretty dramatic to my then, nine year old eyes!  Heck, it’s still pretty dramatic!

The story is entitled; “The Super-Sacrifice of the Legionnaires!” and is written by Edmond Hamilton and both, pencilled and inked, by the aforementioned, John Forte.  Hamilton is well known for his Science fiction novels, as well as, his comic book writing career, so he knew how to write a gripping yarn!  At least I think so!

The book opens with various Legionnaires reporting back to their clubhouse with the results of their search for a way to revive their dead comrade, Lightning Lad.  He had perished six months earlier during an adventure recorded in Adventure Comics # 304, cover dated January 1963, when he had taken Saturn Girl’s place on a mission.

Saturn Girl has telepathic powers, for those of you not in the know.  And as each Legionnaire tells of their failure to find a way to bring back Lightning Lad, she catches a glimpse of stray thought from Mon-El.  It seems that he did know a way to revive Lightning Lad but he’s lying about it!

When she tries to read his mind further, she can’t, as he is able to guard his thoughts from her somehow.  Superboy vows that the Legion will continue to try to find a way to bring Lightning Lad back from the grave!  The Legionnaires split up into groups to continue their search and Saturn Girl attaches herself to Mon-El.

The story follows Superboy, who is unsuccessful, then switches to Mon-El and Saturn Girl, who are checking out a space creature that dies, then comes back to life for some reason!  But it turns out not to be true, a newborn creature takes the place of the dead on, the dead one doesn’t return to life.

Sun Boy, Lightning Lass (Lightning Lad’s sister and fellow Legionnaire), Chameleon Boy and his pet Proty (a shape shifting protoplasmic being) find a possible cure on the Planet Skor.  But when they try it on Lightning Lad, it doesn’t work!  Saturn Girl discovers that Mon-El may know of a way to save Lightning Lad that is on his home Planet of Daxam and she tricks him into taking her there!

Once there she tells him that she is on to him, and he finally tells of the one way to revive their fallen comrade, but a living being must sacrifice their life for the dead’s revival!  Of course each of the Legionnaires volunteer to give their life to revive Lightning Lad.  So they decide to let chance decide and so Mon-El builds the necessary equipment and they all have a metal rod which they will hold up to the lightning bolts until one is struck.

Saturn Girl decides to tilt the odds in her favor, but substituting her plain metal rod with a rod of Duralim, which has an even greater attraction to lightning.  She chooses to do this because she feels she should have died, rather than Lightning Lad, who had replaced her on that last mission.

Cameleon Lad’s pet Proty has witnessed Saturn Girl’s plan and then wanders away into a near by cave.  Once Saturn Girl’s replacement rod is complete she goes to search for Proty.  Once all the Legionnaire’s have returned with their rods they form around the coffin, as depicted on the cover.  Lightning strikes the rod held by Saturn Girl.  She dies, and Lightning Lad is revived!  Again, pretty “adult” for a nine year old!

But wait, it turns out it wasn’t Saturn Girl, as she arrives, coming out of the cave, after her unsuccessful search for Proty.  It turns out that Proty had lured Saturn Girl into the caves so that he could take her place, and die to revive Lightning Lad!  Since Proty could not speak, he communicated with Saturn Girl through his own telepathic powers, so he must have read her mind and learned of her plan to sacrifice herself to save Lightning Lad, but instead sacrificed himself, thus saving Saturn Girl.

I know a lot of people don’t care for the Legion, they find it’s beginnings to “simple”, or the opposite, they find the history is to “complicated”.  Can it be both?  But I’m telling you this issue ought to rate up there with the best that comics books have to offer!  And that’s my opinion, so what’s yours?