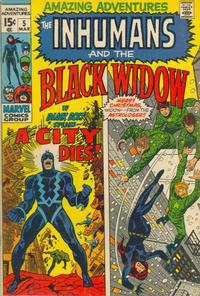 Hello and welcome to this week’s RETRO REVIEW!  I’m back from a week long vacation and ready to saddle back up and ride on out to discover another great past issue, or issues in today’s instance, to bring to your attention.  This week I’m talking about Marvel Comics’s Amazing Adventures #s 5 through 8.

Cover dated August 1970, Marvel Comics published Amazing Adventures # 1.  A split book similar to what they had published in the past, with Tales to Astonish and Tales of Suspense.  But this one featured; The Inhumans and The Black Widow!  The Inhumans was written and drawn by Jack Kirby and the Black Widow was written by Gary Friedrich and drawn by “Big” John Buscema!

But these creative teams would not stay with them new strips.  Nope, by issue number four, Jack Kirby was done and had left Marvel Comics for, what he hoped was, greener pastures over at D. C. Comics.  But that’s a whole other story for a future RETRO REVIEW.  And John Buscema had to pick up the large hole left by Jack’s departure, so he was gone from the Black Widow strip, as well.

With issue number five, cover dated March 1971, Roy Thomas came on board as the writer for The Inhumans, with art by the incomparable Neal Adams, normally a D C guy!  Roy managed to write three of the four issues, with Gary Conway subbing on issue number seven and these are the four issue I want to address in today’s column!  So hold onto your hats, here we go.

When the reader opened issue number five, there was quite a change, as I said earlier, Jack Kirby was gone and Neal Adams was on board.  Two very dis-similar artists by far.  Jack’s art popped off the page, coming right at you without correct anatomy.  Neal on the other hand, drew excellent anatomy and rendered the characters in a life-like manner!  Some people love one, others love the other.  I, actually love both artists!  They each bring something unique to the comic book page and I greatly appreciate each gentleman’s skills!

The story in issue number five is entitled; “His Brother’s Keeper!”  The story opens with Black Bolt leaving the Great Refuge on a mission to an unnamed city, presumably in the United States, leaving behind members of the Royal Family, Medusa, Gorgon and Karnak!  We also “meet” the fourth member of the Royal Family, Triton, as Black Bolt flies overhead, across the ocean, on his way to “the City”.

We then discover that Black Bolt has left his brother, Maximus “the Mad”, sealed inside a “impregnable cylinder” and that Gorgon and Karnak think the worst of him because of this.  And they set out to do something about it!  In fact by the end of this ten page story, they manage to free Maximus from the “impregnable container”.  I guess it wasn’t impregnable after all, though it did take both Gorgon and Karnak working together, using both their powers, to open it, when each failed alone!

In the mean time, Black Bolt reaches the city and discovers a child being used in a robbery.  When the child refuses, he is struck down by his uncle, and Black Bolt sweeps in to mop up the gang members and rescues the young boy.  It’s at this moment that Maximus is freed and using his new found power, he causes Black Bolt to experience “total amnesia” from across the ocean!

Issue number six opens with Gorgon and Karnak’s realization that they have screwed up royally (pun intended!) and then Maximus forces then to battle each other.  The scene shifts back to Black Bolt.  The young boy convinces him to speak to him and though Black Bolt turns away, he utters a quiet …”I –” and the power of his voice destroys a Navel shipyard!  Then it’s back to the Great Refuge, where Medusa has joined the fight, but Maximus wins the day and the Royal Family only manage to escape when Triton returns to the Great Refuge and saves them with a flying transport vehicle.  They escape, only to crash their transport on the last page!

Issue number seven opens with the Inhumans waking up facing Chinese soldiers.  They think they are being attacked and so lash out at the humans.  Again Triton enables them to escape and they fly, in a new ship, towards America.  Back in the now named city, it’s San Francisco, if you care, Black Bolt is found by Walter Dibbs, but you can call him … Mister Dibbs!  He’s got a hidden agenda of his own, don’t you know!  Hey, it’s the comics!

The Royal Family land on a beach in California and immediately get in a dust up with a bunch of body builders!  Triton draws the body builders away, enabling Medusa, Gorgon and Karnak to don “regular clothes”.  An aside, this is the only time I can ever remember seeing the Inhumans not in their costumes or in some other Inhuman garb.  They hear on a cabby’s radio that there is some sort of disturbance on Johnson Street (I wonder if that’s Pete Johnson Street?) and rush there.  There they find Mister Tibbs, oops, I mean Mister Dibbs, a tank and Black Bolt astride it!  Dibbs is “preaching” that the ‘brothers’ stand up and no longer allow themselves to be “crushed under the heels of the white man’s society!”  Yikes, here’s Neal Adams doing the art for another relavant story, like he did for D. C. Comics’ Green Lantern.

Issue number eight brings the story line to a conclusion, in the chapter entitled; “An Hour For Thunder!”  In which Neal gets to draw the Avengers, this about the same time he drew a number of chapters in the Krell/Skull War in The Avengers comic book proper.  And I love the way Neal draws Captain America and the Vision!  The Avengers are watching the situation in San Francisco on television and Thor says he’ll take care of it and the whole Avengers won’t be necessary.

Back in Frisco, Dibbs fires a smoke bomb from his tank (I wonder where he got that? the tank that is) and the Royal Family springs into action, and of course that’s the moment when Thor also arrives, and there is a big donnybrook between the Inhumans and Thor!  After a six page battle between all the protaganists, Dibbs and his followers are defeated (did it really take three members of the Inhumans AND Thor to take them down?). It’s then discovered that Black Bolt isn’t really Black Bolt, but is the young man’s uncle from issue number five, in Black Bolt’s costume.  And in the storm, that Thor has called down, lightning strikes the antennae of Black Bolt’s costume killing “Uncle Roscoe”!

Thus ends Neal Adams short four issue run drawing the Inhumans.  These four issues also have a couple of nice Black Widow stories written by Roy Thomas and drawn by Gene Colon, as well as, Don Heck, with inks provided by Bill Everett.  The two seperate story lines continued on through issue number ten, and then were replaced by the X-Men’s Beast, in solo stories.  In fact, it was these stories where Hank McCoy became blue and furry!  Though like the Hulk, he first was gray!

I give these three issues three (3) out of five (5) Legion Flight Rings. 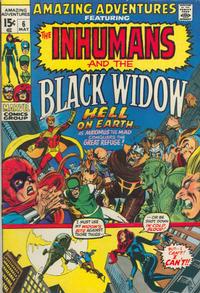 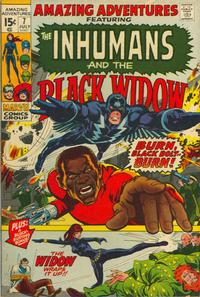 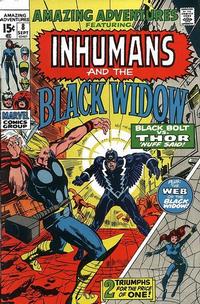