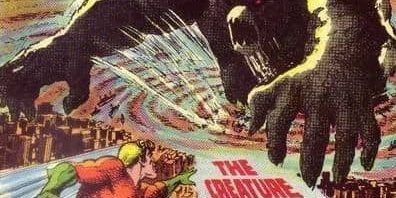 This week I’d like to offer up the final issue of DC’s Aquaman, # 56, cover dated April 1971.  The story is entitled; “The Creature That Devoured Detroit!” and it is written by Steve Skeates and beautifully drawn by Jim Aparo.  The story begins with a “normal joe” coming home and turning on the television to watch Johnny Carson on The Tonight Show, oops, I mean watch Warren Savin on The Warren Savin Show!  Warren even has his own Don McMahon and Jim Aparo’s characterizations are spot on for Johhny and Dandy Don!  Aquaman is announced as a guest on the show and after Johnny’s, I mean Warren’s monologue the show is interupted by a news bulletin, declaring a state of emergency has been declared in Detroit, due to the heavy growth of algae that threatens to deluge the city!

Aquaman is announced but doesn’t come out, as he’s already left, to rush to Detroit to see if he can help.  A new super-hero is introduced, Crusader, and he is shown dealing with some bad guys and then Aquaman goes looking for his friend, the former police scientist, Don Power, who now runs his own private lab.

The reader finds out, along with Aquaman, that the algae’s growth is due to a satellite which is turning the night into day to make it easier to cut down on crime and that Aquaman’s friend, Don Power is responsible for the satellite.  It’s been launched and in operation so that criminals can not hide in the dark of night, but because of this, the heat and light are causing unlimited algae growth.  The reader also learns that Don Power is Crusader, and that he needs the light at night to enable him to see, as he is losing his eyesight and going blind.

Actually quite an original plotline, even though not your “normal” super-hero storyline, as it dealt with a realistic type of ecological menace.  Unfortunately, the promising story is quickly wrapped up in a couple of pages with the death of Crusader and the satellite’s destruction by Aquaman, with a simple push of a button!  Also an abrupt ending for Aquaman’s silver age comic book run!

Per the late Dick Giordano; “we were having fun and doing what ever we wanted to do, because the publisher Carmine Infantino never read the books.”  According to Steve Skeates’ original plot, Aquaman # 57 would have picked up right where issue # 56 left off, with the hero fleeing Detroit after destroying the satellite.  Aquaman would have made it to Lake Erie, only to discover that he has lost his ability to breathe underwater and his telepathic powers, as well.  But that was never to be, as issue # 56 was the last issue!

Believe it or not, the second part of the story actually did see print and it only took three years and another comic book company for it to see the light of day!  You ask where the second half of this story made it’s appearance?  Well, I’ll tell you, in Marvel’s Sub-Mariner # 72!  This may have made it the very first DC/Marvel cross-over or at least one of the earliest!

But that will be a review for another day!  So look for my next retro review, coming soon, i.e. next weekend!  Hope I see you then!  Oh, I’d have to give this comic only two (2) out of five (5) stars.  A neat story, great art, but way to rushed, plus we the reader had to wait three years to see the conclusion!