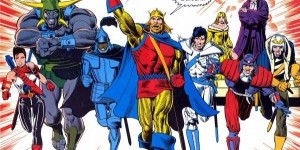 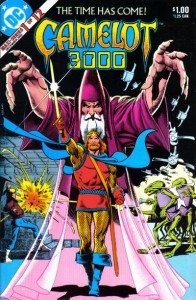 Welcome to another edition of RETRO REVIEW.  This week I’ll be talking about DC Comics’ Camelot 3000, cover dated December 1982.  This is the first of twelve issues, in what was DC Comics’ first Maxi-Series!  Nope, not a little three or four issue mini-series.  No sir, this was going to be a whopping twelve issues, with a finite story line, from start to finish.  The book was the brainchild of writer Mike Barr and penciller Brian Bolland, with a little help by Bruce Patterson, who inked Bolland’s pencils.  The story is a modern re-telling of the Arthurian legends, originally presented in Le Morte D’Arthur by Sir Thomas Malory, no less.  Brian Bolland provides a very nice cover to this first issue, as well.

The series follows the adventures of a revived King Arthur, as well as Merlin, and the reincarnated Knights of the Round Table.  The book opens in the future world of 3000 A.D. where an alien invasion has taken place.  England is almost completely at the alien’s control, and they are beginning to expand into other parts of the world.  The remaining people of England are attempting to flee to France, which is still free from the aliens, and we are introduced to Tom Prentice.  Tom is trying to escape with his parents, but they are killed by the aliens and Tom, who manages to escape, is forced to seek refuge at Glastonbury Tor, where he has worked as a student member of an archeological dig.

The aliens track him, and as Tom flees through the ruins, he stumbles upon the tomb of … King Arthur, the Once and Future King, which blocks his path.  He tries to move the tomb with a pry bar, but only succeeds in opening it!    Where upon Arthur arises and announces his return to the world of the living.  He wants to know how long he’s slept and discovers it was quite a bit longer than he suspected.  Though it has allowed him ample time to heal from the wounds he received battling Modred, before he slept.  Arthur defeats the aliens attempting to kill Tom and they comandeer the aliens hover craft and Tom flies it to a destination that Arthur directs them to.

And where is that?  Good question, it’s Stonehenge!  Meanwhile Barr introduces us to two other characters, first Jules Futrelle, a French industrialist and philanthropist and to Joan Acton, an American military commander.  It’s not revealed in this first issue, but they are none other than a reincarnated Sir Lancelot and Guinevere!

Back to Stonehenge and Arthur and Tom, Arthur manages to revive Merlin and he quickly takes them to a nuclear plant at Salisbury Down, where apparently the Lady in the Lake has kept Arthur’s sword, Excaliber safe all these years.  Merlin summons the Lady and she gives up the sword, but before Arthur can reclaim it, it disappears and reappears across the Atlantic Ocean in the middle of the United Nations Building in New York City, where it is once again buried in a stone, though in this case an anvil.

Without giving too much away, the first book in this Maxi-Series does an excellent job of providing the initial story and setting up a modern take on the classic Arthur Pendragon legends.  When England needs him most, Arthur has returned, to fufill the ancient prophecy.  He’ll not only have to face off againt the aliens, overtaking the modern world, but also his old nemesis, Morgan Le Fay, as well.  It’s an exciting series with a lot of twistsand tweeks on the old Knights of the Round Table story.  For example, Sir Tristan has been reincarnated as a woman, and Gwain into a monster’s body.  And what’s this about a tenth planet?  Remember, back in 1982 Pluto was considered the ninth planet, though now, has lost that honor!

The series was an eye-opening take on King Arthur and the Knights of the Round Table re-imagined by a talented writer and artist, therefore I give it a full five (5) out of five (5) Legion Flight Rings!  Pick it up if you enjoy the Arthur legends and would like to read a re-imagined take with very nice artwork! 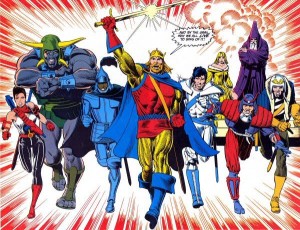