Well, we’ve made it to another Friday, so it is time, once again, for another Retro Review!  Yay!  Well, it at least makes me happy!  This week I’ve opened up Marvel Comics’ Captain America and the Falcon # 175.  This comic is cover dated July 1974 and features a cover drawn by Sal Buscema over a John Romita layout.  Personally I think the cover leaves a lot to be desired.  The story is entitled; “Before the Dawn” and it is written by Steve Englehart and pencilled by Sal Buscema and inked by Vince Colletta. 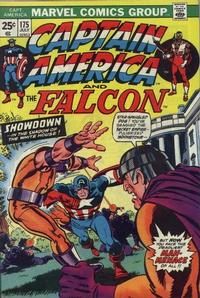 This issue is the conclusion for the Captain America / Secret Empire story line that began in Captain America # 163, a year earlier.  Leading up to this issue, the Secret Empire, through a group known as “Committee to Regain America’s Principles” (or CRAP), had used an ad campaign to undermine America’s belief in Captain America!  Another hero (though actually not) named Moonstone (not the future Karla Sofen, female one), had replaced Cap in the eyes of the public.  Cap is framed for a murder and sent to prison, only to be broken out and forced to run from the law as a fugitive.

The Secret Empire’s plan involved the kidnapping of a number of mutants, including most of the original X-Men, minus Scott and Jean, as well as, Havok and Polaris, and use them to power a weapon, and a flying saucer (Don’t ask, really)!  Cap has been left for dead on the splash page of issue # 175, only to be awaken by # 68 of he Secret Empire.  Soon he reveals himself to be Gabe Jones, agent of S.H.I.E.L.D., along with Peggy Carter, older sister of Sharon Carter.  Yeah Peggy and Sharon is a whole ‘nother story, trust me, I’ve no time to go into that story line here!  They hide on the Secret Empire’s saucer and work to free the captured mutants.

While this is going on, Cap and the Falcon have freed the X-Men and a new battle is begun.  First Cap takes down the Secret Empire’s Number One, then faces off against the more powerful Moonstone.  Cap defeats moonstone and the defeated villain, who had been posing as a hero, confesses all, on National television!  Number One recovers and flees into the White House.  Cap rushes to follow, finally catching up to the villain in the Oval Office!  Number One pulls off his mask, revealing his identity to Captain America, saying “High political office didn’t satisfy me!  My power was still to constrained by legalities”, and then shoots himself!

Cap is shaken to the core and leaves the White House in silence, his spirit crushed!  This leads to the next issue entitled; “Captain America Must Die!” in Captain America # 176 and him swearing off his Captain America identity and becoming Nomad, the Man Without a Country, the following issue.  The identity of the Secret Empire’s Number One was never revealed within the actual comic book, but plenty of hints are there for informed readers.  The comic’s author, Steve Englehart, has gone on record as saying that Number One was indeed, none other than, President Richard Nixon!  Now that’s quite a Whoa moment, if there ever was one, back in 1974.  Therefore, I give this comic book four (4) out of five (5) Legion Flight Rings!