This week’s RETRO REVIEW is Marvel Comics’ Captain Marvel # 17.  The comic is cover dated October, 1969, and features a very nice Gil Kane and Dan Adkins cover.  Not only does it show the good Captain Marvel front and center, but it also gives the reader another Captain, Captain America, that is, plus Bucky, well not exactly Bucky, it’s Rick Jones in the Bucky costume!  Here is that cover: 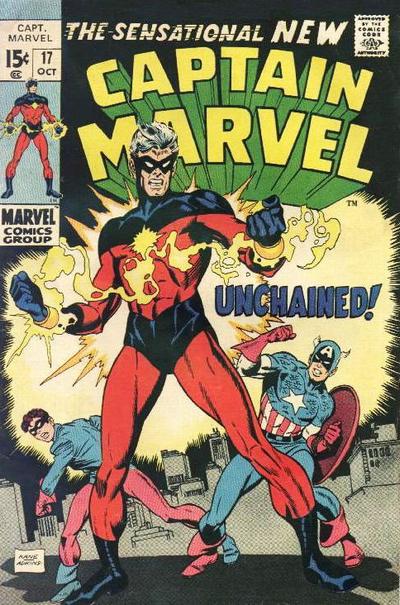 The previous issue introduced Captain Marvel’s new red and blue costume, which replaced his old green and white uniform.  And in a big twist ending, Captain Marvel # 16, ended with Mar-Vell being exiled into the Negative Zone, with no apparent way out!  Wow, at the time a big surprise ending!

Issue seventeen (# 17) entitled; “A Child Shall Lead You” is written by new Cap scripter, Roy Thomas.  And the pencils were supplied by the above mentioned, Gil Kane, with the inking provided by Dan Adkins (the cover art team), as the new art team, as well.

The splash page gives a brief recap of where Mar-Vell finds himself and why he’s there.  In a nutshell, the Kree Supreme  Intelligence has banished him there for being motivated by revenge against his foe and fellow Kree officer, Yon-Rogg.  But with the turn of the page the book focuses on a certain young Rick Jones.  Who is in search of his new partner, Captain America.  But what Rick doesn’t know is that it’s not Steve Rogers, but the evil Red Skull who has taken over Captain America’s form through the use of the Cosmic Cube!

Once Rick catches up with the person he assumes is Captain America, he is struck down by his ‘hero’ and rushes back to Avengers headquarters to pack his things and leave heroing behind.  It’s at this point that Roy and Gil also recap Rick’s time as the Hulk’s sidekick, bringing up new readers to date on all things Rick Jones!  After hitchhiking to the middle of ‘nowhere’, Rick sees a glowing Captain America figure and chases after him for four pages, until the ghostly figure leads him into a cavern and points at a couple of glowing bracelets!

He finds himself unable to resist the urge to put the gold glowing bracelets on (no one ever said Rick was smart!), and once on, they shrink to the perfect size.  In fact it appears they will no longer come off.  It’s at this moment that a ghostly floating head (Captin Marvel) appears to Rick and tells him to slam his wrists together with all the force he can muster!  He does so, and Captain Marvel appears in the place of Rick Jones!

It’s at this moment that Yon-Rogg enters the cavern, to late to secure the bracelets for himself.  Captain Marvel and Yon-Rogg battle for a couple of pages then Yon-Rogg flees in his Kree ship.  Captain Marvel discovers that with the “Nega-Bands” he can fly!  But to keep Mar-Vell from following, he hurls Carol Danvers (pre Ms. Marvel days) to her death.  Captain Marvel abandons pursuit to catch the falling Carol, only to find that it’s not Carol at all , but a bomb in the shape of a girl!  Hey I don’t write this stuff!

The ‘Carol bomb’ explodes, but does not destroy Captain Marvel, but the bomb has served it’s purpose, as Yon-Rogg has escaped!   The comic ends with Captain Marvel slamming the Nega-bands together and swapping places with Rick Jones once again.  But now, Rick is filled with Mar-Vell’s desire for revenge, and vows to find Yon-Rogg if it takes the rest of his life!

Wow, within twenty short pages, the Marvel Captain Marvel is changed completely, and set upon a new direction!  Quite an accomplishment, at least I think it was!  The art is excellent and the story really gets the job done!  Kudo’s to the new creative team, even if their days were numbered on the book, with Jim Starlin waiting in the wings to make this book his own in the very near future!  But this is where that begins to happen, so you definitely should add this book to your collection!