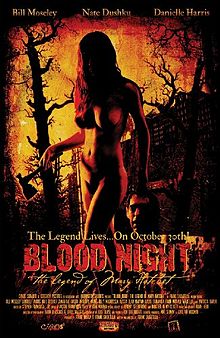 In honor of the awesome local horror convention, Motor City Nightmares, I’m going to talk about lesser known or underrated movies of some of the guests that will be attending this year. This week I’m going to highlight a movie starring Danielle Harris. Danielle is best known as Jamie Lloyd from Halloween 4 and 5 and Annie Brackett in the Rob Zombie Halloween reboot movies. As a huge fan of the series, I have to mention she also played Melanie Monroe in an episode of the awesome Eerie, Indiana. Today, however, I’m talking about her film Blood Night: The Legend of Mary Hatchet.

Blood Night: The Legend of Mary Hatchet is a slasher film from 2009 about a group of teens partying on the anniversary of the death of local murderer Mary “Hatchet” Mattock, a.k.a. “Blood Night”. Naturally, the party takes a sour turn when people end up dead. As an added bonus to Danielle Harris, we get Bill freakin’ Moseley (Chop Top from Texas Chainsaw Massacre 2) playing the role of Graveyard Gus.

Anyone that knows me knows I’m a very hard sell when it comes to modern horror movies. Too many modern movies try too hard to be shocking with the overly realistic scenes of gore filled violence. Others are painfully self-aware and have the hipster “we think horror movies are lame but we’re going to make one and poke fun at the genre the entire time” attitude to them. Thankfully this wasn’t one of those films. Blood Night had everything one could want and expect from a slasher film. It’s exactly what it says it is and doesn’t try to be more than what it is. I appreciated that.

The thing Blood Night had that just thrilled me was common sense. The people in charge didn’t show the actual kills. You see the aftermath, but not the actual decimation of the victim as it happens. I loved that. A lot of lower budget movies suffer from trying to show you things they just don’t have the ability to pull off and it ends up cheapening the experience. Blood Night avoided that and I think the quality of it was greatly boosted for it. Another awesome thing we get from Blood Night is a fresh take on the otherwise typical movie slasher. I won’t go into particulars with this as to avoid spoilers, but I appreciated the break from the norm.

Blood Night is one of those rare films that I watched and enjoyed, but ended up liking it the more I thought about it. As I’m writing this I’m finding myself appreciating it more and more. Danielle and the rest of the cast did an amazing job along with director and co-writer Frank Sabatella. If you have a chance to check this one out I highly recommend it, especially to fans of slasher flicks.