Retro Review: Challengers Of The Unknown # 45

Welcome back for this week’s Retro Review!  And what do we have today?  How about D C Comics’ Challengers Of The Unknown # 45, cover dated September 1965.  The story this issue is entitled; “The Queen Of The Challenger-Haters!”  But the first thing the comic buyer back in 1965 would have seen was the nice Bob Brown cover, showing the Challengers battling the Challenger-Haters on the cover!  I know it made me want to buy the issue, no question about it! 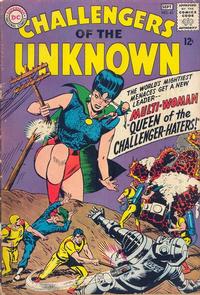 Challengers of the Unknown # 45

And just who are these Challengers of the Unknown?  Good question, if you’re not familiar with this second tier DC series!  Well, to borrow a line from my fellow video reviewer, Jim Johnson, I will tell you!  Sorry, Jim, I couldn’t resist, especially since I recently did my own I Will Yell You column, in place of Jim, during the week of April Fools!

The Challengers of the Unknown are four men who survived a plane crash and decided that since they were obviously living on borrowed time, they would band together and seek to solve the mysteries of the world, as well as, anything else that piqued their interest!  They are Kyle “Ace” Morgan (pilot), Matthew “Red” Ryan (daredevil), Leslie “Rocky” Davis (boxer), and Walter Mark “Prof or Professor” Haley (Scientist).  And later on they were joined by a fifth honorary, girl, Challenger, June Robbins (computer genius and archaeoligist)!  Their comic book beginnings were first seen in D C Comics Showcase # 6, cover dated February 1957, brought to light by Jack Kirby!  This was just two issues, and four months, from D C Comics Showcase # 4, which began the Silver Age with the newly re-imaged Flash!

The twist in the story this issue, is now that the Challenger-Haters have escaped, Multi-Man proposes that they ally themselves with the Challengers of the Unknown!  a few days later the Challengers respond to a fire in a Colorado coal mine?  Did they even have coal mines in Colorado?  Why not say it was in West Virginia, where everyone knows there were coal mines?  Anyway, they avert disaster only to exit the mine to find that the valley is frozen solid and President Lyndon Johnson is asking that the Challengers work with Multi-Man and his villains to solve this mystery.  The Challengers “smell a rat” but agree to cooperate and work with the villains.

Both teams, heroes and villains, venture deep underground, to discover the reason for the new ice age, where they encounter “space dragons” who radiate fierce cold or heat!  The former villains attack and are frozen or burned to death by the dragons!  The Prof secures a load of dynamite and the Challengers blow the tunnels shut, thus trapping the dragons, but also trapping themselves below ground forever!  Once sealed in, they find that the dragons are robotic and controlled by Multi-Man and company, who have tricked the Challengers into trapping themselves!

But all is not lost, as the Prof rigs one of the robot dragons to serve as a “steam-shovel” and they dig themselves free and after a short battle, the Challenger-Haters are returned to their island prison.  A nifty little story, with a nice twist, but the ending is rushed and not very well thought out.  The art is decent, but not anything you’d write home about, so I’ll only give this issue three (3) out of five (5) Legion Flight Rings!  I’ve always like the Challengers of the Unknown, for some reason, and a lot of people think they were a template for Stan Lee, when he came up with the Fantastic Four, but I don’t really think that’s true.  Jack Kirby designed both teams and both started out in jumpsuits, rather than proper costumes, so that might have something to do with the comparisons!