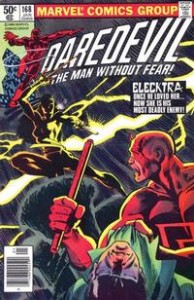 From Marvel Comics, cover dated January 1981, comes Daredevil # 168.  It sports a cover drawn by Frank Miller and Klaus Janson and features a shadowing female figure poised above our hero, Daredevil.  The caption on the cover reads; “Elecktra, once he loved her …now she is his most deadly enemy!”  Well, except for misspelling her name (the actual spelling is; Elektra), it makes for a pretty exciting set-up and definitely made you want to pick up this comic and see what that was all about!

Frank Miller had taken over the Daredevil art chores with issue number 158, almost two year previous, but with this issue, he also assumed the writer’s role on Daredevil.  The book was being published on a bi-monthly schedule at the time, or every other month, if you prefer!

As our hero is about to secure certain information from Turk, regarding the where abouts of another man, another hood hurls a molatoff cocktail at them.  Daredevil is forced to save himself, as well as, Turk.  Again, rather ironically, Daredevil then secures the needed information from the back-up hood, rather then from Turk!

It’s at this moment that we meet the woman on the cover, dressed in form fitting red spandex!  She swoops in, and catching Daredevil completely by surprise, manages to overcome him with only a couple of blows.  Daredevil is groggy, but overhears the woman state that she is out for the bounty on the same man Daredevil is searching for!  And to the surprise of Matt Murdock, and the readers, he recognises her voice!

This triggers a seven page flashback sequence that reveals, that before there was Karen Page, and before there was Natasha Romanoff, there was … Elektra Natchios!  Matt and Elektra met while in college.  Matt was nineteen, and going to law school at Columbia University and Elektra, the daughter of a Greek diplomat, also attended, taking political science courses.  She was protected by bodyguards and her father, but Matt found a way to woo her, and for a year they were in love!  Until the day Matt went to meet Elektra on the steps of the Administration Building, only to find that Elektra and her father were being held hostage!

Matt covers his face with a scarf, he had bought Elektra for her birthday, and secretly enters the building to rescue Elektra and her father.  Unfortunately during the rescue, one of the men, who had kidnapped Elektra and her father, falls through a window and the police think that the hostage takers are killing hostages, so they open fire, killing Ambasador Natchhios by mistake!  Elektra does not take his death well, and she leaves college, Matt, and America, to return to Greece.  Matt’s heart is shattered, but now years later he remembers it all, at the sound of her voice.

Miller did an excellent job of “ret-conning” Elektra into Daredevil’s past and makes the story work well, within the issue’s current storyline.  Elektra has become a bounty hunter, trained in Europe and now returned to America!  Elektra gets the information that Daredevil was seeking  from the original hood, and Matt has to find the same information from other sources.  But ultimately they both end up at the same location.  Elektra battles Eric Slaughter’s hoods, showing off her martial art skills, but is struck down by a tranquilizer dart.  It’s at this moment that Daredevil makes his entrance and saves the day!  In doing so, he reveals his identity to Elektra!  They kiss, and the last panel shows Daredevil walking away from her, and Elektra, hunched over, crying for missed opportunities!

Maybe a little sappy, but the story, and particularly the ending, packs quite an emotional punch for a comic book!  Therefore, I give it five (5) out of five (5) Legion Flight Rings!  This comic is proof that Frank Miller was a comic genius and deserves the accolades he has received over the years.  The man knows how to tell a story, within the comic format, and this issue introduces and provides the origin of a character that made Marvel Comics a lot of money!  Remember the Elektra movie from 2005, starring Jennifer Garner?  Though she first appeared in Marvel 2003 Daredevil movie, starring Ben Affleck.