Welcome back to another Retro Review!  This week I’ve brought up from the comic book vault; Demon Hunter # 1, from  Atlas/Seaboard Comics.  It’s actually the one and only issue published, as the second issue never saw the light of day, as Atlas Comics collapsed only months after this first issue was published!  But that doesn’t mean that this issue isn’t worth collecting, no sir!

Let’s jump right in and take a look at the cover, as drawn by Detroit born creator, Rich Buckler: 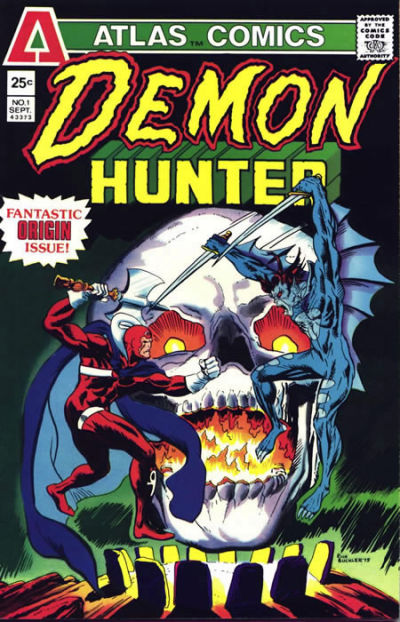 Buckler first broke into comics in 1971, doing various jobs at D C Comics,  In 1973, he moved over to Marvel Comics, where he also provided various artwork for a variety of books.  Then he was given the chance in 1974, to draw The Fantastic Four.  He stayed on the FF title for two years. During this period, Buckler was known, as well, for his original creation, Deathlok. Other notable work from this period includes his collaboration with writer Don McGregor on the Black Panther series in Jungle Action.  And also during this period, Buckler hired the young George Perez as his studio assistant.

But back to Demon Hunter.  The story in this issue is entitled: “The Harvester of Eyes!”.  It was conceived, plotted and both pencilled and inked by Rich Buckler, with the actual scripting being provided by David Anthony Kraft.  One other neat fact is that the story is dedicated to “Buck Dharma and the boys” on the splash page!  And who is Buck Dharma and the boy?  Well that’s a reference to the band, Blue Oyster Cult, who inspired the creation of the Demon Hunter and the Harvester of Eyes!  You might be familiar with their massive hit; (Don’t Fear) The Reaper from 1976!

The book begins with these words: “What does a Demon Hunter do?  Everything he can – to prevent xenogenesis – the rebirth of a demon race here on earth!  His name is Gideon Cross.  He is a telepath.  And he is more!  As a Harvester of Eyes for a mysterious cult –  he has been endowed with certain powers – among them, a shadow cloak that materializes arcane weaponry from the beyond!  Yet he is but one man – fighting alone – against all the demons in Hell – and on Earth!”

With that explanation, the book opens with the Demon Hunter preventing a murder by a sniper of the man, Gideon Cross works for!  Next up is a flashback to Cross’ past and how he gains his powers.  Then we get to see the Demon Hunter face off against a blue-skinned Demon, who has been sent by the cult, to kill Cross.  Cross defeats him only to find out he isn’t actually a demon at all, simply another Harvester of Eyes, like himself!

Cross returns to “The Dark Retreat”, the secret sanctum of the Harvesters of Night and we get another flashback to his first trip there.  This time he witnesses a human sacrifice and the summoning of the Astaroth, Grand Duke of Hell!  And he vows to hunt down and destroy every demon on Earth and destroy the cult that gave him his powers!

Not a bad first story all in all.  It’s a little complicated and Buckler’s art is not his best.  I think he could have used a better inker, actually.  I don’t think his own inking helped his pencil work.  But with that said, I would have liked to see additional stories of Demon Hunter, but that was not to be, with the closing of Atlas/Seaboard Comics.  Or was it?

Actually, Buckler took his creation back to Marvel Comics and with a slight name change, became Devil Slayer!  This character first appeared in Marvel Spotlight # 33 (April 1977), and was a man named Eric Simon Payne.  This character appeared in a number of Marvel comics through the years, but after the Spotlight appearance he was soon seen in Defenders #s 58 through 60 (April – June 1978).  Here’s the Marvel Spotlight cover: 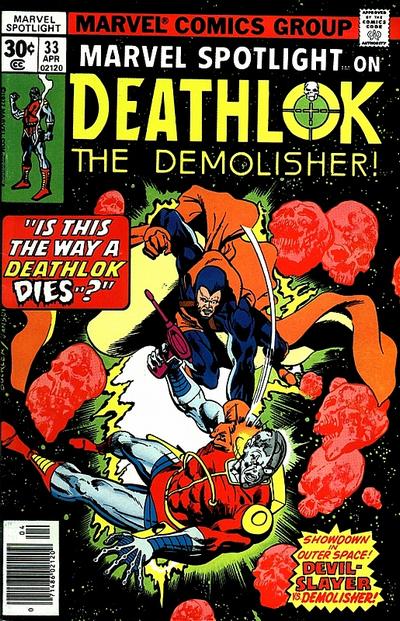 But Buckler wasn’t done, oh no!  He put out a self published magazine by the name of; Galaxia Magazine in June 1980 and who should it feature?  That’s right, another new character, Bloodwing, who just happens to look exactly like Demon Hunter, well the costume has some slight changes, but the character is named; Gideon Cross, so there really is no questioning that it’s the same character!  And here’s that cover: 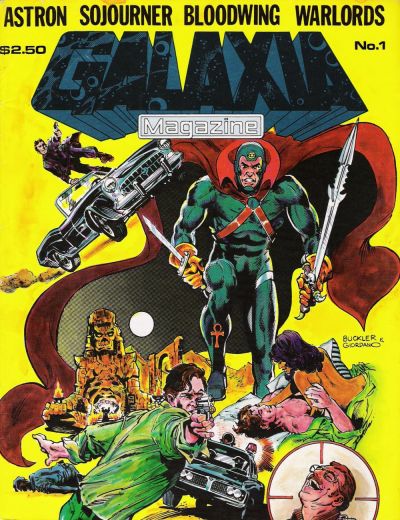 So one way or another, Demon Hunter is the hero that won’t die!  In fact, Marvel has continued to feature him in stories since the seventies, most recently in the mini-series; The Dead of Night from 2008, which starred a new Devil-Slayer, a man named Danny Sylva, who is the great-nephew of Eric Payne, the original Devil Slayer. This series was written by horror novelist, Brian Keene with art by the terrific, Chris Samnee.

Hope you’ve enjoyed my recap of Demon Hunter!  Til next time … be seeing you.