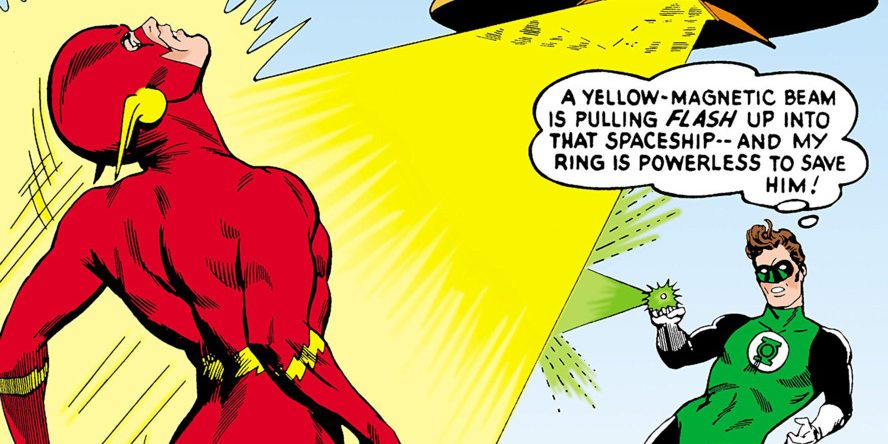 Here is the second in a series of retro-reviews of Silver and Bronze Age comics for the Back To The Past Group Blog.  This one is DC’s The Flash # 131, cover dated September 1962.

Why this comic, you ask?  The simple answer is that I just picked it up this past Wednesday, at the BTTP festivities of December 30th!

This is the second of the ‘famous’, or at least very collectable Flash / Green Lantern team-ups.  The first being in Green Lantern # 13, cover dated, June 1962.  This comic is written by John Broome, pencilled by Carmine Infantino and inked by Joe Giella and is entitled; Captives of the Cosmic Ray!

The story begins with Barry and Hal hanging out on a park bench.  They get up and go to a department store to buy arrows so they can compete against each other in archery, as they are attempting to see which is the better “weekend warrior”.  Hal has topped Bary in golf and billiards and Barry has beaten Hal in tennis and swimming, prior to the opening of the story.

But before they can determine the outcome of their “contest of sportmens”, a flying saucer appears and after our heroes change to their alter egos, aliens capture the Flash.  Green Lantern is forced to follow them to a far off planet, where the two heroes battle an alien.  The twist is that they were removed from Earth so that the aliens could conquer the Earth in their absence.

After defeating the alien, they return to Earth only to have to submit to the conquering race of Myrmiton’s, who threaten to destroy the earth with a cosmic death ray!!!  They force Green Lantern to give up his power ring and they take away the Flash’s super powers via their cosmic rays.  Of course, the Flash out-thinks the Myrmiton’s and saves the day with a little help from Green Lantern and his restored power ring.

Then the story ends with Hal and Barry completing their contest, with each trying to let the other win and finally declaring neither a winner, much to the surprise of Iris West and Carol Ferris!

I give this comic four (4) Legion Flight Rings out of Five!