Bonjour, and welcome back to this week’s installment of Greg Turner’s RETRO REVIEW.  This week I present, from D C Comics, cover dated January 1965, 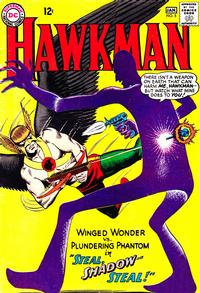 Hawkman # 5.  First off, it has a great cover, pencilled and inked by Murphy Anderson, showing Hawkman battling the Shadow Thief against a yellow background that really makes the two antagonists really jump off the cover.  The cover also exclaims; “Winged Wonder vs. Plundering Phantom in Steal, Shadow, Steal!” in wonderful alliteration.

The story opens with Carter Hall and his wife, Shiera, our favorite Hawk super-heroes in their civilian identities, visiting a wealthy jewel collector, who is donating his lifetime collection of “jeweled masterpieces”!  Hey if you don’t like those words, blame writer, Gardner Fox.  The man opens his vault door only to find the Shadow Thief already inside stealing his collection.

The Shadow Thief finishes gathering up the jeweled pieces and calmly walks through the collector and the Halls!  Yep, that’s right, I said through them, as that is one of the powers of the Shadow Thief.  Cater rushes after him and quickly changes into his Hawkman fighting togs, which he happened to have compressed in a medallion, which he obviously was wearing under his clothes or kept in a pocket, out of sight!  I don’t recall that ever being used much in the series.

Hawkman faces off against the Shadow Thief and just when it looks like he’s got the upper hand on him, Hawkman attempts to use the Shadow Thief’s own weapon against him, only to have it blow up on him!  Hawkgirl appears at this moment and sees Hawkman fall to the ground after the explosion, but gives chase to the criminal.  The Shadow Thief jumps into a pool and appears to dissolve away, thus making good his escape!

Hawkgirl then takes Hawkman up to their orbiting spaceship.  Yes kids, Hawkman and Hawkgirl are really alien policemen from the planet, Thanagar, here on earth to study the ways of the Earth’s police.  But don’t worry, thy’re on our side!  Hawkgirl tends to Hawkman’s injuries and Fox uses the next couple of pages to recap Carl Sands, aka the Shadow Thiefs origin, from his first appearance in The Brave & The Bold # 36, from July 1961.  Fox then gives us a glimpse into The Shadow Thief’s plans and how he intends to defeat Hawkman and Hawkgirl in their next encounter!

Once again the Shadow Thief appears and Hawkman and Hawkgirl spring into action!  But this time the Shadow Thief gains the upper hand and he captures them both, attaching a dimensiometer (the gizmo he uses to appear as a shadow) to both of the Hawk’s wrists.  They are immediately changed to shadows and their bodies switched into another dimension, where Carl Sands waits and uses a beam to freeze their atoms, so they are unable to move.  Thus the Shadow Thief manages to immobilize both their real and shadow selves!

In the other dimension he places their shadow selves into cages hung from the ceiling of a laboratory, alongside the, also frozen, alien Thar Dan, who originally gave Sands the dimensiometer as a reward for saving his life.  On Earth, their bodies remain frozen fifteen feet in the air. The Shadow Thief embarks on a massive stealing campaign on Earth, but Thar Dan “tells” the Hawks that being frozen allows them to communicate telepathically over a limited distance.  Again, don’t ask why or how, it’s a Silver Age DC comic book!

With this knowledge, Hawkman telepathically talks to a nearby bird on Earth and uses him to summon a great hawk, Big Red, to aid him.  But didn’t Hawkman have this power all along?  Through a bit of a mix up with the police, who try to keep the birds away from the floating Hawks, Big Red grabs a mynah bird and takes him to Commissioner Emmett, and Hawkman uses him to talk to the commissioner.  Thus the police allow the birds to move Hawkman’s Earth body, thus also moving his shadow body in the other dimension, thus allowing him to gain his freedom!  Wow, that took longer to expalain than to read in the actual comic book!

Anyway, Hawkman and Hawkgirl escape the Shadow Thief”s trap and with the help of the alien Thar Dan, they create weapons to overcome the Shadow Thief, which they quickly do, in just a couple of pages, once their bodies are once more free on Earth.

The story by Fox is a bit complicated, but never the less, a lot of fun and the art by Anderson is excellent!  I give it four (4) out of five (5) Legion Flight Rings! 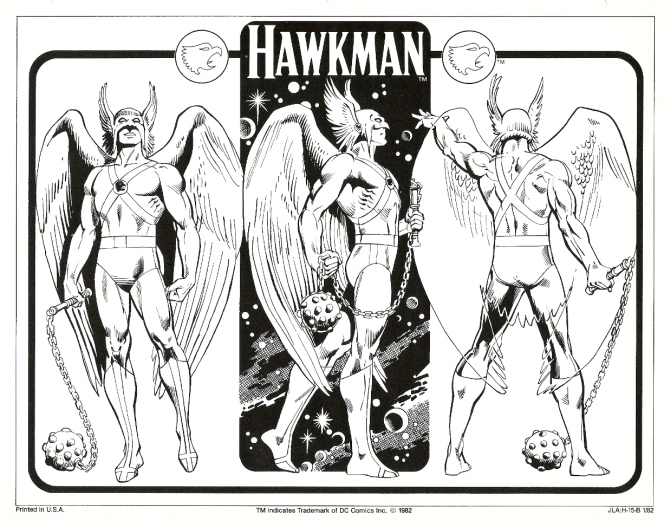