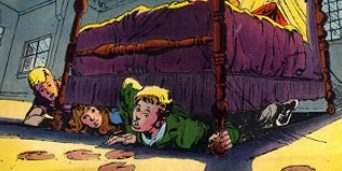 Hi kiddies … This is Greg Turner, your able caretaker of the RETRO REVIEW column!  Come on in … I’m gonna tell you a story about this li’l comic book, published by DC Comics, called House of Mystery # 178!  It’s cover dated February 1969, though technically it would be Jan. – Feb. 1969, as the comic was being published every other month at that time.  It would have been on the stands around September/October of 1968.

It’s got a nice Neal Adams cover of some kids hiding under a bed in what looks to be an abandoned house, of mystery, you might say!  Take a look: 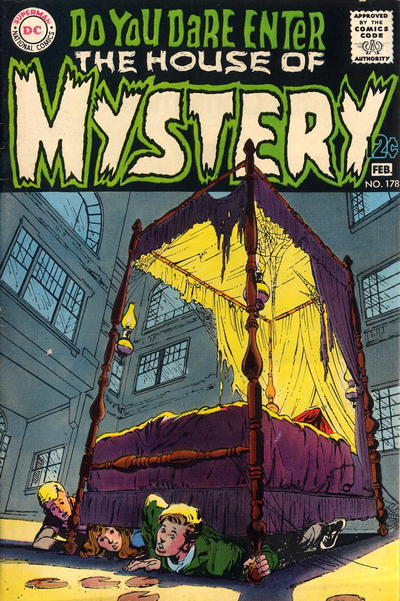 And as you know by now, dear readers, I am definitely a Neal Adams fan!  The book entitled; House of Mystery had recently shifted gears and transformed from a super-hero book which once featured J’onn J’onzz, the Martian Manhunter, and immediately previously; Robby Reed, the Hero of the strip Dial H for Hero to a mystery format edited by long time DC editor; Joe Orlando.

This change had taken place with issue #174.  I unfortunately do not own the first three issues of the new mystery format, but I do know the first cover was drawn by Joe Orlando, himself.  Then he secured Neal Adams as his cover artist.  Neal did the covers on the book from issue # 175 through issue # 192 and then a couple more before issue # 200!

But with the issue I’m reviewing, Neal steps in and provides not only the cover, but a seven (7) page story within issue # 178!  So let’s delve in, shall we …

As I said the cover is nicely pencilled and inked by Mister Adams, as you can also see above.  When you open the comic, you eyes fall on the title or splash page.  This is actually done by Joe Orlando and features the host of the House of Mystery; Cain.  Orlando has his host seated by a fire with his pet gargoyle!  And Cain’s dialogue introduces the first story, entitled; “The Game”, spelled out in the flames of the fireplace!

The reader turns the page, and is immediately tossed into the game, which is written, pencilled and inked by Neal Adams!  We meet Jamie Markus, a young man leaving a birthday party where he has won “the game” as a prize.  His father can’t pick him up, so he must cross the valley on foot. While returning home, a storm comes up and Jamie is forced to seek shelter in the “old Unger house”.

He is not suppose to go near the place, but he is forced to do so, because of the unexpected storm.  Upon entering the house he finds it empty, and totally devoid of furniture, except for a canopied bed!  WHile checking the house out, he hears someone and Jamie hides under the bed, the only hiding place he can quickly find.

Jamie hears footsteps, which approach the bed, and he feels someone get into the bed.  Jamie decides he must let the person know he’s there, so he climbs out from under the bed and opens the closed canopy, prepared to apologize, but he gets the surprise of his young life!  For he sees a person who looks exactly like himself!  Jamie explains that he took refuge from the storm and asks if he can stay until the rain lets up!  The owner of the house says no and says Jamie must leave at once!

Just before Jamie turns to leave, the owner asks what Jamie is carrying.  He explains that it is a game, a word game.  Before you know it Jamie and the young owner are immersed in the game and hours have passed.  Finally, Jamie wins the game and his look-a-like hides under the covers accusing Jamie if cheating.

It’s at this moment the reader sees a hand reaching in.  Jamie is grabbed and hugged by his father, who has been looking for Jamie all night long. Outside of the bed, Jamie finds that he is not in the old Unger house at all, but on a rain slashed floodplain, with only the canopied bed standing alone!  His father explains that there has been a flash flood and that everything in the valley, trees, houses, everything has been wiped out, all except for the  “cockeyed four-poster bed”!

Jamie tries to explain that he was safe, playing a game with his new friend, but of course, the “friend” is nowhere to be found, though in the last panel there appears cloven-hoofed “footprints” leading away from the bed!  A pretty cool story, with great art!  That Adams guy is not bad, not bad at all!

Next is a six (6) page story entitled; “The Man Who Haunted a Ghost”.  It appears to be a reprint from the fifties, but I am not sure.  In fact, the writer of the story is not known, but the art, both pencils and inks are by Jim Mooney.

Next up is a one pager entitled; “Cain’s Game Room” that is written and drawn by Sergio Aragones.  It contains three, one panel gag cartoons.

And the last story in the comic is entitled; “What’s The Youth?”  It’s written by E. Nelson Bridwell and pencilled by Win Mortimer and inked by George Roussos.  It opens with Harvey Bellows, running through the forest, in search of an old shack, where an “old biddy” lives!  He eventually stumbles across it, he enters and faces an old woman who looks like a witch right out of Disney!

She offers to kill his enemies, but he states his problem is not hate, but love!  He tells her a story of how a beautiful young girl walked out of the woods near his cabin in the woods, but when he tried to speak to her, she laughed, “a wild musical laugh”, and then ran away!  Every night she would return again and walk by his cabin.  His curiosity aroused, Harvey asked about the girl to people in the nearest town.  No one seemed to know who the girl was, but while in town, Harvey heard about Meg and her charms!

That is why he has come to her, for a love potion!  But no! He realises that he has no way to get the girl to take it from him.  Anyway, he’s not much of a Romeo, anyway.  He’s rather fat, rather bald and rather out of condition!  He thought if he was young and handsome again the girl just might notice and take an interest in him.

Meg sells him a potion for one hundred dollars, with the instructions to only take one sip, which turns him young again, but that it will only last until sun up and that he must not take another sip until sun down comes again!  Harvey races off, and the reader witnesses Meg take a sip of another potion, and the reader sees her transformed into a young and beautiful girl, who laughingly runs off into the forest, on her way to Harvey’s cabin!

I’m not a huge fan of this type of comic book, but being a huge fan of Neal Adams’ work, I’ve just had to add them to my collection and actually they are well worth the price of admission into the House of Mystery!  Oh, if you didn’t know, my opening was a bit of a paraphrase of the Joe Orlando opening dialogue from the splash page of this very issue.  Bonus points if you knew that!

See ya all next week, for the next Fabulous Find … be seeing you!