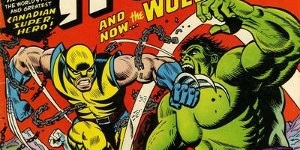 Welcome back for a new RETRO REVIEW.  Anyone following the Back To The Past auctions know that last Saturday, December 13, 2014, we auctioned off a CGC graded, 9.8, Hulk # 181 for over Eighty-two hundred dollars.  So I decided I’d pull out my own copy of that issue and use it for this week’s RETRO REVIEW.  My copy might not grade out at 9.8, but it’s still a pretty nice copy.  I’m not in the grading business, but I’d guess it’s a solid 9.0, or maybe even 9.2.  Not that that has anything to do with this review, I’m just saying!  Here’s the cover: 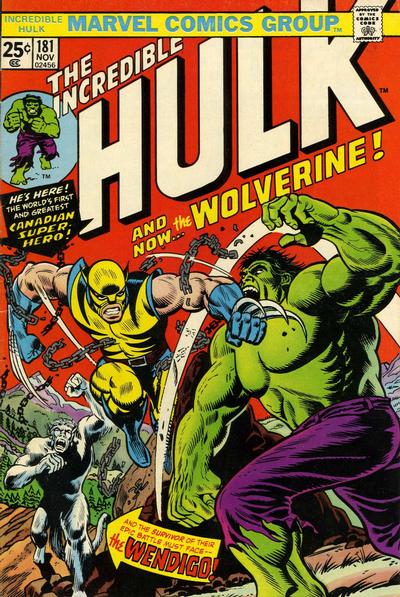 As most everyone knows, a new character was introduced in the last panel of Marvel Comics’ Hulk # 180, cover dated October 1974.  And if you’ve been living on another planet since then, I guess I’ll let you know that the character is/was; Wolverine.  So technically, he made his first appearance in number 180, which looks like this: 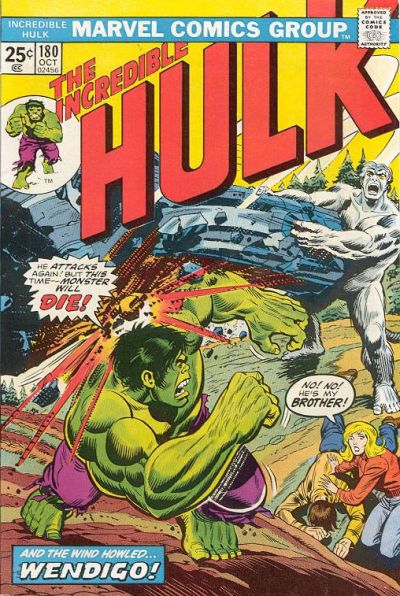 And that very important panel, well, since I’m generally considered a pretty good guy, I’ll show that to you, as well, though this post is heavily ladened with pictures early on and will be woefully shy later on.  Oh well, deal with it!  Here it is: 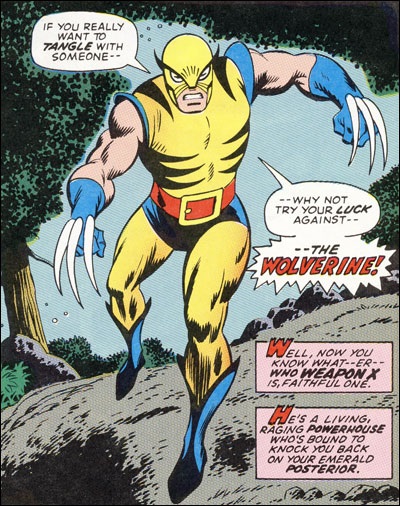 The cover to Hulk # 181 is both pencilled and inked by Herb Trimpe, with some alterations done by John Romita Sr., at least per the internet.  I suspect that those alterations had to do with the Wolverine figure, rather than the Hulk figure.  The title to the story, as it says on the cover is; “And Now … The Wolverine” and per the cover also, he’s being billed already as; “the world’s first and greatest Canadian super-hero!”  How right, as history will prove.  The writer of this comic is Len Wein, who gets credit for creating Wolverine.  Herb Trimpe provides the pencils on the story, and the inks are supplied by, Jack Abel.

The comic opens, where the previous issue had left off, with the Hulk battling the Wendigo, when the Wolverine appears.  Back in 1974, there was just one Wendigo.  Apparently that has changed, as I read a recent Marvel comic where a whole town, if not a whole Providence, turned into Wendigos!  The Wolverine joins the Hulk, and they battle the Wendigo together, over five (5) pages.  When the Wendigo is defeated, Wolverine turns on the Hulk.

Meanwhile, the scene shifts to Marie Cartier and Georges Baptiste, who drag the Wendigo away from the battle site.  Marie is the person who has  lured the Hulk to Canada, and it is her brother Paul Cartier, who has become the Wendigo.  She is a mystic who believes she can transfer the Wendigo curse from her brother to the Hulk using black arts.

She releases a gas, that knocks out both the Hulk and Wolverine.  But with the Hulk losing conscience, he transforms back in Dr. Bruce Banner.  It is at this point that her accomplice, Georges turns his back on Marie, and her plans, and leaves, saying he has had enough and can go no further with her plans.  He returns to where Paul made the transformation into the Wendigo.

Yet again, meanwhile, Marie chains up Wolverine and she begins to drag Dr. Banner to her mystic site, where she has left her brother.  As she drags Banner, he awakens and transforms back into the Hulk!  Marie tries to convince him that she is his friend, but he only wants to finish off the now chained Wolverine.  Again the two heroes join in battle and Marie races off to find George and her brother.  Shortly, she finds her path blocked by the Wendigo.  She screams and the Hulk knocks out  Wolverine, while he is distracted by Marie’s scream.

While that is happening, the Wendigo has revealed that he is not her brother, Paul.  Marie finds her, now changed back to normal, brother, where she left him, and realizes that the Wendigo must be Georges.  The Wendigo speaks and reveals that he has switched places with Paul, not out of obligation or debt, but because he loves Marie.  It may not have been speech, but a mental telepathy of some sort.  He then shatters a wall and leaves Marie, crying out for him to come back, come back.

The comic is over but for the last page, which shows the Hulk showing Marie some compassion, as he tries to soothe her hurts and Wein ends the tale with these words: “So they stand together, the monster and the girl — both victims of circumstance they could not hope to control — and both of them so terribly, terribly alone.”

Not the happiest of endings in this particular comic, but with the creation of the Wolverine, who will go on to be pretty popular and a very valuable property, a pretty happy day for Marvel Comics!

Where is the best place to sell my old comic books?

That’s it for this week’s RETRO REVIEW.  I hope you enjoyed it and please come back next week for a new Fabulous Find.  See ya then …