In today’s RETRO REVIEW, I would like to bring to your attention, The Incredible Hulk # 140 from Marvel Comics.  This comic is cover 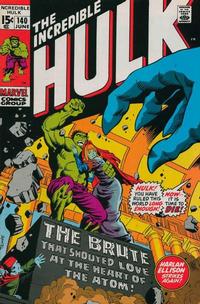 dated June 1971 and features a nice Herb Trimpe cover.  Personally, I don’t think Trimpe ever got all the credit he deserved for drawing the Hulk for as long as he did.  His art was never a fan favorite and yes, it wasn’t ‘flashy’ by any means, but it was nicely done and very serviceable!   In my opinion, he was one of the unsung heroes of Marvel Comics during the late Silver Age and early Bronze age!  He, along with, Marie Severin, deserve kudos for their excellent Hulk work!

The Incredible Hulk story in this issue actually began in Avengers # 88, but you really don’t need to own that story, or even really know about it, to enjoy this issue of the Hulk!  In the Avengers lead in, the Hulk is being pursued by the Mighty Avengers, only to be captured by a villain, by the name of Psyklop!  Who intends to “shrink and compress” the Hulk for closer study.  As the villain bathes the Hulk in his shrink ray, the Avengers bust in on the villain.  All this is nicely recapped on the splash page of The Incredible Hulk # 140 and leads to a story by Harlan Ellison, with an adaptation by Roy Thomas.  The art is laid out by the afore mentioned Herb Trimpe, with final art provided by Sam Grainger and the comic is lettered by Marvel stall worth, Artie Simek!

The story is entitled; “The Brute That Shouted Love At The Heart Of The Atom!”  The second page shows the Avengers battling Psyklop, while the Hulk shrinks down, until he emerges gigantically in another world, only to continue shrinking until he again shrinks out of sight of that molecular world and into yet another!   In the mean time, Psyklop manages to break free from the Avengers and he teleports them onto a New York subway platform with no memory of where they have been.

The Hulk finds himself “like a bug in the grass” on the shore of a lake, or maybe it’s just a pond, where he is threatened by a warthog like creature.  The Hulk overcomes the creature and sets out to explore the world he finds himself in/on.  He leaps away under the power of his might leg muscles and soon comes across a city.  The city is being attacked by many of the warthog like creatures and the Hulk wades into them and quickly overcomes them all.  It is at this moment that he hears what sounds like people screaming, only he soon discovers that the people aren’t screaming, they’re cheering the Hulk!

He enters the city to find that the inhabitants are green in color, like himself, and he is brought before Queen Jarella.  Though they can not understand each other’s language, some things, i.e. actions, “speak a trans-universal language” as Jarella reaches out her hand to the Hulk and he takes it!  She takes him to see three sorcerers, who use their great powers to enable the Hulk to understand and speak their language and “Shazam” he understands!  Roy Thomas actually uses the word Shazam and attributes it to Billy Batson.  A nice little nod toward D C Comics, who owned the rights to Billy Batson and the original “Big Red Cheese”, Captain Marvel.

What is a surprise is that the process has not only enabled the Hulk to understand and speak the micro-world’s language, but has given him access to Bruce Banner’s mind while in the Hulk’s body!  Bruce/Hulk joins the Queen’s side as consort, and looks forward to the day when he will become her king, proctector and husband!  But things are not as they should be, as there is a plot afoot to kill the Hulk and Queen Jarella, by other’s in the palace!  That very night, the Hulk is attacked by assassins, but they are stopped by the Hulk and he goes in search of their leader.  The Hulk has him exiled into the wilderness and announces his plans to marry Jarella.

Of course, it’s at that very point that the giant hand of Psyklop reaches into the micro-world and snatches the Hulk and away from Jarella and her world.  He enlarges the Hulk once again in his laboratory.  As he grows the effect of the sorcerers’ spell wears off and the mindless Hulk returns and easily defeats Psyklop.  But his memory of Jarella, and her world, as well as, the happiness that he has experienced there, also fades from his memory, wrapping up this moving, yet bittersweet, Hulk tale.

I have to give it four (4) out of five (5) Legion Fight Rings and I highly recommend this issue to any comic collector!