Happy Friday to all my regular readers!  This week I’m still going through Marvel Comics’ Marvel Premiere series.  And today, that brings me to Marvel Premiere # 15, featuring Iron Fist!  The comic is cover dated May, 1974 and has a nice Gil Kane and Dick Giordano cover.  The comic provides the reader with the first look, as well as, the origin of a new character, Iron Fist!  And here’s that cover: 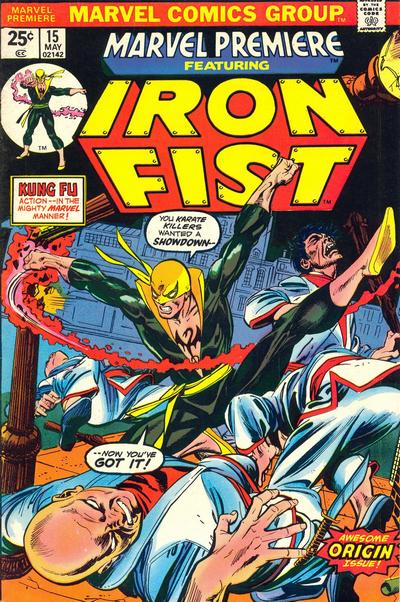 Likely the character was created by writer Roy Thomas and penciller Gil Kane to latch onto the martial arts popularity of the early seventies.  The comic was written by the afore mentioned Roy Thomas and like the cover, the interior artwork was provided by Misters Kane and Giordano.  This was actually one of the rare appearances that Dick Giordano made within the pages of a Marvel comic book, as he was known more for his work at Charlton Comics and D C Comics.

Iron First, who is really Danny Rand, appeared in nine issues of Marvel Premiere, issues 15 through 25, before moving to his own title.  A little known fact was that Thomas based Iron Fist on Bill Everett’s Golden Age character, Amazing Man which appeared during the 1940s!  Iron Fist also ran in Marvel’s black and white magazine; Deadly Hands of Kung Fu, beginning with issue number 10.  And many of you may remember after his book was cancelled, Iron First moved into Marvel’s Power Man #s 48 through 50, where he was teamed with Luke Cage.  In fact, Power Man was renamed with issue # 50 to Power Man and Iron Fist.

But back to his original appearance in Marvel Premiere # 15.  The book opens with Iron Fist facing his last tests in his K’un-Lun training.  These tests are physical rather than written or book tests!  During his next to final battle, he thinks back on how he came to K’un-Lun and the death of his father at the hands of his friend and business partner, Harold Meachum along the way.  We also see in flashback, the sacrifice of his mother which enables Danny to reach K’un-Lun while he is facing his final exam or final battle.  This test is against a Robot, who fires knives out of the palms of his hands.

By summoning the power of the Iron Fist, Danny overcomes the robot.  He has successfully met and overcome the challenge of many, then the one and lastly the challenge of himself, of his will to live!  As he states; “I stand bloody, but unbowed, never bowed!”

Danny was born in New York City, the son of an American businessman and wealthy entrepreneur.  His parents were searching for the mystical city of K’un-Lun, but died in their attempt, and only young Danny safely made it to K’un-Lun.  To be raised by the kindness of strangers, as an orphan!  But his future was bright, as he gained the power of the Iron Fist and eventually returned to the United States, but those are stories for another time.

I give this comic a rating of three (3) out of five (5) Legion Flight Rings.  It’s a pretty interesting origin story with very nice art! 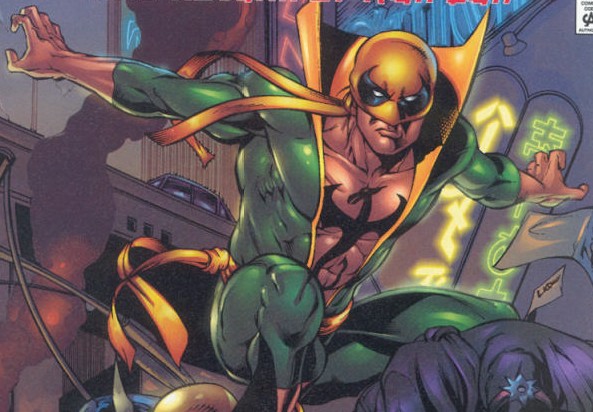