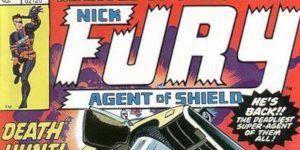 Today, let’s turn back the clock forty-three (43) years to 1976, for this week’s RETRO REVIEW, with a comic book cover dated; December 1976.  This comic comes from Marvel Comics and the book in question is Marvel Spotlight # 31.  AS most of my readers know Marvel Spotlight featured and spotlighted various characters that did not have their own sole series at the time.  And this issue features Nick Fury, Agent of S.H.I.E.L.D..

Let’s take a look at the cover that would have been displayed on the book racks or on the comic spinner racks at the time.  Here is is:

The cover artwork was supplied by the team of Howard Chaykin, on pencils and Klaus Janson, who provided the inks.  Per the cover the title of the story is; Death Hunt!  And I love that there is also a blurb that screams; He’s Back!! The Deadliest Super-Agent of them All!  All that and the image itself Nick G+Fury leaping from his flying car with a couple of helicopters shooting at him as he plunges to his presumed death.  Wow, now that’s a cover!  Notice the double exclamation points after He’s Back!!

But once we opened the comic, we find out the actual story is entitled; “Nick Fury assignment: the Infinity Formula!”, maybe not as cool as Death Hunt, but maybe it reveals a little bit more of the story to come.  The story is scripted by Jim Starlin and the interior art, both pencils and inks are by Howard Chaykin.

Things start off with a bang, an actual bang, as the reader witnesses a man being shot to death.  This action takes place in Paris and the killer says; “I think the time’s come for us to make some real money.”

The scene immediately shifts to the U.S. and Nick Fury, where he receives a phone call from someone telling him that Professor Sternberg is dead and that they now have the “Ponce De Leon serum” and his contact in the fuutre will be a Madame Renour!  Nick reflects that this means that his “darkest secret”, not to mention, his life, are in the hands of a killer!

He tells the Countessa that he is leaving immediately on vacation.  He tells her to tell Dugan he is acting head of S.H.I.E.L.D. and that he is going hunting.

As Nick flies to Europe to begin his hunt, he reflects back to World War Two, when he had imprudently stumbled into a French mine field, trying to elude a Nazi patrol and nearly blew himself up.  His injuries were tended by a French doctor, a Professor Sternberg, who not only repaired his physical injuries but injected him with a “pet project” called the Infinity Formula, which Nick was unaware of.  When the was was over, Nick received a package from the Professor with an “inoculator” and a small dose of a serum that the Professor claimed Nick would need.

The next day, when Nick awoke he found he had aged about sixty years.  He had gone to bed a strapping 26 year old man and woke up as a feeble 86 year old man!

It turned out that the Professor had given Nick a longevity serum to help is is recovery and now would need a yearly “booster” to retain his youth!  After this flashback, Nick spends the next two pages tracking down the Professor’s killer.  He eventually track him to Las Vega, where Nick confronts him.  They discuss terms, but in the meantime, the Infinity Formula is stolen yet again by a third party!

Both the killer, Steel Harris, and Nick split up to try to regain the formula and after a running gun battle across Las Vegas, they once again come together to join forces for a better chance to regain the formula.  But once again they fallout and battle each other.  It turns out that they both need the Infinity Formula to stay young, so in essence they are each fighting for their very lives.

Nick eventually comes out on top, but collapses as once again, age catches up to him.  It’s then, that the Countessa comes to Nick’s rescue, with a dose of the formula, as Nick regains his youth, he discovers that it was the Countessa, who stole the serum and the necessary notes which will enable more of the serum to be made, this last time in Vegas.

The story ends with the Countessa helping Nick leave and Nick finally realizing that the Countessa just might be the “gal” for whom a man who may live forever should have.  A sappy ending for a Marvel comic book, but still a nice one!

At the time some readers and fans took exception over Nick using a drug to retain his youthfulness and over the years it became quite an issue.  Pretty much Marvel now ignores this story by Starlin and Chaykin.  But back in 1976 it happened within the pages of Marvel Spotlight # 31!  Don’t believe me?  Well, pick up a copy for yourself if you can find one!

Anyway, hope you enjoyed this look at a controversial story from Marvel Comics back in 1976.  That’s it for this week’s RETRO REVIEW, but look for a new Fabulous Find next week, right here at Back To The Past.