Greetings fellow comic book fans and welcome to another edition of Greg Turner’s Retro Review!  This week I’ll be looking at The Maze Agency # 1 from Comico, the Comic Company.  The book is cover dated December 1988 and features a very nicely drawn Adam Hughes cover.  The book was created by writer Mike W. Barr and it was pencilled by the afore mentioned Adam Hughes.  The ink work was provided by Rick Magyar.  If this wasn’t the first comic book work done by Adam Hughes it was close. 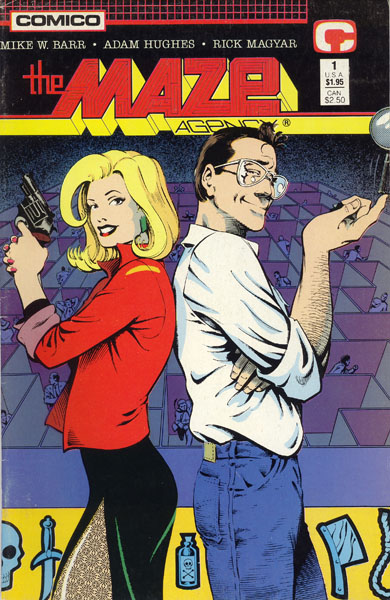 1988 was a pretty good year for comic books and this new book from Comico really stood out on the comic book racks in the fall of 1988.  As I said previously, the concept of the comic came from Mike W. Barr, who actualy came up with the idea for the book during the summer of 1986.  He wanted to write a comic that would feature whodunits, i.e. detective stories, with clues fairly presented to the reader, while the stars of the book solved the mysteries each issue.  A far cry from the usual super-hero books that prevades the spinner racks at the time and even today!

He decided to write and publish a short comic book introducing the characters for two reasons.  The first to have something to show publishers, who might be leary of a non-super-hero book and to copyright and trademark his creation!  That story was entitled; “The Mile High Corpse” and this was reprinted, though for most people it was the first time they got to see this story, in the Maze Agency Special that published by Innovation Comics in 1990.  This initial story was written by Barr, but was drawn by Alan Davis!  Alan also did the character designs for the two main characters that Hughes followed in drawing the comic.

But back to that first issue, the first issue’s story was entitled; “The Adventure Of The Rogue’s Gallery”.  And it was this story that introduced readers to the two main characters, Jennifer Mays and Gabriel Webb!  The story is about a mysterious art thief that steals frames instead of paintings, thus it’s a case for the Maze Agency.

Before I forget, the comic has a wonderful logo, which is made up of an actual maze.  The logo was designed by letterer, Todd Klein and is, as described by Barr; “perhaps the first logo in the history of comics that’s a functional game as well as a masthead!”

The comic opens and the readers are introduced to Jennifer Mays, who runs the Maze Agency.  She is presented with the information that the art thief, The Rogue, is planning to rob an exhibit of paintings ahead of the theft.  She immediately calls in Gabriel Webb and they arrange to met at the exhibit that evening to go over the security arraignments.

That evening, a tuxedo clad Gabriel, and a little black dress wearing Jennifer, attend the opening.  At the premiere, a scene occurs when the artist’s divorced wife appears and claims the paintings are hers until the artist pays off back alimony, thus ending the gala opening!

Webb takes Mays home and the reader discovers that there might be something between the two main characters, but that Jennifer may be recovering from a “lost husband”?  Later in the book it is revealed that the Arthur, that she is apparently grieving for, was a police detective.

Of course that very evening, The Rogue strikes at the gallery!  The guard on duty is shot but manages to sound the silent alarm to Mays’ phone.  Jennifer immediately calls  Gabriel and they rush to the scene of the crime, where they discover that the thief has made off with the frames, but left the paintings!

The middle of the book sets up the fact the Jennifer is the “tough one”, she runs the agency, carries a gun and knows how to pick locks and Gabriel is the “brains” of the operation.  After speaking to the recovering guard, his retelling of the sequence of the events, allow Gabriel to solve the crime!  I won’t give it away here in my retro review, you’ll need to go out and purchase the comic, or dig it out of your collection and re-read the story!

The first issue is a nice introduction to the characters and also a “play fair mystery”, and as such, I give it four (4) out of five (5) Legion Flight Rings!  Actually the whole series is worth searching out and adding to your collection!