Welcome to another Friday!  This week, I’ve pulled out Metamorpho # 2, from D C Comics.  It’s cover dated October 1965 and is the third appearance of a relatively new character.  Metamorpho had first made his appearance just six months earlier, in Brave and the Bold # 57, cover dated January 1965, where his origin was told, by the same team that did his regular series.  And who were this team of writers and artists?  Well, the creator and writer was none other than Bob Haney.  He was joined by Ramona Fradon, who supplied the pencil art and Charles Paris, who inked Ms. Fradon’s pencils!

Here’s the cover to issue number 2: 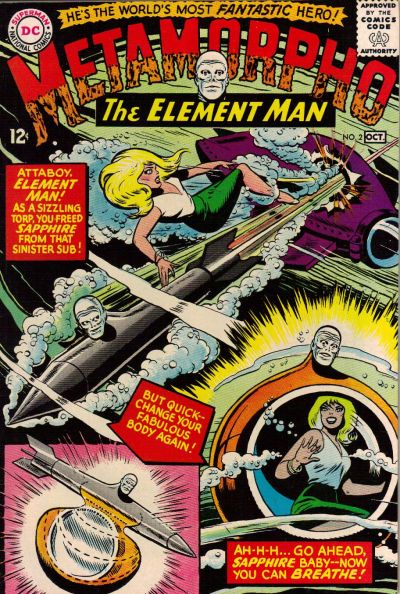 The issue begins with scientist Simon Stagg, working on restoring Metamorpho, who had been destroyed at the end of the first issue via forming himself into an atom bomb and exploding.  Simon’s caveman-like man servant, Java, was also petrified in the blast.  Stagg is successful in both endeavors within the first six pages.  A good thing since the new comic wouldn’t be the same without it’s star, now would it?

But who is Metamorpho?  He is Rex Mason, an adventurer who had been hired by business tycoon, Simon Stagg, to retrieve a rare Egyptian artifact.   And how did he gain his powers?  In an Egyptian pyramid, Rex Mason was knocked out by Simon’s brutish bodyguard, and eventually exposed to a radioactive meteorite, called the Orb of Ra, which transformed him into the Element Man. He gained the ability to shape shift and change himself into any element found in the human body, or any combinations thereof.  Mason also started dating Stagg’s daughter, Sapphire Stagg during his initial introduction within Brave and the Bold # 57.

But back to issue two of his new series.  A mysterious stranger from an also mysterious, U. S. government agency, arrives and enlists Metamorpho’s assistance in getting to the bottom of a worldwide crime wave!  One that the government has discovered originated from a communications satellite orbiting the earth, known as Telstar!

Metamorpho is blasted into space riding a NASA rocket and as he zeroes in on the satellite, he discovers a stowaway!  Yep, it’s Java.  He’s hoping to prove he’s every bit the hero that Metamorpho is, to Sapphire, who he loves.  Then to make things even more complicated, we learn the identity of the “bad guys”, Nicholas Balkan and his son Gunther!  And it just so happens that Gunther has found a picture of Sapphire Stagg in a magazine and declares she is the woman he is going to marry!  What is this a comic book or a soap opera?

The Balkans return Telstar to Earth and capture Rex and Java, using Liquid Oxygen on Rex and simply conking Java on the head.  Simon and Sapphire track Metamorpho to the bad guy’s secret island and are captured, as well.  Java eventually frees Simon Stagg and they both free Rex, who then rescues Sapphire from Gunther.  Using all of his elemental powers he saves the day and the government’s representatives swoop in and take control of the Telstar satellite, as well as, Nicholas Balkan and his son Gunther.

A pretty simple, done in one, story with serviceable art, by a rare, in those days, female artist.  The series only managed to make it to issue number 17 before being cancelled, but I always found the comic to be light but enjoyable.  Therefore, I give it three (3) out of five (5) Legion Flight Rings!  A quirky but short run that you might consider adding to your collection!