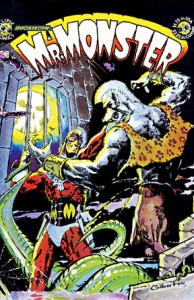 This week I bring to your attention, Mr. Monster # 1, from Eclipse Comics. It’s dated January 1985, but not on the cover for some reason.  This comic features a very nice drawing of our hero battling a werewolf, by creator Michael T. Gilbert on it’s cover.  Mr. Monster is a fanatical monster hater with an extreme attitude!  Gilbert’s Mr. Monster had originally made his first appearance in Pacific Comics Vanguard Illustrated # 7 in 1984.  But actually the character’s roots go back much further than just the year before!

Gilbert actually revived, and totally revamped, a 1940’s character created by Fred Kelly, and who had appeared in a Canadian comic book, Triumph Comics # 31, dated April 1946, from Bell Features.  Kelly’s Mr. Monster was Jim “Doc” Stearne, who was more like Doc Savage, than an actual super-hero in this issue.

Kelly’s Doc Stearne was a psychiatrist, who became interested in monsters and thus acquired the nickname “Mr. Monster” later, when he put on a costume in Super Duper Comics # 3, dated June 1947, also from Bell Features.

Gilbert’s Mr. Monster was actually a hereditary position, passed from father to son, going back to the beginning of days.  Kind of like The Phantom in that regard!   His Mr. Monster was Strongfort “Doc” Stearns who wore the costume and he was  assisted by his “girl Friday”, Kelly Friday!  (A tip of the hat maybe to Fred Kelly?).  But I love the pun as well!  His girl friday is actually named Friday!

With that background in mind, and the fact that the first chapter of this book actually reprints the earlier Vanguard Illustrated # 7 story, “The Case of the Reluctant Werewolf”, in full, Gilbert provides the script and the layouts and William F. Loebs provides the pencils and inks for this book.  The book opens with a werewolf, in a rather loud sportscoat, calling on Mr. Monster attempting to  enlist his help in saving his girlfriend, who is being held hostage by a were-biker group!

Chapter two features a battle between the Were-Devils, the were-biker gang, and Mr. Monster, with a little help from Myron, the sportcoat wearing werewolf.  Mr. Monster overcomes twelve to one odds and kills the head were-biker, Crudlick.  At least he seems to as the chapter closes.

But chapter three, reveals that Crudlick is still alive, due to his deep hatred of Mr. Monster!  Cruklick is about to hand Mr. Monster his own head, when Mr. Monster’s girl-friday, Kelly injects Mr. Monster with a concentrated mega-vampire serum, turning him temporarily into a vampire with the concentrated power of 1000 frenzied vampires!  Needless to say, Mr. Monster defeats the werewolf leader and then reverts to himself.

There’s only one last remaining task, Doc Stearn operates on Myron and implants a device to make him sleep through the full moon, so that he will never be able to harm anyone when he changes into a werewolf at the full moon!  And the story ends with Myron and his girl, Millie, leaving to get married, after first asking Mr. Monster to be their best man at their wedding!

Gilbert’s story is a lot of fun and Loeb’s artwork is moody and brings to mind a little bit of Will Eisner in style!  All in all, an excellent first issue. I give it three (3) out of five (5) Legion Flight Rings.  Its a shame that the series only lasted ten issues, but it is also a fact that Mr. Monster just won’t die, as other adventures have been published by Dark Horse, Tundra, and Image Comics.  And today, the character has just been revived in Dark Horse Presents # 1.  If you hurry, you just might still be able to pick this comic up at fine comic book stores in your neighborhood!  I highly recommend it!