Howdy partners!  And welcome to this week’s Retro Review!  And what’s on the review table today?  How about Marvel Comics’ Nick Fury, Agent of S.H.I.E.L.D. # 3, cover dated August 1968.  And why did I select this particular book?  Good questions!  So let me try to answer that question.  It’s because this issue features a Nick Fury ghost story that just seemed appropriate for Halloween, which is just three days away! 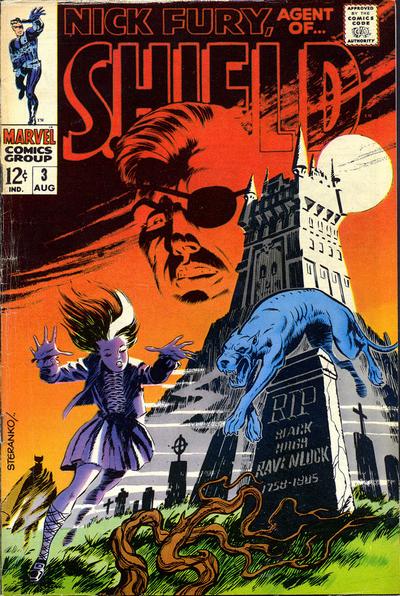 This comic has a very nice, moody cover by artist, Jim Steranko, and in fact the comic itself was written by Jim Steranko, pencilled by Jim Steranko, inked by Dan Adkins and even colored by Jim Steranko.  And as I understand it, Jim also provided the inks on the splash page, rather than Dan Adkins!  The story is purported to be based on a “olde Scottish legend” and is entitled; “Dark Moon Rise, Hell Hound Kill!”  Steranko gives a couple of nods to others with this story.  First is, Sir Arthur Conan Doyle and his Sherlock Holmes tale; “The Hound Of The Baskervilles” and the second is, Joe Simon and Jack Kirby‘s “The Phantom Hound Of Cardiff Moor” from Captain America # 10, from January 1942!

The story opens with Nick Fury in Scotland, in the castle of Lord Gavin Ravenlock, where he has gone to visit a friend, only to find that his friend is dead, killed upon the moors of Scotland!  He is also joined in the castle by three “Ghost Hunters”, their leader, Mycroft, his ward, Rachel, and a Countess Caution!  (What a great name!)  They are there, at the request of Lord Ravenlock, to investigate the “phenomena” going on at the castle.  Exactly what is never revealed.

As the ghost hunters, plus Fury, explore the castle, Nick saves the young Rachel from a falling suit of armor, where he discovers she is blind.  The castle’s caretaker, Angus MacGregor, tells them of the tale of Black Hugh and his Hell Hound. Black Hugh lost his young bride to his brother and he sought revenge on them.  The Hell Hound killed the woman, but Black Hugh was killed by his brother and his ghost is said to still roam the moors at night, accompanied by the accursed hound, searching for his brother!

The ghost hunters perform a seance, where upon Black Hugh appears to them all and attempts to kill Rachel.  Again Fury saves the girl and Steranko provides the reader with a nice swordfight between Black Hugh and Fury!  While this battle is going on, Rachel exits the castle and goes out onto the moors in a trance.  Fury gets the upper hand in the fight and Black Hugh just fades away!

Fury leads the others in following Rachel and once again arrives just in time to save her from a Hell Hound attack!  Fury manages to fight off the beast, but his hands are injured.  While on the moors they discover the body of the current Lord Ravenlock and Fury and Rachel explore the “tower of terror” that is found on the property, while the others take Ravenlock’s body back to the castle.

Rachel leads Fury to a secret passage found through an Iron Maiden, where he discovers the secret of Ravenlock Castle!  Steranko only has Fury explain what he has found, rather than showing the action.  But the bottom line is that Nazis have been using the castle and it’s underground caverns to hide a Nazi submarine, which they have been using to raid ships at sea, as modern day pirates!  In fact, Fury supposes that it’s been sightings of the sub over the years that have inspired the legend of the Loch Ness Monsteer, as Lock Ness is only a few kilometers away!  A pretty neat idea, if I say so myself.

Fury is attacked by Mycroft, who is revealed as the bad guy and his modern day version of a Hell Hound.  It turns out it was Mycroft, in the guise of Black Hugh that had attacked Rachel in the castle earlier.  Fury manages to trap both Mycroft and the hound in the “tower of terror”, above the secret sub lair.  But wrapping his story up, Nick tells that he has “crossed a couple of their fuel mixture lines and turned their sub into a floatin’ bomb!” that explodes off camera!

The final surprise is that Rachel is actually the lost daughter of Lord Ravenlock and she will now inherit the castle, as well as the title.  This wraps up the issue with Nick strolling off arm in arm with Countess Caution.

Certainly not your normal super-hero tale, but a nice yarn nevertheless!  A cool story with terrific art, therefore I give it four (4) out of five (5) Legion Flight Rings!  See you all next week, “God willing and the creek don’t rise”!