So I’ve been on vacation, did you miss me?  Well I missed you!  And now that I’m back, it’s on with the show!  This week I’ve unearthed The Omega Men # 3, dated June 1983, from D C Comics.   It’s got the introduction of a couple of new characters, including one that will make quite a splash in just a few years, but this here’s his first appearance, so you just might want to search out this issue and add it to your collection!  And who am I talking about?  Well, you’ll just have to keep reading to find out!

The Omega Men is a relatively new series from DC, and this only their third issue.  Though the main Omega Men characters had been previously introduced in another DC Comic, Green Lantern, issues 141 – 144 created, written and drawn by Marv Wolfman and Joe Staton.  But that’s a RETRO REVIEW for another day!

The cover is drawn by Keith Giffen and Mike DeCarlo and features a unknown character flying through space with a captured Omega Man, Kalista.  The cover copy reads; “Kalista — Prisoner of the Citadel!”, but the interior story is entitled; “Assault On Euphorix!”  The story is written by Roger Slifer with art by the aforementioned; Keith Giffen and Mike DeCarlo.  Of note is that the editor is none other than the Omega Men’s creator, Marv Wolfman! 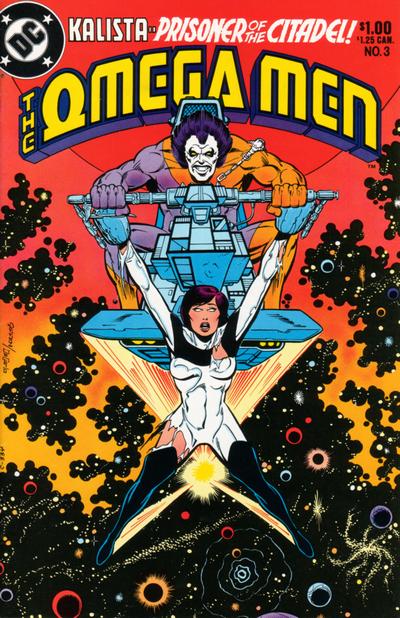 In a nutshell, the story involves Kalista being tricked into believing that the Citadel, the villains of the book, have invaded her homeworld of Euphorix, she takes a group of Omega Men to try to stop them. When they arrive, they are boarded by two bounty hunters and Kalista is captured by them.

Okay I’ve made you wait long enough, one of those bounty hunters, is Lobo!  Yep, that’s right, Lobo, who will go on and become a favorite character of many fans throughout comic fandom!  I’m not really sure why exactly.  I’ve never liked the character myself, but I understand that Lobo is Stan Lee’s favorite DC character!  Hard to believe, but I read that somewhere.  And who knows, I may be continuing to pass along false information, since I’ve never asked Stan Lee who is favorite DC character is, and we all know he won’t ever name his favorite Marvel character, though most fans believe it’s The Silver Surfer!  And Stan didn’t even create him, Jack Kirby did!

And since this RETRO REVIEW seems to be more about individual characters, this time around, than the issue itself, I also want to tell you about another “one-shot” character introduced in this issue, the Omega Man, Humbek!  Take a look at page fifteen,from issue # 3: 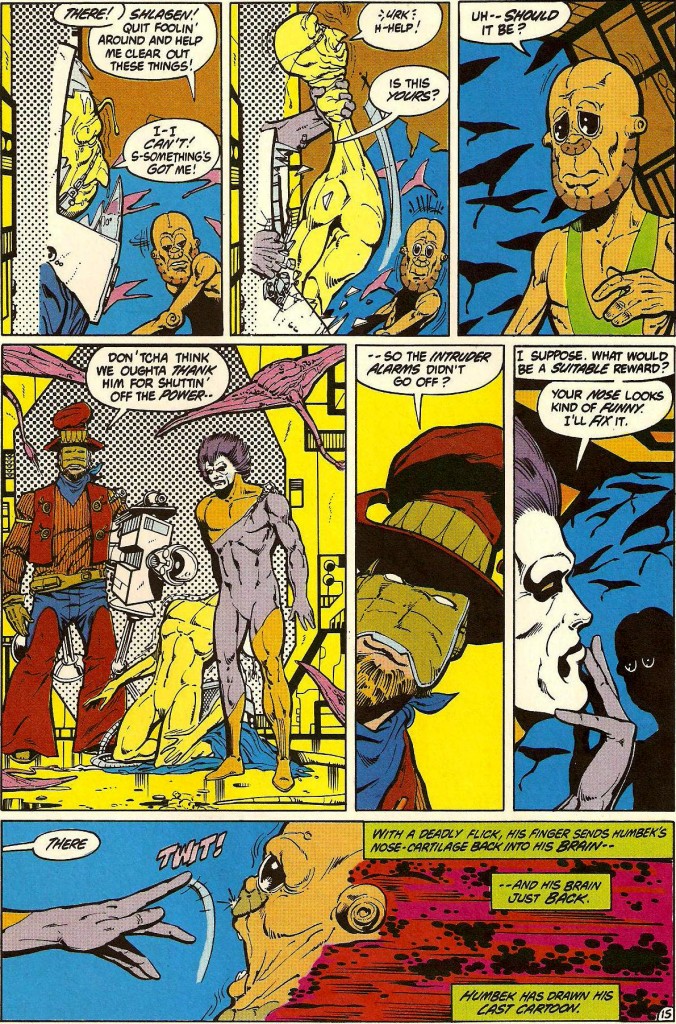 Now take a look a look at the fan artist, Fred Hembeck’s self portrait: 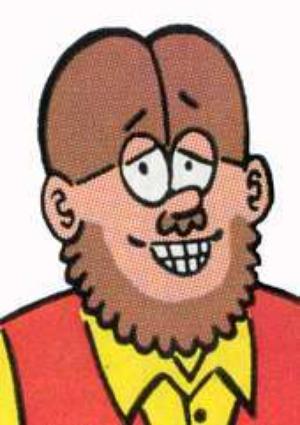 And you’ll all agree, that Slifer and Giffen drew in cartoonist Fred Hembeck into the Omega Men, as the character, Humbek, only to have Lob0 kill him off on page 15!  It’s one of the cool “in-jokes” often found within comic stories, if you know where and when to look for them.