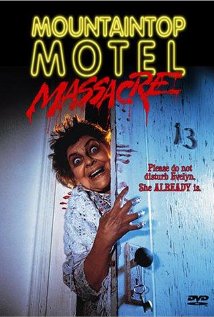 Do me a favor and run this scenario through your head. You’re at your favorite restaurant and you’re looking for something new to try. You pick up the menu and begin to peruse it for something that looks good. You happen to find something that looks AWESOME. You order and it you’re giddy with anticipation. There’s no way this can suck. It gets set in front of you and you get your first taste. At that moment you realize you’ve just been hornswoggled. You were lured in with false promises and left with bitter disappointment. Such is Mountaintop Motel Massacre.

With a title like Mountaintop Motel Massacre, this movie was either going to be legitimately awesome or so bad that it ended up being awesome. The most frustrating part is that it had the potential and ingredients to be a “good bad” classic, but it just sucked. It was like when someone shoots off a firework and it doesn’t blow up. Or when you spend 20 minutes at the zoo yelling at the rhinos to gore something and they do the second you turn around because you’re distracted by the damn free range peacocks they let wander around like they run the joint.

Mountaintop Motel Massacre is about a crazy broad named Evelyn that runs the Mountaintop Motel. A few years back she was in an insane asylum, but she gets released and resumes the running of her business. This is where the movie starts. Within the first 15 minutes Evelyn is driven to insanity again, thus beginning the titular massacre. A plethora of guests stop to book a room at the motel, only to end up in quite a sticky situation. The only guest I found entertaining was Al, who is a giant scum bag. He was hilarious, but not anywhere near funny enough to make him being the only entertaining character acceptable. The story is generic, the kills and effects are middle of the road to bad and there really isn’t a reason to revisit this, or visit it for a first time. The best parts of this movie are the title, poster and tagline. The fun stops there. This movie was made in 1983, but didn’t get released until 1986. That should tell you something.

I’m sure there are plenty of people that will file this movie under “good bad”, but I can’t do it. There are many other “good bad” movies out there that I’d rather watch, so look out for a Spook Show Cinema on one of those. I’ll leave you with this little fun fact. It took me a week to write this because I didn’t want to think about this movie. I only followed through on writing about this one to save you from bitter disappointment.